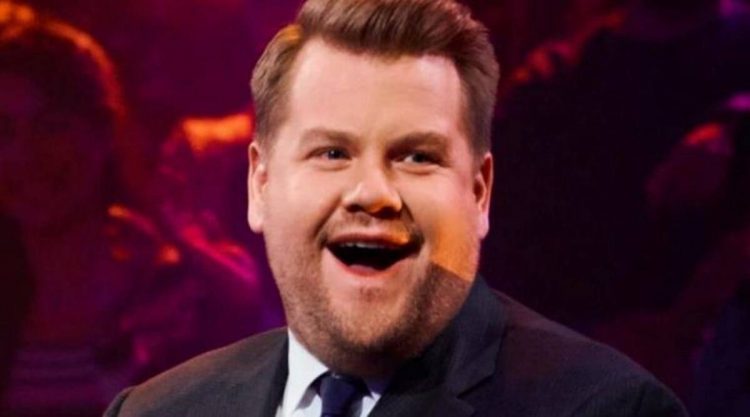 For years, late-night television host James Corden has played a food-based truth or dare with celebrities called “Spill Your Guts or Fill Your Guts.” Participants choose to either answer personal questions or take a bite of a food deemed disgusting to eat, like ghost pepper hot sauce, a sardine smoothie or dried caterpillars.

“Wow, it all looks so terrible,” Jimmy Kimmel, host of late night show “Jimmy Kimmel Live!” said as he appeared on Corden’s segment in 2016. “I know people can’t smell it, but it doesn’t smell good, either.”

While the segment has received scrutiny in the past, an online petition posted this month has brought renewed criticism that its portrayal of Asian foods as disgusting is harmful. More than 46,000 people have signed the petition, asking Corden to change the food options on the segment or end its run.

“Everyone is entitled to their opinion on food,” said Kim Saira, 24, a Los Angeles activist who organized the petition and set up a protest last Thursday near Corden’s studio, posing behind a sign that said “Delicious, Not Disgusting.” “My whole point is that James Corden is a white person and is actively using ingredients from Asian cultures and profiting from it and showing it in such a negative light. There’s a way to not like foods and still be respectful about it.”

Saira said she was confused when she first watched the segment featuring balut about two years ago.

Balut, a fertilized duck egg, is a late-night snack Saira grew up eating when she visited relatives in the Philippines every year. She has memories of sitting around a table with her family during power blackouts, which were common, eating the balut by candlelight while they told stories.

“I didn’t know why they were calling a food that was so sentimental ‘disgusting,’” said Saira, who is Filipina and Chinese American.

Corden has been doing the bit for years. A YouTube playlist created by his program has videos as far back as 2016. Speaking to Howard Stern on his radio show June 16, Corden addressed the controversy.

“The next time we do that bit, we absolutely won’t involve or use any of those foods,” Corden said. “Our show is a show about joy and light and love. We don’t want to make a show to upset anybody.”

Corden’s staff did not respond to requests for comment for this article.

“We’re in a kind of cultural moment where bits like this one exist with this increasing acceptance of cultural foods,” said Alison Alkon, professor at the University of the Pacific. “We’re kind of in this Ping-Pong dialectic.”

Using food to prompt a response of disgust, for entertainment, has a long history, said Merry White, anthropology professor at Boston University. In the United States, the game show “Fear Factor” challenged contestants to eat foods with ingredients like fish eyes, cow bile and coagulated blood paste. Reactistan, a YouTube reaction channel, has had Pakistani people try foods that were strange to them, like American hamburgers, doughnuts and candies such as Ring Pops and Airheads.

Even Corden, who is British, hosted a segment using foods from his homeland, such as haggis and a smoothie with fish, chips and mushy peas.

Lok Siu, associate professor in the Department of Ethnic Studies at the University of California, Berkeley, said the practice disrespects people’s cultures. The choice of Asian foods has made Asian Americans feel more vulnerable or marginalized during a time of rising violence against them.

The perception of Asians in the United States has historically been defined through food, Siu said.

“You use food as a metaphor to describe that distance, the kind of strangeness between a group of people that you don’t understand and their habits, the way they’re eating, the smell that comes with the spices,” she said. “There’s something around the way we discuss food, the way we think about food in our acceptance or rejection of it, it’s a rejection of a culture and the people that’s associated with it.”

She added that Corden’s use of Asian foods on the segment defines which foods are considered mainstream, delicious or disgusting; food is a metaphor for what is considered normal.

“Why is this not seen as racist immediately?” Siu said. “If he made fun of any other group, would there be a much more broader understanding that that’s racist? It’s not immediately thought of as being racist and damaging because it’s Asian food. There is such a denial of anti-Asian racism in the U.S., and this is a prime example of it.”

In Corden’s most recent episodes, he has served up blood and pork jelly, scorpion-dusted plantains, a 1,000-year egg nog (made with 1,000-year eggs), cow tongue, turkey testicles, an ant-covered corn dog and a salmon, tuna and fish-eye milkshake.

For some Filipino chefs, who grew up eating some of the ingredients that have been mocked on Corden’s show, the renewed focus on the segment has stirred up memories.

Lou Boquila, chef and owner of Perla, in Philadelphia, said he remembers questioning why he ate balut — which tastes of duck broth, and other ingredients like intestines, tongues or blood — when he was growing up in the United States.

“It’s actually very delicious, nothing out of the ordinary for us, but it put us in a different light,” Boquila said. “If you look at all the great chefs, they use every part of the animal.”

“You try American food, speak American, it made you not proud of what you ate growing up, and I was totally stupid for not standing up for it,” he added. “It steers you toward being more Americanized and turning back on your culture.”

Javier Fernandez, chef and owner at Kuya Ja’s Lechon Belly, in Rockville, Maryland, said “Spill Your Guts” presents an opportunity for him to educate people about Filipino food, the culture and ingredients like pig’s head and pork blood (also featured on Corden’s show).

“When people talk about Filipino food or these non-American ingredients where they feel it’s gross to see, it does better for the culture,” he said. “It helps promote what the cuisine is like. My job is to promote the cuisine itself.”

This article originally appeared in The New York Times.