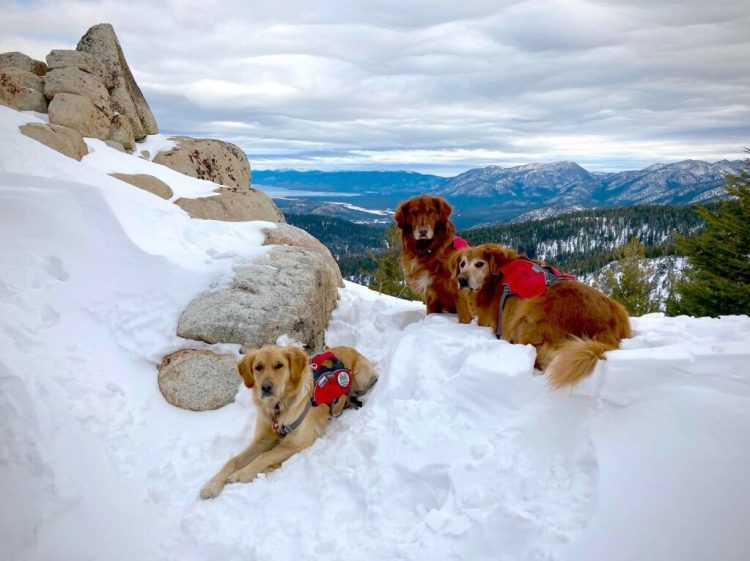 Many dog lovers will say their K9 “saved their life,” but for people caught in avalanches, a dog could literally be the difference between life and death.

All around the Lake Tahoe Basin, fluffy heroes and their handlers have spent hundreds of hours being prepared for worst case scenarios.

There are a couple of reasons why dogs make good members of search and rescue teams.

Ricky Newberry, senior director of mountain operations for Kirkwood Mountain Resort said a dog’s ability to smell and their ability to navigate alpine terrain make them ideal search and rescuers.

“Outside of a person being competent in the snow, a well-trained dog is your best chance for survival,” Newberry said.

That reality played out in real time in January 1993 when Kirkwood employee Jeff Eckland was caught in an avalanche at the resort. Avalanche dog, Doc, saw it happen and quickly alerted ski patrol to help find Eckland. He was successfully rescued.

However, even with a dog’s innate abilities, handlers spent hours over many years making sure they and their dogs are ready.

Heather Dent is a lead ski patroller at Kirkwood and has been working with dogs for many years. She lived in New Zealand for 20 years as a ski patroller in the winter and a champion surfer in the summer. She worked in agriculture and was always around cattle dogs.

Her current dog, MoMo, is a direct descendant of a dog she met in New Zealand. Dent said the most important part of training is building a good foundation. Then most of the training is basically just playing hide and seek with the dogs.

The handler will hide with the dog’s reward toy and when the dog finds them, they will play with the toy together while the handler gives the dog lots of praise.

The game eventually gets harder and harder with different people hiding and them hiding farther away.

WOOF is a team of highly trained professional volunteer dogs and handlers who are on call for search and rescue in the basin’s backcountry and surrounding areas.

Cablk said they will build snow caves to put people in, along with the dog’s favorite toy. The toy is a reward for finding the person.

“It’s a progression of seeing their handler be buried and then digging them out of the snow, progressing to the same drills with someone they don’t know being buried and digging them out,” said said Shannon Maguire, a ski patroller and handler at Sierra-At-Tahoe.

While some trainers will train the dogs to find pieces of clothing, Cablk said she wants the dogs to be trained to find people, not their packs or clothing items that may have separated from them during the avalanche.

“People don’t realize how difficult it is to dig in snow that has shifted and been compacted,” said Cablk. “Imagine exerting the energy to dig just to find a glove.”

However, Maguire said teaching a dog to alert differently when they find clothing items and gear than they would when they find a person because seeing where the separated items are can still help form a picture of where the person caught in an avalanche may have been buried.

To become a validated dog, the dog and handler must pass a test that includes sending the dog out into a designated area that has 0-3 people buried. The dog has a limited amount of time to find the people or determine no one has been buried. The handler doesn’t know where the people are or how many have been buried.

Other training includes getting on and off chairlifts, riding snowmobiles or snowcats, running close to handlers while they are on skies without getting hurt and interacting with the public.

When most people think of avalanche search and rescue dogs, they often picture Golden Retrievers and while they do make great avalanche dogs, there are several breeds which are also good at the job.

Dent’s dog, MoMo is a Blue Heeler and Australian Shepherd mix. MoMo is smaller so Dent is easily able to pick her up if necessary. Because she’s a cattle dog, she always sticks close to Dent and she has a loud bark to alert Dent of a find.

One of the other validated dogs at Kirkwood is Pearl, a Labradoodle and Pointer mix. She’s bigger and will search further away from her handler, Nathan Fried, so she can cover more ground. MoMo and Pearl often work searches together.

Newberry is training a Red Golden Retriever, Althea, who is validated and is training her son, Captain. One of Captain’s litter mates, Esha is also being trained.

But really, any hunting, hearing or retrieving dog can make a good avalanche dog.

While not everyone is a fan of dogs being required to work, it should be noted that these dogs are happy and well loved.

“Avalanche is super fun for the dogs and it’s relatively easy for them to pick up,” Cablk said.

Dent said it’s like the joy of skiing on a powder day but it’s everyday.

“It’s cruel for them not to work,” Dent said.

“I know my dog sure loves coming to work,” Maguire said. “If I think about leaving him home, he starts yelling at me. All I know is the dogs up here love coming to work. They love their jobs. And they love what they do.”

Sierra-at-Tahoe has the Sierra Avalanche Dogs nonprofit that helps support the dogs and promote avalanche training.

Kirkwood Rescue Avalanche Dog, KRAD, is a nonprofit that helps provide insurance, food, uniforms and training for the dogs.

And when it comes to retirement, the handlers say the dogs tell them when it’s time to retire.

“I think it’s somewhat relative to the life the dog has lived up until the point. When they are tired, we don’t want to hurt the dogs. When they reach the point where it’s not fun for them anymore, they get to just enjoy being pets but take the weight off their joints,” Maguire said.