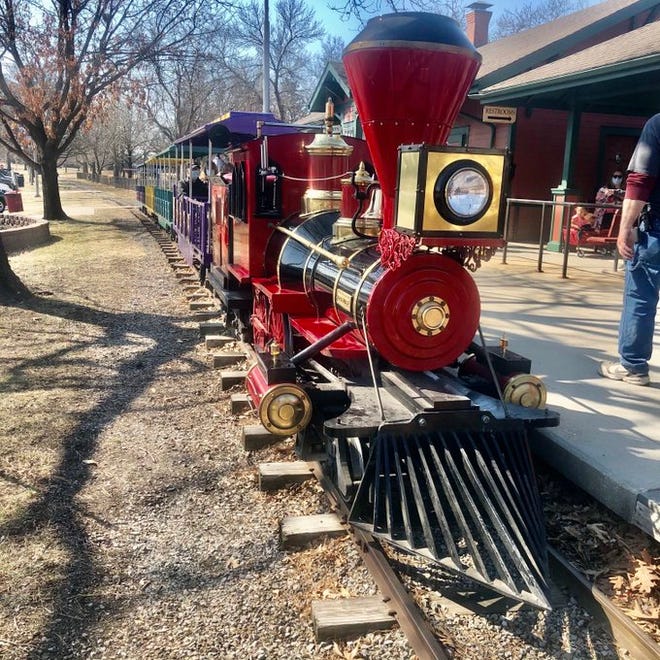 Twenty-eight people and one dog rode as passengers Saturday morning as the Gage Park Mini-Train made its first trip of the year.

That dog was Keelee, a 14-year-old Boston Terrier/Jack Russell Terrier mix who sat in front with her owners, Topekans Carl and Janice Palmer.

Keelee loves riding the train, which she gets to do on a regular basis when it’s running, said Carl Palmer.

“I’ve never met a dog this smart,” the 83-year-old Palmer said. “She goes out in the morning, gets the paper and brings it up to the house for me. And the mailman hands her the mail and she brings the mail up to the house.”

The Palmers, their adult daughter, Shelly Cramer, and Keelee showed up more than 15 minutes early for Saturday’s 10:30 a.m. event.

Skies were fair and temperatures in the 50s as Bill Hollingshead, an engineer for the mini-train for 10 years, greeted the 15 adults and 13 children who joined Keelee for this year’s first trip.

Those passengers enjoyed a mile-long excursion, which lasted about 10 minutes and included passing by a small lake and going through a tunnel and over a railroad bridge.

The cost is $2 to ride the mini-train, which Topeka Capital-Journal archives show was opened by the city of Topeka’s parks and recreation department at Gage Park in August 1967.

The mini-train’s locomotive runs on diesel fuel and was built as a scale replica of an 1881 Santa Fe Alan Herschell Iron Horse “Cyrus K. Holliday” model.

The mini-train carried a total of 70,160 passengers in 2019, McLaughlin said. Ridership was limited last year because of the COVID-19 pandemic.

But there’s one exception to that. Members of the same family may sit in rows directly adjacent to each other from front to back.

The Gage Park Carousel, which is more than 100 years old, also opened Saturday to the public for this year, McLaughlin said.

When Should You Neuter Your Dog to Avoid Health Risks?