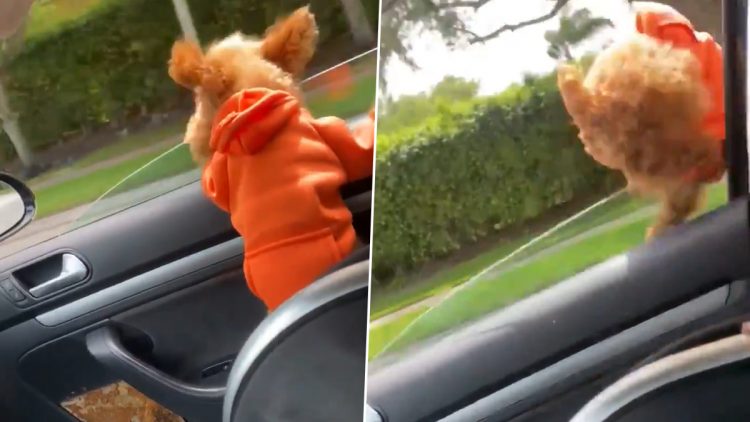 OMG! What did we just see? Ginger, a toy poodle, was enjoying her car ride, and out of nowhere, jumped out of the moving car window in the most dramatic way possible. The heart-stopping moment has gone increasingly viral on social media, receiving millions of views, with pet owners now thinking twice before taking their pups out on a car ride. Luckily, the dog survived and was left unscathed. Ginger, the toy poodle, is now internet fame as the footage of the happy dog, pulled away by the wind, surfaced on Instagram and Twitter.

Social media is filled with dogs’ videos, and most of them are undeniably cute. We have even seen footages of doggos enjoying car rides with their hooman, and the wind touching their adorable fur face. Ginger’s human was driving along with the camera set up to capture a similar moment, because who doesn’t love to see that? Reports noted that the pooch is apparently a shy little pupper, and just peeks out a tiny bit. So there was no reason that the pet parent would have suspected that. Cute Dog and Dolphin Zoomies Will Make You Say Aww.

Ginger can be seen taking her whole head out of the window in the viral video, balancing her tiny front paws on the open frame, suddenly leapt or was pulled out of the window by the wind. The dramatic footage is making people go, ‘Whaaatttt!!!! Is she okay?’ and other reactions. Two Dog BFF Dogs Talking to Each Other via Video Conferencing Call Amid the Pandemic Goes Viral.

Thankfully, the pooch is unharmed, but the heart-stopping moment is sure making pet parents think twice before taking their dogs out on a car ride. Many shared videos of their dogs peeking their head out of the front seat window on the moving car, noting if that would happen again; others share plenty of advice for dog owners to avoid any further accidents.

It’s good to laugh the pain away later after you knew she was okay, but I wouldn’t be able to handle something like this in real time. This would’ve messed me up all the way 😟😢

No One Would Have

Ginger is sooooo lucky! I couldn’t imagine seeing my puppy flying out the window like that

Ok let me roll my windows up! 🤣 pic.twitter.com/T74jgEDToE

That’s How You Do It!

This how you do it, you attach the leash to the passenger headrest. Dog belt 🙃 pic.twitter.com/iQ1jcbOmlc

Tell Ginger she gotta be a lil taller and heavier pic.twitter.com/CmY7lkVA4Y

My dog loves when I drop the top down 😂🥰 pic.twitter.com/m7jJMC7aA2

This reminded me of this video of Gravs pic.twitter.com/n8FureNNcD

The internet is so relieved knowing that Ginger was okay. While her adventure may have been traumatising for her hooman and the whole internet who watched the video, Ginger was able to move unharmed.

(The above story first appeared on LatestLY on Mar 12, 2021 09:11 AM IST. For more news and updates on politics, world, sports, entertainment and lifestyle, log on to our website latestly.com).