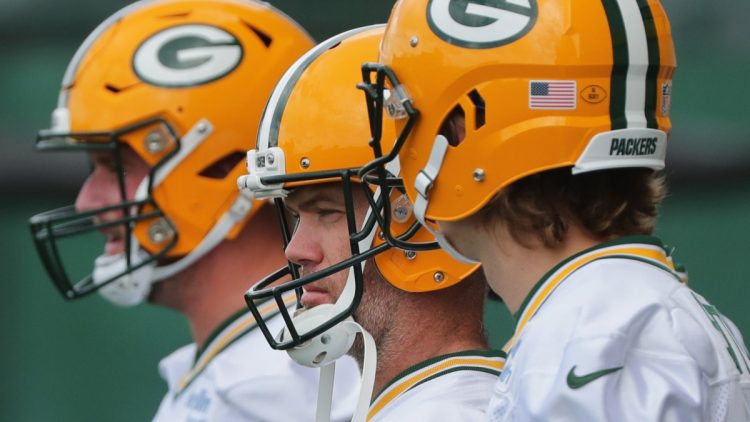 K Mason Crosby: Crosby made all 16 field-goal attempts in 2020, becoming just the sixth kicker in NFL history to be perfect (minimum 16 attempts). It continued a superb run since that infamous day at Detroit in 2018. Over the past 47 games (including playoffs), Crosby has missed four field-goal attempts. He missed four in that unfathomable performance at Ford Field. He’ll enter the upcoming season with 18 consecutive makes, third-longest in franchise history behind his runs of 19 (2013-2014) and 23 (2010-2011). He ranks 20th in NFL history in scoring and fourth in playoff scoring.

K J.J. Molson: An undrafted free agent in 2020, Molson signed to the practice squad just before Christmas to provide some COVID insurance. In four seasons at UCLA, Molson made 51-of-74 field-goal (68.9 percent). He made just 8-of-14 as a senior. As a sophomore, he made 17-of-21 for a career-high 81 percent. As a junior, Molson made a career-long 50-yarder. While his accuracy declined as a senior, he blasted 53 of his 61 kickoffs for touchbacks.

P Ryan Winslow: As was the case with Molson, Winslow was signed late last season to provide COVID insurance. An undrafted free agent in 2018, Winslow punted six times in two games for the Arizona Cardinals in 2019 in place of veteran Andy Lee. He had a net average of 44.2 yards on those kicks. His father, George Winslow, punted for Wisconsin and the Cleveland Browns.

LS Hunter Bradley: Over the past 20 NFL drafts, 13 long snappers have been selected. That includes one each from 2015 through 2020 and two in 2021. A seventh-round pick in 2018, Bradley hasn’t been nearly consistent enough. His miles-off-target snap in the playoff game against the Rams led to Crosby getting tackled and suffering a minor shoulder injury. Somehow, Bradley went through training camp last summer without a challenger. He’s got a challenger this year.

LS Joe Fortunato: Fortunato snapped for Delaware from 2012 through 2015. He hasn’t snapped in a game since the Blue Hens’ victory over Elon on Nov. 21, 2015. Not only has he not snapped in a game for five seasons, this will be the first time he’s competed in a training camp. “Sometimes, I think maybe I’m a little crazy,” he said.

One: Can new special teams coordinator Maurice Drayton cure Green Bay’s chronically bad special teams? In the two years under former coordinator Shawn Mennenga, the Packers finished 29th in Rick Gosselin’s annual special-teams rankings in 2020 and 26th in 2019. It’s finished 20th or worse in six of the past eight seasons. That includes ranking 26th in 2019, 32nd in the final season under Ron Zook in 2018, 29th in 2016 and 32nd in 2014. They have not fielded a top-10 unit since 2007. It takes some effort to be that bad, that often. Can Drayton turn things around to at least reach mediocrity?

“I think those guys are going to be a top-five special teams unit,” Denver Broncos special teams coordinator Tom McMahon said of his understudy during their days in Indianapolis.

Two: Will there be a new punter? Scott did finish last season on a high note; his net average in the playoffs ranked fourth in the league. And his work as a holder is easily overlooked. But Winslow has at least punted in the NFL with some success, so this isn’t some unheralded rookie to provide token competition. In fact, this will be his fourth consecutive year in an NFL training camp, so he’s had plenty of time to hone his craft.

Three: You can’t help but pull for Fortunato. Six years out of college, he’ll finally be competing in an NFL training camp. That’s stick-to-it-iveness.

“I can’t even explain how fired up I was and how excited I am right now,” he said after signing. “Just walking out on that field after I signed, it was incredible, man.”

“He’s shown the ability to be accurate in the placement of the ball in what we call shorties as well as longies. He did a great job there,” Drayton said. “And then they had a protection phase, where he displayed the ability to protect. Now, it’s not the same as protecting on game day or in practice, but from the evaluation phase, he showed some traits that says it will be transferrable to the game film. At the end of the day, he still has to do it, and you can’t count out Hunter. It’s going to be real interesting. It’s far from over.”

Four: Green Bay ranked 25th in kickoff-return average and 31st in punt-return average last season. Talk about brutal. The Packers used a third-round pick on Clemson receiver Amari Rodgers. Rodgers handled punt returns at Clemson but, aside from a touchdown vs. Boston College in 2018, he wasn’t an impact player in that phase. He’ll be among the front-runners, nonetheless.

“He catches the ball. Our No. 1 job as a punt returner is to give the ball back to the offense,” Drayton said. “He has a great idea on how to track a ball. Now, granted, the wind conditions and elements here in Lambeau and our region will make a play on that, but we have time right now. He’s just doing a good job right now of tracking the ball. His catch point is the same on every catch. His approach to it, he understands the importance of it, and that’s what makes him very valuable to us right now as a prospective punt returner.”

On the potential impact from this year’s rookie class:

“I tell you, this draft class, I’m really excited about it. In no particular order, I really love Shemar (Jean-Charles) out of Appalachian State. He has an attitude about teams that I really like. Excuse my phrase, but he has this dog mentality that’s kind of infectious, so we like him a lot. Of course, Amari, looking forward to big things out of him, very smooth athlete, very smart, heady. Eric Stokes, if called upon, he will be ready to play, as well as Kylin Hill. Just pleased with that group.”

Feature: Jake Dolegala wouldn’t take “no” for an answer

24 Days: The triumph of turnovers and the one that got away

20 Days: How many kicks has Crosby missed since 2018 at Detroit?

15 Days: These five players must rebound