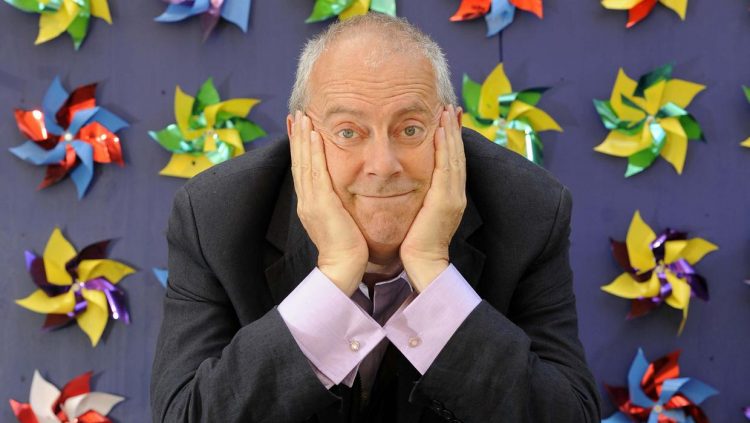 Gyles Brandreth is extolling the benefits of humour. “What the world needs now is jokes – and the more of them the better,” he insists cheerfully.

o prove the point, he reels off a rib-tickling selection – from classic knock-knock jokes to puns and Shaggy Dog stories – which all feature in his new book, The Best Worst Joke Book In The World! What’s Black & White & Red All Over?

“A lot of them are ‘Dad jokes’, like, ‘What’s black and white and red all over? A sunburned Zebra’. Jokes don’t have to be good – in fact, often the worse they are the funnier they are,” he declares, revealing he tested many of the jokes in the book on his seven grandchildren, aged four to 16.

Genial, witty and exuding seemingly endless energy and enthusiasm, humour is just one string to the 72-year-old’s bow. He’s worked in politics (he’s a former Conservative MP) and is an author, actor, presenter and a regular on comedy panel shows, such as the BBC’s Just A Minute.

Humour, he believes, can bring vital light relief during dark times. “It can be such a lift to the spirits to laugh at silliness and jokes. Laughter really is the best medicine,” he asserts.

“Dark times produce jokes because sharing them and groaning about the bad ones helps us establish social bonds,” he adds. “For instance, ‘Let me tell you my favourite coronavirus joke – of course, we’ll have to wait two weeks for you to get it!'”

Science is on his side too: “It’s also been proved that physical things happen to us when we laugh – endorphins in the brain are released and promote a sense of calm and wellbeing.”

Brandreth, who – tongue-in-cheek – describes himself as a ‘Master of Funny’, has collected jokes for 50 years. He’s written a string of joke books and in the Eighties provided funnies and riddles for a leading breakfast cereal brand and a Christmas cracker company.

Currently, he’s starring with Sheila Hancock in Channel 4’s Great Canal Journeys, where humorous bickering and banter are the order of the day.

The pair are following in the boating footsteps of Timothy West and his wife Prunella Scales, who turned the charming show, where the devoted pair gracefully coped with Scales’ dementia, into cult viewing.

“It was perfect for us, as we both talk non-stop – although Sheila wouldn’t agree and says I’m the one who never shuts up. Funnily enough, my wife says the same thing about me,” Brandreth notes.

The experience further cemented his conviction that ageing is “just about numbers and irrelevant. Sheila’s 87 and fitter than I am – a lot sharper than me, quite frighteningly so at times! Judi Dench (85) is another pal and, like Sheila, still learning her lines and is as busy as ever. So I’m definitely not having anything to do with ageing or retiring.”

Maintaining his own mental agility is one the reasons he’s learnt a poem a day since the first lockdown in March. He’s added to that challenge during the current restrictions by learning a joke a day.

He shares these daily learnings on Instagram, always wearing one of his huge collection of flamboyant novelty jumpers, which he’s resurrected. They were a talking point back in the Seventies and Eighties, when he sported them as a presenter on TV-am and Countdown.

“Learning poetry by heart keeps the synapses in the brain going, which can literally help to delay dementia,” he says.

“It’s relatively easy to do, if you stick to my rule of learning only two lines a day. By the end of a week, you can learn a short poem or a whole Shakespearean sonnet.”

Brandreth’s been a devotee of humour since he was a child, when his father loved telling jokes and playing practical tricks.

“He balanced telephone directories on top of a door, which would fall as you open it, and had a special dribbling wine glass with tiny cracks in it, so you dribbled when you drank,” he recalls. “He was always teaching me poems and silly rhymes, so I grew up with laughter.”

There was a time though when it became hard even for Brandreth – who describes himself as someone who naturally sees the “glass as half full, rather than half empty” – to see the funny side.

“I had a difficult period in the Nineties, when my father, my sister and brother died, and so did my best friend, actor Simon Cadell,” he says. “Then in 1997, I lost my seat in parliament and overnight wasn’t an MP anymore. People tell you not to take it personally but I did, it was a huge disappointment at the time.”

He eventually went to see the late Irish psychiatrist, Dr Anthony Clare, to talk about happiness. “I learnt so much, I wrote a book about it (The 7 Secrets Of Happiness). One key thing he told me that could, I think, be relevant to our difficult times, is that when people are tested and challenged and have a sense of common purpose, it can surprisingly be a key element in helping them find happiness.

“People who lived through the Second World War often described it as one of the happiest times of their life, despite the dangers and trials, because they went through a shared experience. You rarely find people who are sitting around not doing much who are happy. That being said, while it can have a positive effect for survivors, in this case, obviously not if you’ve suffered physically or mentally by having the illness or losing people to it,” he adds.

He tries to safeguard his own health with a low-carb, fish-based diet, and exercises by walking and riding a tricycle so he can avoid public transport.

“I was inspired by the late film star, Olivia de Havilland, who I knew. She rode a tricycle around Paris right up until she died this year at 104,” he says.

He’s clearly content: “I go to sleep at night counting my blessings. I enjoyed a wonderful childhood. I’m lucky to have had the same with my three children and with my grandchildren. Family life is the best thing in the world.

“I aim to tricycle into the sunset,” he adds, “cracking jokes and reciting poetry….”

The Best Worst Joke Book In The World! What’s Black & White & Red All Over? by Gyles Brandreth, published by Penguin, £9.99

Leave it to Biewer: New dog breed to join many US shows