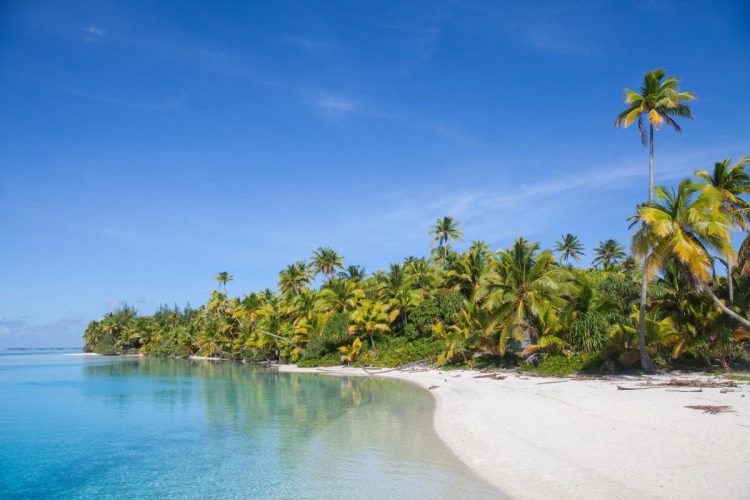 Having  already spent a week on Rarotonga, Craig McLachlan decided to head to the tropical paradise of Aitutaki.

We are woken each morning about 2am by Aitutaki’s impressive rooster population and they barely let up for the next five to six hours. The roosters seem to go off together, spur each other on and roam the island at will.

Still part of the Cook Island’s southern group, Aitutaki is a 45-minute flight north of Rarotonga and has long held the reputation as boasting the world’s most beautiful lagoon. In my opinion, that reputation is well deserved.

We’re also here for a cultural experience, and we’re getting it — no plush resorts for us. I booked an Airbnb run by locals Ross and Enoa and we’re in a simple unit, one of two, on their sizeable property, 400m from the wharf, in the town of Arutanga.

The island’s population is 1800, and most international visitors — these days only Kiwis or foreign nationals who have been in New Zealand for at least 14 days — opt to stay in the up-market Aitutaki Lagoon Resort & Spa or the Pacific Resort.

The rooster experience is a lot different from our time on Rarotonga. The Cooks’ main island seems overrun by dogs. Every family seems to have a couple that are treated like family members and roam the neighbourhood, rarely tied up.

Aitutaki has no dogs. Local legend says that a chief’s daughter was bitten by a dog years ago and that was it for the canine population. These days, it’s an Aitutaki law that no dogs are allowed on the island.

So, while Rarotonga has its dogs, Aitutaki has its chooks. They’re everywhere, and as part of our cultural experience, our neighbour can be heard yelling for her roaming chooks to come home about 7am and 5pm each day. The rest of the day they roam free, and we’ve had some close calls with chooks scurrying across the road when riding around on our scooter.

While there are rental cars on the island, the locals’ main mode of transport is the scooter. No-one wears helmets and two to a scooter is the norm, not the exception. Little kids are often seated behind or on the lap of a parent.

We’ve joined in with great enthusiasm and a fun part of the experience has been the “eyebrow raise” greeting as we pass locals on scooters heading in the other direction. It seems that everyone knows everyone on an island this small and after only a few minutes on our scooter we were greeting one and all, too. It’s a lot different than visiting Japan, where the accepted greeting is a nod of the head downward. On Aitutaki, it’s the eyebrow raise, with chin up and a great big grin.

The roads here are in great shape, perfect for scooters, and Aitutaki locals take great pride in keeping their properties spick and span, right up to the roadside. Each house receives an inspection from the health authorities every three months and garbage is carefully sorted for recycling. We’re drinking rainwater off the roof, boiled before consumption.

Our accommodation, while simple, is clean and comfortable. There’s a Wi-Fi hot spot 100m away at the

main building, and there’s so much fruit growing on the property that Enoa has told us to help ourselves. The passionfruit hanging from

the vines is exquisite.

We’ve complemented that with bananas and papaya bought at roadside stalls and the island’s simple stores that the locals frequent. Enoa has also brought us local delicacies to try, including a tasty banana and cassava concoction, Aitutaki poke made from coconuts and cassava, and addictive breadfruit chips.

Saturday morning, we headed down to Aitutaki market at 7am, where I had breakfast of barbecued flying fish and boiled cassava with the locals — a real treat.

Most beautiful lagoon on the planet

While the cultural aspects of our visit have been enthralling, it’s the lagoon that is Aitutaki’s big drawcard. It’s a place I’ve wanted to visit for decades, and the spectacular hues of turquoise, green and blue are totally captivating. The reef-fringed atoll is triangular in shape, with the main island in the northwest and gorgeous tiny motu (islands) scattered around the outside of the triangle. The lagoon is so big that it’s said that the whole island of Rarotonga would fit within its confines.

On our Teking Lagoon Cruise, guide Pa brought along his 3-year-old son Morris for the day. Numbers of visitors are picking up, and while trips were heading out daily pre-Covid, they’re only operating a few days a week at this stage.

We took along our own snorkelling gear and made the most of the day with 10 other guests on the cruise. We swam and snorkelled among giant trevally that were indeed giant — and a tad scary! Pa told everyone to take off earrings, rings and anything else shiny, in case the massive fish mistook a shiny object such as an earing for food and chomped on an ear!

Next up, we snorkelled among purple coral, before a real highlight, a 400m walk through waist-deep waters from an offshore sandbar to One Foot Island. This spot is in the southeast corner of the lagoon and represents the perfect motu — white sand, swaying coconut palms and sparkling clear waters. Visitors can get their passports stamped on One Foot Island, a priceless souvenir of any trip to Aitutaki.

Last stop was a visit to where Teal’s giant Solent flying boats refuelled when they plied the island-hopping Coral Route between 1951 and 1960. Teal in 1965 became Air New Zealand and the Coral Route from Auckland to Tahiti included stops in lagoons in Fiji, Samoa and Aitutaki.

Aitutaki’s lagoon is 20km across at its widest point, making it a lengthy runway for the flying boats, which refuelled on Akaiami Island while passengers played on the beach.

Our day trip was so enjoyable that we took a taxi boat back to Honeymoon Island a few days later for some private time on this perfect island.

In my mind, Aitutaki really is the most beautiful lagoon on the planet.

As with other island groups in the Pacific, the Cook Islands took to Christianity with great zeal, and the number of churches on the various islands is mind-boggling.

Aitutaki was the first of the Cook Islands to be Christianised, when the Rev John Williams and missionary Papeiha of the London Missionary Society (LMS) turned up on October 26, 1821, from the Society Islands, in what is now French Polynesia. After converting Aitutaki, the LMS missionaries moved on to Rarotonga.

October 26 will mark 200 years since the LMS arrival on Aitutaki and extensive celebrations are planned, though it’s hoped that the impact of Covid will be negligible.

Enoa tells me that 4000 visitors are expected for the two weeks of celebrations. For an island of only 1800, that sounds like a logistical nightmare, but apparently everything is under control. An estimated 100,000 Cook Islanders live in New Zealand and Australia and a fair few are expected home for the festivities.

To say that Aitutaki’s economy was decimated by 14 months of no tourists is an understatement. While not a single active Covid case has registered in the Cook Islands, the economic tap was turned off with lockdowns in New Zealand and Australia, plus the understanding that if Covid reached the Cooks that there would be a total health disaster.

Island populations were decimated when Europeans first turned up a couple of centuries ago, bringing diseases that the islanders had never had to face and to which they had no immunity. A similar disaster could well have occurred in 2020 should Covid have reached these shores.

As in New Zealand and in other countries around the globe, there was debate here on Aitutaki as to when tourists should be allowed back. Older locals wanted the island population to be fully vaccinated before the island opened up, but the younger population was for the economic benefits of bringing in tourists sooner.

All is good now, though. Almost the entire population over the age of 16 had their first jab at the start of the month. There’s a growing confidence among locals, especially seeing the increase in numbers of visiting tourists over the week we’ve been here.

Enoa explained it well: “There was a real Covid shock here on Aitutaki. With no tourists and no other form of income, locals went back to the old ways, planting crops and pulling together in families and villages to overcome the economic hardships. There have been some positives. We are now exporting taro to New Zealand. The boats that bring the things we need to survive here on Aitutaki now head back with some Aitutaki exports.

“And it’s good for the health of the community. Locals have been growing and eating their own food, becoming self-sufficient.”

One problem though is that a number of younger islanders headed to New Zealand for work once the one-way bubble was up and running in late January. There’s a real worry here that some of those locals won’t come back.

I hope they do. Aitutaki truly is a Pacific paradise.

Learn About Your Dog's Breed and Health With This DNA Test