How Many Teeth Do Adult Dogs Have & When Do Puppies Lose Baby Teeth? 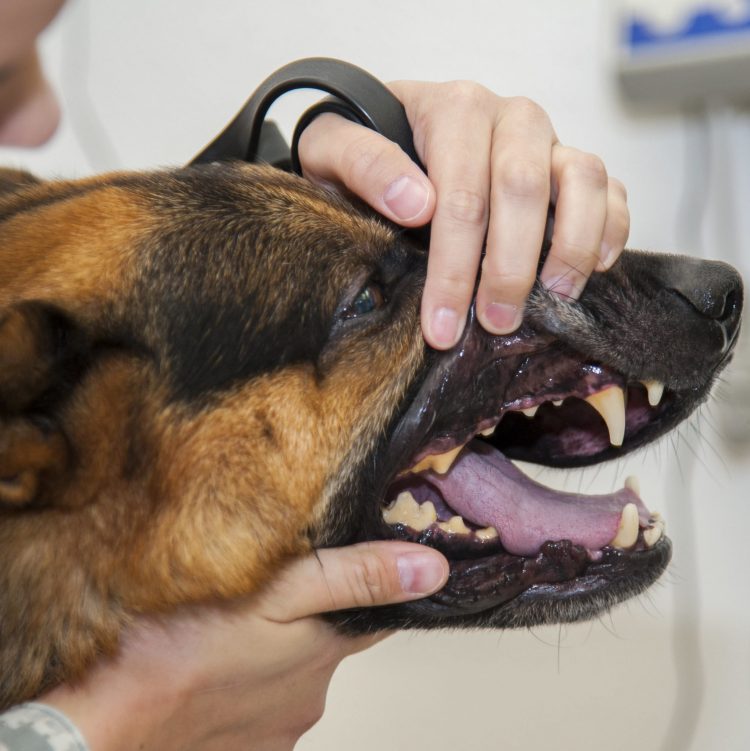 How Many More Than Us?

A fully grown dog has on average about a third more teeth than a human being. By the time the latter reach adulthood, they have 32 permanent teeth – ten less than their furry friends’ 42. Puppies, on the other hand, possess 28 baby teeth – eight more than human babies who have 20 deciduous teeth. 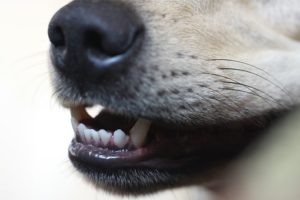 When it comes to functionality, the domesticated dog maintains the same dental formula as his cousin from the wild to help him when eating, grooming, and for his defense. He uses his fangs for gripping and piercing things, incisors for nibbling at objects, premolars for tearing and molars for crushing bones.

In terms of numbers, the adult canine has twelve incisors in total: six on the upper jaw and another six on the lower one. Incisors come in handy when nibbling bits of meat from bones, when grooming himself and other dogs, as well as greeting. Grooming and greeting are both important rituals for bonding and maintaining pack order among dogs. His canine teeth are four in number and are used to hold objects in his mouth and to defend himself when necessary.

At the back of the canines are four premolars on each side of the upper and lower jaws. These are used to rip chunks of flesh from their prey thanks to their shearing action. More aggressive breeds still display wolf-like habits while eating in that they grab meat with their premolars and rip it off the bone. Premolars are also used to chew on bones, rawhides and other chew toys. The way they normally do this is by holding the toy between their paws and using these strong pointed teeth to grab the toy as they tilt their jaws to the side.

As for the molars, there are two on each side of the upper jaw, while the bottom one has three. Molars are for crushing bones and other food items like large biscuits. 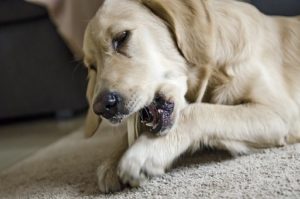 During their lifetime dogs develop two sets of teeth just like their human counterparts. The baby teeth break out of their gums somewhere between the third and sixth week after birth. Since they don’t have to grind food as much as the adults, they don’t possess molars. After about four months of age, they begin to shed their puppy teeth and eventually replace them with permanent adult teeth.

Puppies begin teething at around 3 months of age and develop all their adult teeth by the time they’re 8 months old. Incidentally, larger dog breeds tend to grow teeth faster than the smaller breeds.

Puppies, in general, begin shedding baby teeth between 12 and 16 weeks of age. By the time they’re four months old, practically all of the puppy’s deciduous teeth will have been shed and most of the permanent teeth have already erupted and are in place.

It is important to watch out for any retained deciduous teeth during the teething phase. These are teeth which persist even after the eruption of permanent teeth. As a result permanent teeth more often than not end up erupting in abnormal positions leading to an incorrect bite pattern i.e. the way a pup’s teeth fit when his upper and lower jaws are closed. The other side effects of retained deciduous teeth include congestion of teeth, an undershot or overshot jaw, as well as accidental bites into the palate. The ideal jaw position is one which facilitates a “scissors bite” in which the upper incisors overlap slightly and touch the lower incisors. This stops the incisors from wearing out and keeps the teeth properly aligned. 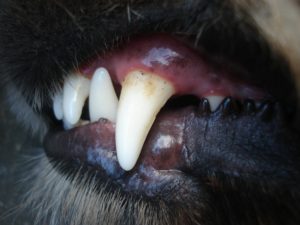 Although your dog may never have to hunt his prey, having a seriously overshot or undershot jaw can create problems when feeding as well as difficulty when playing games like fetch or Frisbee. To prevent permanent damage, it is vital to identify retained baby teeth as early as possible and get immediate dental care. Unfortunately, as with several other oral hygiene problems, retained deciduous teeth often go undetected until later in life. The problem is also more commonly associated with smaller dog breeds such as the Maltese, Poodles, Pomeranian and Yorkshire Terriers.

Other signs that point to a potential problem of retained deciduous teeth during permanent teeth eruption include halitosis (bad breath), abnormally-positioned permanent teeth, swollen or bleeding gums, and gingivitis. Your pup may also develop problems with his sinuses known as oronasal fistula.

Your veterinarian will usually undertake a complete physical of the dog including a thorough inspection of his mouth.  He will note the presence of deciduous teeth and perform an X-ray of the mouth from the inside in order to differentiate between the permanent and deciduous teeth. Once this is done he should be able to surgically remove the baby teeth as soon as the permanent ones begin erupting through the dog’s gums. 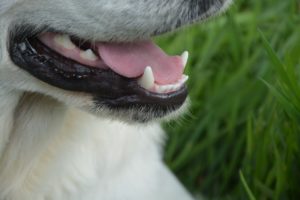 While it’s true that dogs are less prone to developing tooth cavities (because of a relatively low-sugar diet), your pup is likely to suffer from tooth problems if he is exposed to too many soft foods. That’s because they tend to leave food particles at the base of the teeth between the gum pockets. The particles, in turn, result in teeth infections, softening the gums and causing them to recede. One of the major signs that your dog has serious dental infections is foul breath, which should prompt the pet parent to see a veterinarian. Cavities are treated the same way as human cavities by drilling out the damaged part of the tooth and filling it with a special dental compound.

Another oral problem your pup may experience is tartar or the buildup of calcium salts on teeth especially if your dog is constantly exposed to hard water. Tartar eventually leads to gum disease and even tooth loss. However, it can be treated by rubbing the affected teeth with a solution of comprising hydrogen peroxide or a highly diluted solution of hydrochloric acid.

As a pet parent, you can prevent gum decay by feeding your pup on kibbled foods and hard biscuits as a way of helping scrub his teeth. Try giving your pup treats that include special ingredients meant to reduce harmful mouth bacteria. Avoiding soft foods that encourage food residue to accumulate between the gums and providing hard rubber or nylon toys for your dog to chew on can go a long way in keeping dental visits at a minimum.

It also doesn’t hurt to brush your pooch’s teeth every so often (when you do brush his teeth, make a point of using baking soda or toothpaste specially formulated for dogs – not toothpaste for humans). You may also opt to have your pets’ teeth cleaned by a professional under anesthesia once a year.

Inspecting Your Dog For Gum Disease 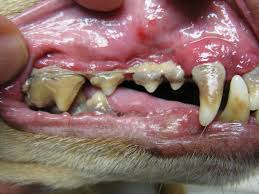 The best place to start is lifting your dog’s lips. If you notice dirty or discolored teeth, especially an unpleasant brownish-greenish color, this is a sign of tartar or plaque – a pointer to a looming gum or periodontal disease.The next step is to scrutinize the gums for any swelling or redness. Running your fingertip along the gum line will normally cause inflammation or bleeding of the gum tissues indicating the presence of a more serious gum infection and disease.

Lastly, smell your dog’s breath. If it is fetid and foul, it’s highly likely that there’s a bacterial infection. Contrary to popular belief, doggy breath isn’t always normal in dogs. If your dog’s mouth is healthy his breath should be at least neutral if not pleasant.

Both large and small dogs can experience serious dental problems. Small dogs, in particular, tend to have more issues with plaque, tartar due to their short snouts and short jaws. They’re also liable to break their tiny teeth if allowed to gnaw on hard toys. Larger dogs, on the other hand, tend to suffer from traumatic injuries to teeth and gums including fracturing or wearing of the tips of their teeth as well as broken jaws. Once the roots of the teeth become exposed dogs experience severe pain and death of the affected teeth. Aside from this larger dog breed are equally capable of developing buildup of plaque and tartar and the resultant gum and periodontal disease just like their smaller canine counterparts.

Many dog owners aren’t sure if their dogs can grow their adult teeth if they lose them. Unfortunately, unlike creatures such as sharks, your furry friend can’t regrow any lost or damaged teeth. Just as in humans, loss of an adult tooth for dogs means they lose it forever – hence the need to take maintain good oral hygiene in your pets.

Can You Tell a Dog’s Age By Looking At His Teeth?

Telling a puppy’s age is pretty straightforward since all you have to do is observe which teeth have erupted. For example, a puppy’s baby incisors usually erupt at four to six weeks of age, while the permanent incisors take root in 12 to 16 weeks’ time. The canines usually emerge by the time he’s 3 to 5 weeks old, with the permanent canines appearing in 12 to 16 weeks – just like the incisors. By the time the permanent molars are fully established, the dog is 4 to 6 months old. This means that once a dog reaches six months of age, all if not all of his permanent teeth are visible. How Often Should You Wash & Bathe Your Dog Per Week?