How To Calm A Dog Down When He’s Being Aggressive 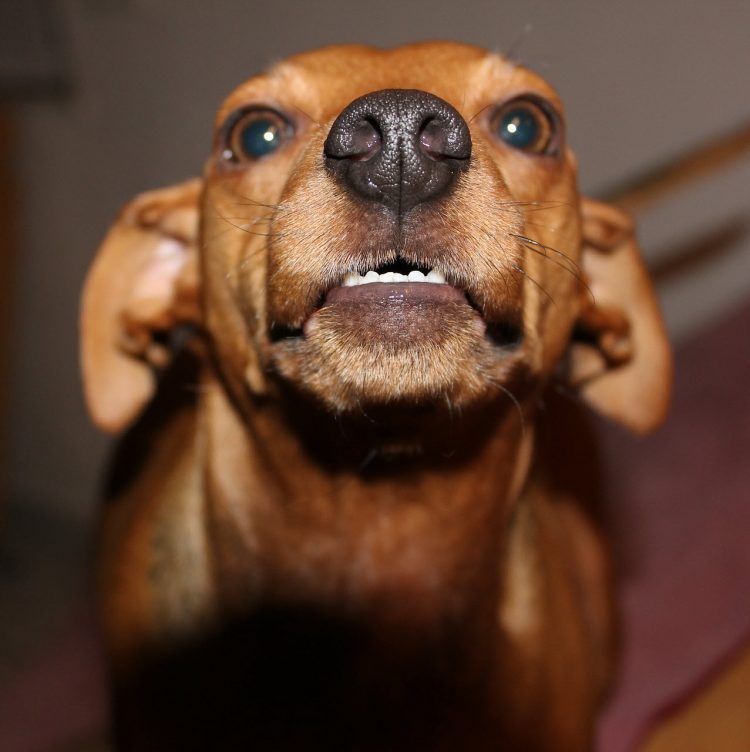 Aggressive behavior is the number-one reason why pet parents seek professional help from dog trainers and veterinarians. But the term “aggressive” can mean a whole bunch of things ranging from rigid posture and guttural barking to lunging at and biting the victim. Aggressive behavior occurs for varying reasons, so the first step towards calming your dog down is understanding why he’s displaying this behavior in the first place.

There are many reasons why dogs bite, and a lot of them have nothing to do with being mean. If you study your dog’s aggression closely you will probably identify one of the following characteristics: 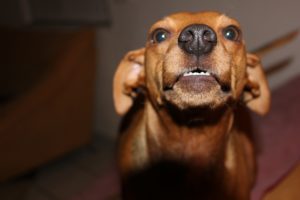 People sometimes blame aggressive behavior on the breed, but this is incorrect. Any breed can cause trouble, according to a study performed by the American Veterinary Medical Association, the CDC, and the Humane Society of the United States. The study which analyzed dog bite statistics from the last 20 years found no evidence that some breeds are inherently more dangerous than others.

The reason why people would confuse some breeds as being more aggressive than others is that the bigger breeds can cause proportionately bigger damage. However, even a Chihuahua can be aggressive, it’s only that she won’t cause the same level of injury as a powerful strong breed like the pit bull or the Mastiff.

The important thing to know is that bad dog behavior and dog problems are not premeditated by the dog. Rather it is the failure of humans to understand and meet the needs of the animal in the dog that creates the problems. When considering which breed you want to adopt you shouldn’t look at its popularity only. You need to consider whether you can take on the responsibility of looking after the dog (in terms of diet, exercise, training etc.), especially if it’s a powerful breed.

We’ve already seen how dogs socialize and associate with each other within the pack. To take command of a powerful dog breed, you need to play the role of a pack leader and create rules, boundaries, and limits. Remember that fear-aggressive dogs normally act out because they lack adequate exercise which would otherwise expend the dog’s excess energy and keep him in a healthy state of mind. Cesar Millan, a dog behaviorist with over 25 years of canine experience, puts it best when he says: “in order to talk to the mind, you need to remove the energy from the body.” 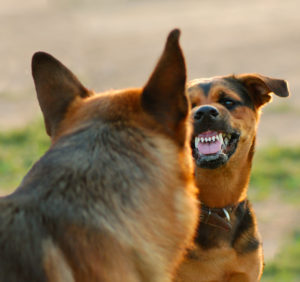 Inter-dog aggression can be caused by learning and genetic factors and is characterized by behavior like growling, lip lifting, snapping, biting, and lunging towards another dog. A dog can become overly aggressive towards other dogs because of his past experiences, including abuse and neglect. If he hasn’t adequately socialized with other dogs as a puppy or has had a traumatic encounter with another dog, he may also display insecure behavior and act aggressively.

When dogs become aggressive towards each other they are asking you to step in as the pack leader. According to Cesar Millan, whoever is strong and has the ability to lead is instinctively selected as the pack leader. But you also need to earn trust and loyalty from your dogs’ for them to see you as their leader; something that you do by giving them rules, boundaries, and limits. The moment your dogs see you as their pack leader they stop fighting for dominance because you’ve become their calm-assertive pack leader

6 Tips For Calming Your Dog

Now that you understand some of the reasons for aggressive behavior, what are practical steps can you take to keep your dog’s aggression in check? Here are 5 tips to keep your dog calm when his behavior gets out of hand.

Most dogs no longer have real jobs to do for their owners, which can make them feel useless and bored. It’s 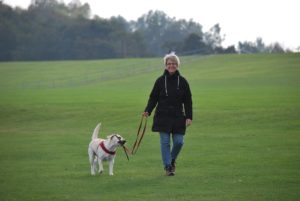 therefore no wonder that they turn to destructive behavior, including aggression, to give them a sense of purpose. An extensive exercise regimen is, therefore, a good way of treating aggression. The more energy your

dog uses up the better it is for their state of mind and the less likely they are to display aggression. The best way to exercise your dog is:

Socializing your dog at the earliest opportunity will help them grow accustomed to encounters and interactions with both humans and other dogs. The best way to do this is by taking your dog to a dog park or creating one on one play dates with other dogs to provide an environment that encourages social interaction. You may consult your vet for about enrolling your dog in a socialization class.

Tip #3. Use treats to distract

If your dog is motivated by praise, treats, and toys, then you can use these tools to help modify his aggressive behavior. When using treats, for example, you should teach him that when he sees another dog, he’ll be rewarded for turning his attention to you. For a higher chance of success use this trick before mealtime and have a large amount of high-value treats like steak or chicken with you. When another dog comes by, say “Cookie dog!” and place a treat in front of his nose. Keep feeding him with treats until the dog has passed by then stop the next dog shows up – make sure you also praise him for complying. Eventually, he’ll catch on that the arrival of another dog means he’s likely to get some treats from you and will adjust his behavior accordingly. Eventually, you can incorporate other commands like “Sit” and “Stay” as he adjusts his behavior.

Dietary supplementation with tryptophan and DHA can also be beneficial for your dog’s behavior. According to Dr. Karen Becker a wellness veterinarian tryptophan can increase the amount of serotonin in the brain and has been shown to reduce aggression in some animals as well as helping them recover from stress. Giving your canine friend a diet rich in omega-3 essential fatty acids which including DHA, can improve your dog’s behavior among the many other health benefits that come with it.

Head halters such as the Gentle Leader resemble the reins used on horses and help control the direction of your dog’s head and muzzle. They can prevent the dog from approaching a potential problem situation, by reorienting its head and closing its mouth whenever the dog displays aggression. They are a far more humane option than choke collars, pinch collars, or leash “pops” which make quick jerks to the collar.

Tip #6. Spay or Neuter Your Animal

You will often find that intact dogs – those that have not been spayed or neutered – tend more territorial, aggressive and protective. Neutering reduces a dog’s drive to roam, and seek out members of the opposite sex for mating. Plus it’s also good for the general health of your dog.

Unfortunately, there’s no guarantee that an aggressive dog can be completely cured of this behavior. In many cases, the only answer is to manage the problem by limiting the dog’s exposure to provocative people, things or situations that spark his aggression. Meanwhile, as a pet parent, you should know that owning such a dog carries risks and you must take precautions to ensure that no one’s injured. Differences Between The Most Popular Brindle Dog Breeds

Differences Between The Most Popular Brindle Dog Breeds