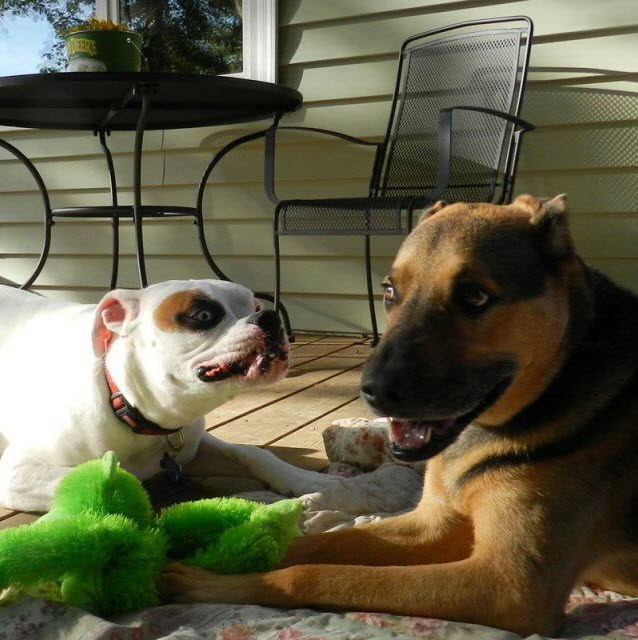 “The other day I was playing fetch in the park with my dog Bosco. Another dog got interested in our game and tried to retrieve our chew toy – that’s when Bosco attacked.” 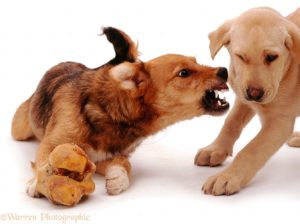 Hundreds of dog owners can relate to this experience where their canine pet becomes overly aggressive as soon as another dog or human being shows interest in their food or toys. This is termed as resource guarding, a behavior which can be quite annoying to a pet owner, especially when the aggressive behavior is directed at them.

Victoria Sitwell, a world-renowned dog specialist, says “Guarding resources is usually a manifestation of the dog’s deep-rooted insecurity and inability to cope well in a social situation”, and further attributes this behavior to the dog’s natural instinct to survive.

What Type of Resources?

A dog that practices resource guarding will usually try and control access to food, items or territory he considers important to him by using aggressive body language to keep his “competitors” at bay. And while some dogs only show this behavior towards certain animals or people, others guard their resources from everyone else.

Resource guarding can take different forms ranging from relatively harmless aggression, like growling at someone coming towards them, to full-scale hostility like biting someone or chasing after them.

In certain cases, dogs guard food dropped on the floor or leftovers they find on the table, behavior which can pose a threat to household members when the dog is overly aggressive. The situation can become especially risky if there are children in the home, because they may not recognize the warning signs given by the dog.

Why You Shouldn’t React With Anger To Guarding

While some people have learned to live with dogs that have resource guarding issues, others get angry and combative with their pets mainly because they don’t understand the reasons for this kind of behavior.

Confronting your dog, however, is not the solution and may, in fact, make a bad situation worse by driving your dog to guard the resource even more. The last thing you should do is use physical punishment as a deterrent because it achieves the opposite goal and actually reinforces guarding behavior. At the very worst, it damages the relationship with your dog.

Instead, as a pet parent, you should try and understand where your dog is coming from and work at instilling more confidence in him instead of making him feel threatened.

How To Approach Resource Guarding Behavior 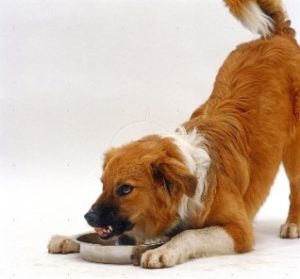 Sometimes guarding behavior is the result of how we raise our puppies. Take the example of a dog shelter where many people get their pets from; you will find that members of the same litter are often fed from one pan, which forces them to compete for food from an early age.

They quickly learn that aggressive behavior pays, because puppies who dominate others eat more and grow bigger and stronger, helping them to continue monopolizing resources. Once the guarding habit is ingrained in them it can become almost impossible to eradicate.

Once you understand the reason behind your dog’s guarding behavior you can start taking the necessary steps to reverse it.

Animal Behaviorist Dr. Sophia Yin believes “It’s all about finding a way to help the dog feel like no one’s going to steal his stuff.”

She recommends that you try figuring out

Use Hand Feeding To Discourage Food Guarding (For Puppies) 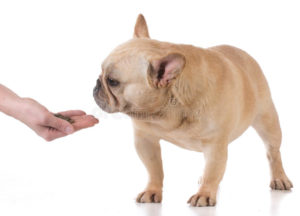 It’s always best to discourage your new puppy from food guarding the minute you bring him home. Start by hand feeding him for the first few meals, and show him affection as you do this. For example, you can feed him with one hand as you stroke him with the other.

It’s also a good idea to first feed him from your lap before transferring his bowl to the floor. As he feeds, reach down occasionally to add treats to his bowl – this is important for building trust between the two of you.

Use Caution With Grown Dogs

When approaching your dog during meal time read his body language to gauge his mood. Usually, if you’ve studied what he looks like when his relaxed you’ll be able to tell the difference when he’s wound up.

It’s also a good idea to keep him tethered to something stable as you start training him against food guarding, that way you’ll remain out of range if he becomes aggressive.

If you don’t feel safe around your dog during meal time, it’s better to get a professional dog handler to help you deal with resource guarding. 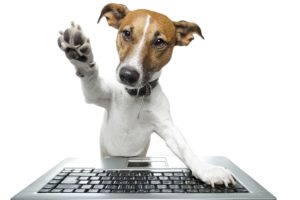 In the example of feeding a puppy, we add delicious treats as he feeds for a reason, we want the dog to believe that when someone approaches his bowl, it’s a good thing for him. This is classic counterconditioning – getting him to associate a stranger’s approach with good things.

Always read his body language for signs of aggression and understand your limits. A step by step approach is recommended so that you know when you’re ready to go to the next level of training.

In this exercise you will have two meals: kibble in a bowl and high value treats like hotdogs or chicken which you cut up into small bits.

Step 1- Teach Him How To Say “Please”

The first behavior you need to train your dog is to say please by sitting, if he wants to get his food. Use a high reinforcement rate to teach him this behavior – say 100 rewards over one or two days, before you start training him on the food guarding issue. Once his natural behavior is to sit and wait for his food the minute he sees you holding a bowl, then you’re good to go on the training.

Step 2 – Give Him Treats, But From A Distance

Step 3 – Take Your First Step Towards Him

Step 4 – Stand By Your Dog And Drop Him A Treat

Step 5 – Feed Him From Your Hand

Step 6 – Feed Him From Your Other Hand

Step 8 – Teach The Other Family Members

Sometimes it may not be possible to get rid of guarding behavior completely, so you may be forced to try the next best thing – manage his behavior.

Ensure that whenever you have visitors over you remove all food items in the room where your guests are. Alternatively, you can confine your dog in a different area from your visitors until they leave. How To Stop Your Dog From Biting & Nipping