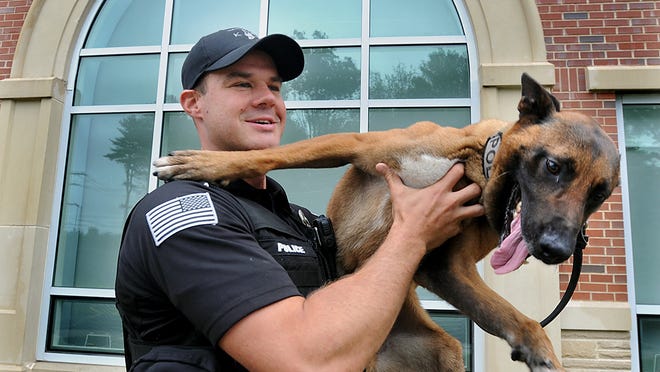 HUDSON — Jocko is on patrol in Hudson. But the Police Department’s new dog is not the dog that was expected.

“Dogs have to go through rigorous training and meet certain criteria to do police work on the street,” Leandres explained. “He (the first Jocko) was great in many aspects — a great dog — but he fell short in a couple of areas. It was deemed he wouldn’t make the best fit for police work.”

The original Jocko, who was paid for with a grant from the Stanton Foundation of New York and Cambridge, was returned to its breeder. Leandres said the dog would likely be trained to be a competition dog.

Luckily, at no additional charge for the department, there was a Belgian Malinois available that has had some training with another handler and had actually done some work on the streets. The pair were certified together by the North American Working Dog Association.

Who to hire?:Aimed at preventing nepotism and discrimination, an 1880s program is smothering today’s police

Police and fire scanner::Listen to scanner for the MetroWest region

Although they have only been on duty a week, they’ve already been called to action.

On Sunday, police received a call about an alleged domestic assault where the suspect had run away.

“We got a report from a witness that someone matching a description jumped over a fence into a very thickly wooded area,” said Leandres. “The dog started to enter the area and we alerted the suspect about the presence of the dog. He gave himself up peacefully.”

Leandres said that is an aspect of having a police dog that will often prove to be valuable. Suspects frequently give up, rather than challenge a trained police dog.

“They know they’re going to be found one way or another,” Leandres said.

Who is Jocko, Hudson’s Police K9, named for?

Jocko is named for Officer John “Jocko” Moore, the only Hudson police officer who died in the line of duty, on June 18, 1955. That’s why the department kept the name, even as the dogs changed.

Leandres said he is happy with being partnered with the new Jocko, although he admits he misses the original one.

“I wish I could have kept him,” he said of the German shepherd. “We spent every day together for three months. He was a good dog.”