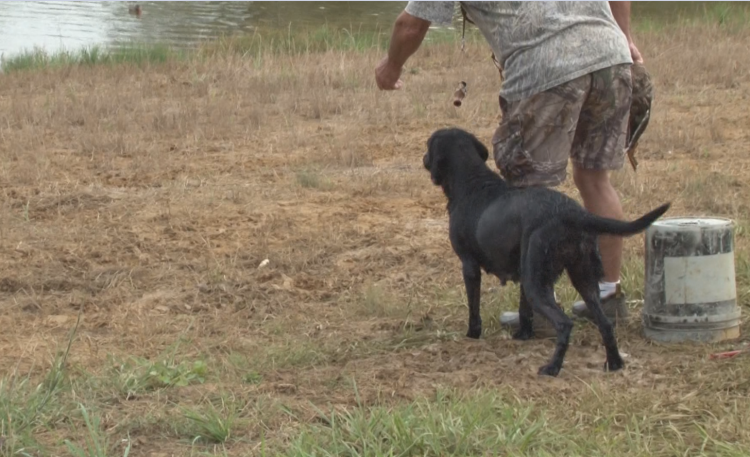 Brett Copeland is a dog trainer in Jonesboro, Arkansas. He trained his clients’ dogs to hunt for ducks and doves.

“Throughout the year, people may not have time at home to keep up with the dog. Everybody’s busy, young kids, working all the time, traveling, so they leave their dog in training. So, almost to see what their training is getting, we accumulate titles throughout the year,” Copeland said.

Sunday morning, folks across the south practiced skills that will gain titles.

Tyler Patterson is the owner of Maple Ridge Retrievers. He said training makes the hunt easier.

“It’s part of the partnership of them going and doing it. But then, you kill a bird and it goes down and you can’t find it, the dog should be able to find it even if it’s in the cover or you don’t want to wade out into the water and get back in the boat in a duck hunting situation to go get it,” Patterson said.

But, it’s more than hunting, it’s companionship. And it’s important to keep that companion safe.

“Especially if you’re hunting out of a pit you’re eye level with them you know, your gun barrel is right there at their head. You’re sitting on a dove stool, your muzzle is basically the same level as them. So they need to sit still and just a touch, what we call a negative position, just a touch behind you,” Patterson said.

“In the safety aspect of the dog, we do what the dog steady. we don’t want him in harm’s way when guns are blazing. Whether it’s tying the dog up to make sure he’s steady or things like that,” Copeland said.

Even though dove season is just around the corner, professional dog trainers said it takes a year of training to get your dog to a finished level.

“If you’ve got a dog that’s had some training maybe it’s hunted a little bit, what I would do to prep for coming up dove season, it’s September the 4th your dog needs to be in physical shape. You know, if he’s been sitting on the couch and enjoying the summer, going to the lake house, that type deal and now you say ‘let’s go retrieve 15 doves’ like we hope we kill, he needs to be in shape to endure the heat. And if he gets hot, you got to put him up. You maybe can’t hunt him the whole portion of the hunt,” Patterson said.

Maple Ridge Retrievers will be hosting another hunt test this coming August.