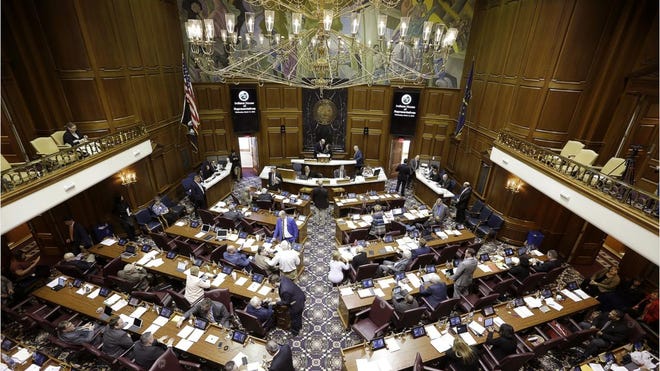 Facing a pandemic unlike any his predecessors have seen, Gov. Eric Holcomb Wednesday announced the formation of a public health commission that will spend the next year finding ways to improve the overall health of Indiana residents.

While COVID response will figure into the work of the 15-person commission, Holcomb said that the panel’s scope would go far beyond this latest crisis.

“We’ve got our game plan right now to continue to work through the pandemic,” he said. “That’s not what this commission or this task force is about. This is a long-term look at where we want our state to be decades from now.”

Holcomb tapped longtime Republican politician Luke Kenley and former state health commissioner Dr. Judy Monroe to co-chair the body. The group will convene for the first time next month and is expected to issue a report by next summer, in time for 2023 budget discussions, Holcomb said.

In a sign of just how contentious the debate has become, the Republican-controlled Indiana General Assembly passed a bill this year, saying it could call itself into session during a state of emergency without gubernatorial approval. Holcomb, also a Republican, is suing on behalf of the state’s top office.

But public health has been a contentious area long before COVID. For decades, the Indiana population has rarely received plaudits for its health profile. The state’s obesity, smoking, addiction, and infant and maternal mortality rates often appeared in top 10 lists, not a place any state wants to be.

Indiana also routinely falls in the bottom rung of states when it comes to public health funding and preparedness to handle a public health emergency, such as a pandemic, according to the Trust for America’s Health.

Clinical health care affects only about 10% of overall health, said Indiana State Health Commissioner Dr. Kris Box. The environment contributes to about 20% and behaviors to about 50%.

“The best way to improve Hoosiers’ health … is to focus on those behaviors and those circumstances that can prevent medical issues before they require medical care,” Box said. “That is the heart of public health.”

The commission will also explore the state’s public health infrastructure, which includes 94 local health departments — one for each of the 92 counties plus the Gary and Fishers city departments.

Health officials are responsible for a range of jobs, from cleaning up methamphetamine labs to inspecting restaurants to responding to an all-hands-on-deck pandemic over the past 18 months, Box said.

One thing the commission could consider is whether counties might join together to have one person tasked with doing lead issues and another with food safety, Box said.

This system has been in place for about 140 years and there’s little standardization to how the different departments operate, state officials said, adding that the goal will be to expose the system’s strengths and weaknesses.

“The pandemic has just further obviously highlighted the need to make sure we’re doing everything not just efficiently but that is leading to a good result,” Holcomb said. “We have dealt with so many stresses and strains to the system that we believe that this is the absolute right time to be leaning into this space.”

Commission co-chair Kenley said he agreed the time was ripe for a panel such as the one that he will be leading. During his two plus decades in the state senate he was known for the hand he had in helping shape Indiana’s spending priorities. His co-chair Monroe served as Indiana’s top doctor under Gov. Mitch Daniels and left for a job at the Centers for Disease Control and Prevention in Atlanta.

Holcomb compared the newer commission to the teacher pay commission, which helped broker a compromise on a raise for teachers at the close of the last session.

Legislators also are interested in solving these issues, Holcomb said, and he’s hoping that the findings of the commission, which will solicit participation from around the state, will be persuasive.

“This is not just about us or the legislature,” Holcomb said. “This is about addressing a system, which can at times sound boring or mundane or not a priority…. Hopefully the work that goes into this first and foremost leads to better health.”