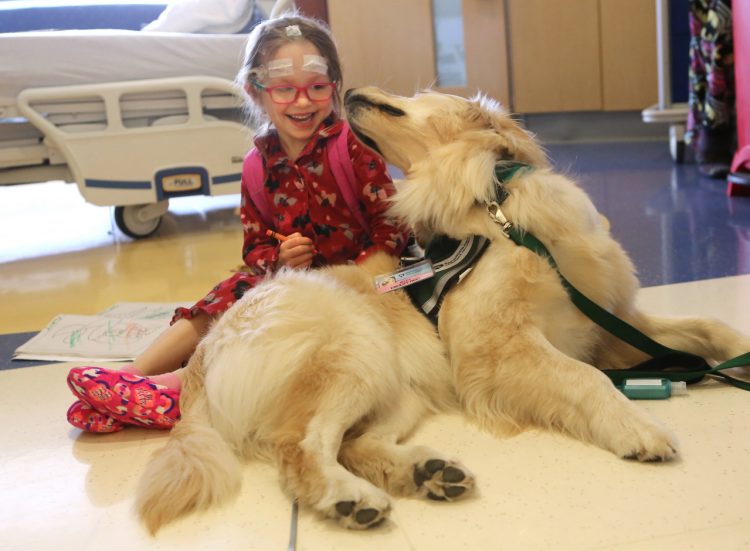 HERSHEY, Pa. (WTAJ) – Some folks have trouble just potty-training their dogs, so imagine training them to work at a hospital. Well these three loving retrievers are proof that it’s possible!

“She comes to work with me every day, so she works 40 hours a week Monday through Friday,” said Becky’s primary handler, and dog mom Erin Shaffer.

All three retrievers are MD’s or “Medical Dog-tors” for the Child Life team.

But don’t worry, they earned their degrees as they were specifically trained to help kids meet their goals during their stays and visits at the hospital.

“I joke with our Child Life team that I’m going to have more dogs on my staff than people,” laughed Kane.

Kaia was the first hire back in 2016, making Penn State Children’s Hospital the first children’s hospital in Pennsylvania to establish a facility dog program.

“I always call Kaia our ‘Ambassa-dog’ because she literally paved the way for the rest,” said Kane.

You’ll find her on the ground floor, lending a paw to patients in pediatric radiology and radiation oncology.

“She’s helped so many families but one that has always stayed in my mind was a 4-year-old boy who was so afraid of a CT scan,” said Kane.

Afraid… until someone paged Kaia.

“Kaia jumped on the CT scanner and she laid down and the little boy kind of got curious and he realized okay Kaia’s laying there really still, it’s not hurting her… she seems comfortable,” said Kane.

Warming up, the little boy climbed up onto the scanner to check it out for himself.

“And then Kaia moved to the back of the machine and gave him a high five,” said Kane.

Letting the little boy know, that he was in the exact position the doctor’s needed him to be.

“More than mom and dad, more than Child Life, kids really do trust our dogs and that’s really the reason why we have them here,” said Kane.

Going up to the third floor is Kaia’s coworker Becky. You’ll find her along side of her primary handler Erin Shaffer, supporting families who might have just learned about a scary diagnosis.

“Working in the hematology, oncology area we see a lot of new cancer diagnosis so Becky is a great support for those families,” said Shaffer.

But that’s not all Becky specializes in.

“Becky will show a child how to take Gatorade or apple sauce from a syringe and then a child feels more comfortable taking their medication through that syringe,” said Kane.

Last but not least, there’s Pilot, the newest member of the hospital pack.

Being the dog on the block, Gloudemans says he naturally started off a little shy, but has since been working his tail off.

“We’ll see patients post opt. So after their surgeries if they are maybe hesitant to start walking again or if they’re in pain, he’s a good motivator and it doesn’t feel like work. I’ve heard patients say they don’t want to go to physical therapy because it’s work, but if I have them moving to brush him or if we pretend to brush his teeth, or being able to hold the leash and walk the dog themselves versus their mom making them walk down the hallway it’s not work to them, it’s fun,” said Gloudemans.

Fetching smiles as soon as they walk through those hospital doors.

But as soon as it’s clock out time?

“Becky is a normal dog at home. Her favorite things are stuffed animals, she loves to play ball,” said Shaffer.

Gloudemans says that Pilot is completely the same.

“Sometimes patients don’t believe me when I tell them he is running, he gets the zoomies just like any other dog. Immediately when we get home he brings me a toy and I’m like not even through the doorway yet,” laughed Gloudemans.

“Which is good,” said Kane. “They need to decompress, our dogs pick up on a lot of emotions here at the hospital, so we like them to decompress and just be dogs at home.”

Sign up for the WTAJ Newsletter for the latest local news, weather and community events that matter to you.

Dr Magdoline Awad: reasons for dog panting heavily at night and having lumps

Dr Magdoline Awad: reasons for dog panting heavily at night and having lumps