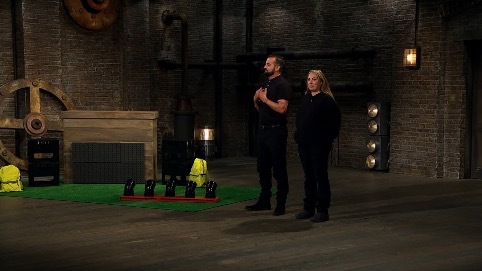 A couple who run a dog training company in Chorleywood will appear in tonight’s Dragons’ Den episode.

Jamie and Gemma Pound took their new business UK Sniffer Dogs to the dragons to see if their idea of hosting sniffer dog classes and trials, to help dogs with a range of mental and physical benefits, is an idea worth investing in.

The couple first met at a dog training course in 2013 and quickly began formulating ideas to launch their local business Jamie Pound Dog Training in Chorleywood and Berkhamsted.

Just three years earlier Mr Pound suffered severe injuries while working as an electrician, and an electrical explosion set his t-shirt on fire, which caused him to have 40 per cent burns from his neck to torso.

The accident meant he was in a coma for a while and he lost his sight temporarily – and it was after purchasing a German Shepherd puppy, Frankie, who helped him recover.

His wife said: “He needed a reason to get up in the morning, he wasn’t able to work, he was a young lad and all his friends were out, at work or had girlfriends, and he was just sat at home recovering.

“He needed companionship and he needed a purpose, so he got himself a dog. The dog was quite a problematic dog and he struggled to find any training classes. So he just thought I’m going to become a dog trainer, not necessary for it to become his job, but just to help his own dog.”

Meanwhile, Mrs Pound met her husband at the dog training course after she studied to become a veterinary nurse and then started her own dog walking business.

The two met on Mr Pound’s first training course, and they quickly fell in love and moved in together.

The dog walking business had to stop after the Jamie Pound Dog Training business, which started in 2014, became busier and a full-time job.

It started off with training three dogs a week at Chorleywood Common, and now the two train nearly 250 dogs a week.

Now on top of that they have instructors across the UK to help out with the UK Sniffer Dogs aspect of their business which launched in 2018.

It was found that there were several benefits in scent detection, such as calming dogs, training dogs mentally and physically, socialising dogs, helping older dogs who are not mobile, helping to tire out puppies and more.

After realising there were not many options out there to train common household dogs with scent detection, the two launched the UK Sniffer Dogs business and it became one of their most popular classes.

The aim is to make scent detection accessible to pet dog owners because of its range of benefits.

To see if their pitch was successful or not, tune in for Dragons’ Den today (May 20) at 8pm on BBC One.