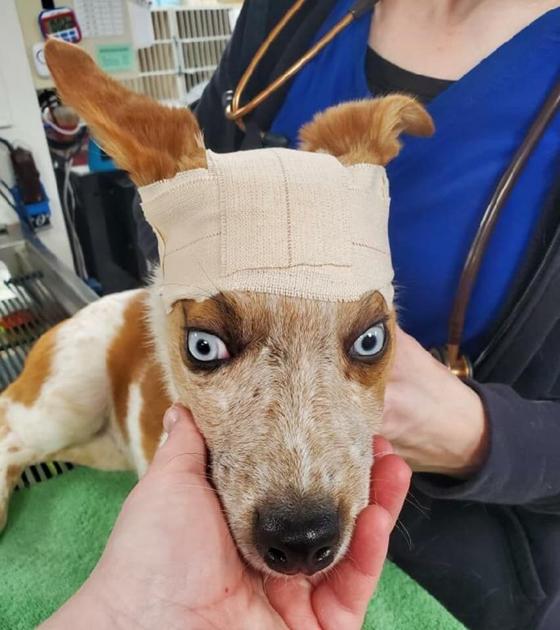 A Macomb County judge indicated he would sentence a woman who abused a puppy to “some jail time” after reading a “rather disturbing” report about the incident. But he ultimately may not be the sentencing judge.

The sentencing of Amber Sunde, 26, was postponed Wednesday to June at the request of her attorney, Bill Barnwell, to give him more time to seek Mental Health Court for his client. If she is approved for Mental Health Court, her case will be transferred to Judge Carl Marlinga.

“I think in my personal experience … that the appropriate place for somebody with her mental health issues is in Mental Health Court,” Barnwell told The Macomb Daily following the hearing in Macomb County Circuit Court.

Sunde is currently taking medication for her issues, Barnwell said, but declined to elaborate.

She is accused of abusing 6-month-old dog “Lux” by throwing it into the Clinton River in Utica several times Jan. 4. Lux suffered numerous injuries including a broken leg and fractured skull, according to the Detroit Pit Crew rescue organization. Pit Crew personnel said Lux endured other injuries, including a broken front leg that never healed properly. Lux has been recuperating in a foster home.

Pit Crew has publicly criticized Macomb Prosecutor Peter Lucido for agreeing with the plea deal that would allow Sunde to enter the specialty court. If she completes the mental-health-treatment program, which can last two years and includes therapy, medication and regular sessions with the judge, the charge could be reduced to a misdemeanor animal abuse charge.

Sunde on April 1 pleaded guilty to third-degree animal killing and/or torture, punishable by up to four years in prison.

If Sunde is rejected for Mental Health Court, Biernat said he likely would sentence her within the guideline range, which probation officials say is zero to six months in jail while Barnwell contends the range is slightly lower, zero to three months. The judge would make a final determination of the range.

Her guidelines are relatively low because she has no prior criminal record, Barnwell said. He told the judge she has a college degree and is employed.

Biernat said if he decides to sentence her above the guideline range, Sunde would have the option of withdrawing her plea and demanding a trial, although Barnwell said it is unlikely she would do that.

Biernat did not elaborate on details in the presentence report but ordered Sunde not have contact with anyone under age 17 or with any animals. She previously had other animals in her residence.

Barnwell noted during the hearing Sunde has been threatened and “is in fear for her safety.”

“While I understand the public passion behind this case, there have been numerous threats of violence against my client as well as others attempting to locate and post her personal information,” he said after the hearing. “These threats against Miss Sunde or any others involved in this case arguably cross a legal line themselves. This process needs to lawfully play out in orderly fashion.”

He added people blaming the judge or attorneys involved in the case are misdirecting their criticism. If they want harsher penalties for animal abuse, they should lobby their lawmakers, he said.

The case was rescheduled for June 23.

HONOLULU — Colt Brennan, a star quarterback at the University of Hawaii who finished third in the 2007 Heisman Trophy balloting, died early Tuesday, his father said. He was 37.

Numerous police officials will discuss the proposed changes to qualified immunity as part of possible police reforms at 1:30 p.m. Wednesday, May 12.

This Is the Most Aggressive Dog Breed, New Study Says

Make Nutrition a Priority for Your Pet

Make Nutrition a Priority for Your Pet