Jump? No, Slump. Puppy Refuses To Get Up During Training In Hilarious Video 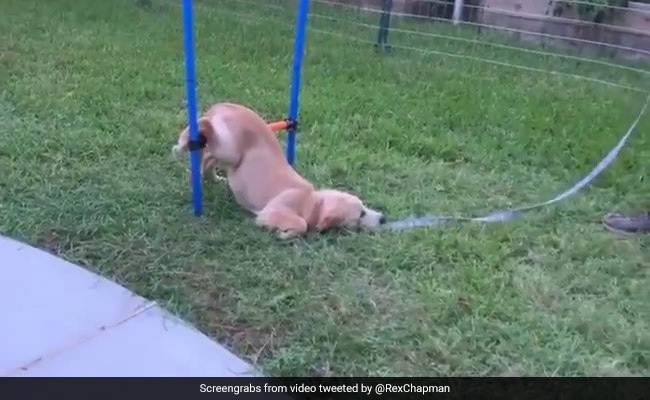 A puppy slumps over during obstacle course training in a hilarious video going viral.

You know what it feels like to work when you would prefer to laze. After doing the barest minimum, you feel like slumping on a couch. Seems like this puppy felt the same during its training session. It absolutely embraced snooze time though, sadly, it lasted only a few seconds. The funny video was shared on Twitter by former professional American basketball player Rex Chapman. We are falling head over heels for this adorable puppy who took its failure at the obstacle course with a devil-may-care attitude but with dollops of cuteness. The footage shows a trainer taking the dog by its leash through some weave poles.  The furry creature undertakes it quite well.

But when the jump bar test comes up, we are awed at what we see. As soon as the dog reaches the bar, it makes no effort to jump over it but simply dashes into it. It falls like a molten heap on the other side but, luckily, it doesn’t seem hurt. Instead, all it cares for is a bit of slump time and it lies contentedly on the grass for a few seconds. Meanwhile, the people around it laugh, enamoured by its cuteness. However, it soon had to wriggle itself to be back on its legs.

The tweet said, “Some doggos aren’t built for the obstacle course. Wait for it.”

Some doggos aren’t built for the obstacle course. Wait for it… pic.twitter.com/M50Y3jOBFc

Twitter is raving over this video. What’s more, a person replied to the tweet with another funny video from a dog competition.

One user applauded the dog’s performance and gave it “11 out of 10 points” for completing the course in style.

I fail to see the problem here. I give him 11 out of 10 points, 10 for completing the course plus one for style

The video is a great trigger to get you a hearty laugh on any day. Users have confessed to laughing out loud after watching the furball’s attitude. On that note, a user took a humorous dig at it and said that the video should come with a trigger warning to stop you from watching it during a conference meeting.

I rarely laugh out loud – sometimes a chuckle sneeks out – but this got a full-throated guffaw. I repeatedly watched it & I’m still laughing. This is what the interwebs are for.

Some users have vibed with the very essence of the video: laziness.

I’m not even going to try. pic.twitter.com/TtBXD32DP4

What do you think of the video? Let us know using the comments section.

Dogs available for adoption in Evansville

Dogs available for adoption in Evansville