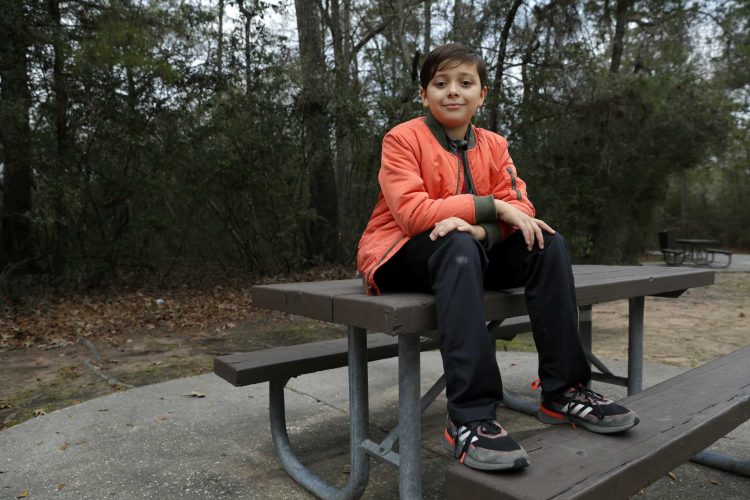 Brushing his hair off his forehead, David “Beto” Tidwell explained what it’s like to be a person who stutters.

“It’s not … it’s just something about us. Like some people are in a wheelchair, some people have cancer,” he said. “Stuttering is just normal; it’s not bad at all.”

The fact that Beto stutters is far from the most interesting thing about him. The fifth grader plays clarinet and is in the gifted and talented program at Mitchell Intermediate School in The Woodlands. He wants to be a neurosurgeon when he grows up because the brain is the headquarters for the body, he said.

Beto speaks both Spanish and English, and he can stutter in either language. In English, he has repetition, which he explained as repeating a sound, word, phrase or sentence. In Spanish, he has a block, which he said happens when the air from his lungs does not come out of his mouth.

Truthfully, it hasn’t affected his life much, he said. Though he remembers one instance when other children picked on him. “I stuttered, then they were like ‘wuh, wuh, wuh’ — they were purposely stuttering to make me feel bad,” he said.

President-elect Joe Biden has talked openly about being a person who stutters. In a 2019 tweet to a political opponent, Biden said he has worked his whole life to overcome a stutter, and he considered it a great honor to mentor kids who have experienced the same.

Earlier that year, Biden stuttered during a presidential primary debate, which drew criticism. In an article in The Atlantic, Biden said he had trouble pronouncing his “S’s.” Traditional speech therapy did not work for him in elementary school, so he worked on it alone in his bedroom by reciting poetry.

“It’s really cool knowing that the leader of the country can relate to me and the whole of stuttering people,” Beto said. “He’s mentioned it in a couple of his speeches, and it makes me feel unique, y’know?”

Stuttering happens three different ways: repetition of sounds (cuh-cuh-cuh-cat); prolongation of sounds or words (puhhhhhhh-uppy); or a block, in which a person has a difficult time speaking because the air from their lungs is not escaping their mouth, said Fergie Cantos, a bilingual speech language pathologist with the Stuttering Association for the Young (SAY).

“Blocks are more severe; there are a lot of head nods, tension in their throat and you may see their head go back, their eyes close or blinking or tapping,” Cantos said.

Byrd founded the University of Texas’ Michael and Tami Lang Stuttering Institute, which promotes speaking confidently, communicating effectively and advocating meaningfully. Speech therapists work with people to increase their communication confidence, build resiliency and learn how to talk about their stuttering in ways that will help remove stereotypes.

During the pandemic, Beto attended a three-week course at the Lang Stuttering Institute, where he worked with several speech therapists and teachers over Zoom. Afterward, he participated in the institute’s Pay It Forward, a mentorship program for people of all ages who help each other achieve their communication goals.

While he’s read that some stutterers have difficulty with virtual classes or that it makes them stutter more, he has no trouble learning or doing schoolwork from home, saying he’s more comfortable in that environment.

Stutter reduction is not the institute’s goal, Byrd said. The organization works toward helping people effectively and confidently communicate with others, using tactics like fluency shaping, which encourages speakers to continue to stutter through a word or phrase until they hit a fluent spot. If a child is showing signs of a stutter, the best age to bring them to a speech therapist would be 2 or 3, when the child’s brain is most adept at picking up languages, she said.

Byrd will meet Biden at the White House later this year to discuss the new Arthur M. Blank Center for Stuttering Education and Research. It was established through a $20 million legacy grant to further Byrd’s work, which includes the institute, developmental stuttering laboratory and a stuttering clinic.

Biden has been open about the fact that he stutters but has admitted to changing words or memorizing what he will say before debates in hopes that he won’t stutter, Byrd said. People can mischaracterize a stuttering moment as lower intelligence or anxiety because they do not know what stuttering moments actually look like, she added.

“I plan to talk to him about it because there is a part of his messaging that isn’t reflective of what we teach people,” Byrd said. “I would advise him against changing his words or memorizing and instead talk through the stuttering moment.”

More than one language is a gift

Cantos, a bilingual speech language pathologist, said family members of children who stutter in multiple languages may not be aware of what is happening.

Cantos works for SAY, an organization based in New York City that aims to build community and acceptance for children who stutter while helping them develop communication skills. Astros outfielder George Springer became a SAY spokesperson after speaking openly about his stutter.

“Sometimes (parents) think that speaking two languages may hurt (the child) and it’s making them stutter, but it’s not true,” Cantos said. “Taking away a language will not help (a child who stutters).”

In a paper assessing bilingual children who stutter, Byrd found no evidence of bilingualism contributing to stuttering or more difficulty with a stutter.

Renew Houston: Get the latest wellness news delivered to your inbox

Learning more than one language is a gift, Byrd said, and for many, it’s not a choice. Choosing to not teach a child who stutters his or her native language could result in a cultural disconnect if they are the only ones who do not speak it.

“Many parents come to me and say ‘I’m concerned about my child because we speak another language in the home, and we’re thinking of only speaking English to them because I don’t want to make the stuttering worse,’” Byrd said. “Speaking more than one language will not cause a child to stutter more.”

Since he speaks only English at school, Beto said his mom prefers he speak mostly Spanish at home. He rarely speaks both languages simultaneously, but not because he is a boy who stutters.