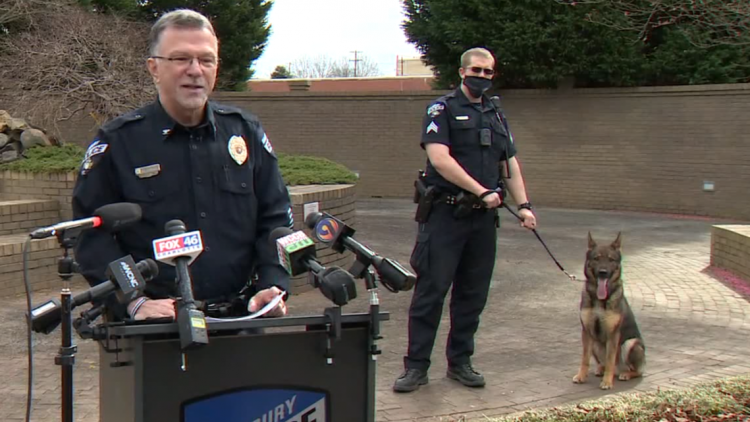 Local PETA members will join other Salisbury residents for a virtual Salisbury City Council meeting on Tuesday to “demand answers from elected officials.”

SALISBURY, N.C. — More than 75,000 people have signed a petition to have the badge taken away from a K9 police officer who was involved in a training incident with a canine.

The petition states that: “there is absolutely no context needed for anyone to clearly see the abuse this dog is being forced to take at the hands of the K9’s partner.”

The internal investigation is reviewing actions taken by one of their officers against the animal, according to Salisbury Police Chief Jerry Stokes. He did not comment on what the investigation entails but confirmed the incident was captured on video.


Stokes cited the incident as an “on-going personnel matter,” but did confirm the officer in question has been separated from the K9 while they conduct their review.

The K9 unit, named Zuul, was not harmed, according to Stokes. The name of the officer was not publicly released.

Stokes said an outside agency has been charged with leading the inquiry. Stokes confirmed that the agency is interviewing and reviewing the matter.

The petition goes on to read:

“It is very clear by the conversation heard in the background that there are other members of the police department who are in on the abuse. This is not an isolated incident given how nonchalant the bystanders are and how fast the officer was to abuse Zuul.”

Local PETA members will join other Salisbury residents for a virtual Salisbury City Council meeting on Tuesday to “demand answers from elected officials.”

According to a news release, the group will also call for the officer to be prosecuted for cruelty to animals.

FDA Recalls Performance Dog Food for Salmonella; The Real Problem Is That There’s Still Horse Meat in It