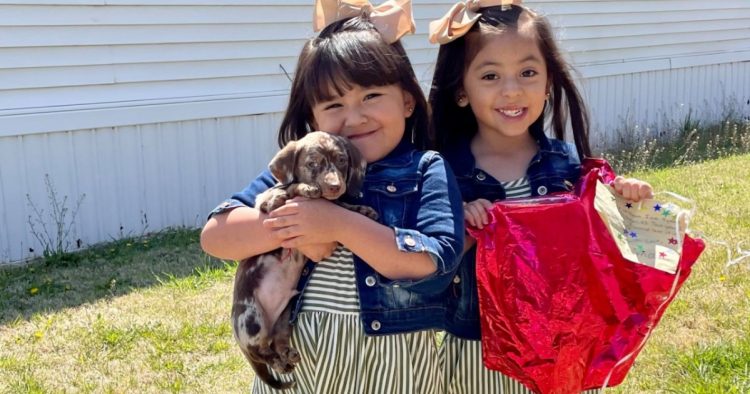 LIBERAL, Kan. — A little girl and her twin sister were surprised with a new puppy after a kind stranger found the girl’s wish list to Santa attached to a balloon nearly 650 miles away.

Leticia Flores-Gonzalez says her 4-year-old daughters, Luna and Gianella, both released balloons attached to Christmas lists from their home in Liberal, Kansas, in December. The mother says she wanted to create a special memory during the tough year of 2020.

Leticia says she didn’t expect the balloons to go far, but Luna’s somehow traveled all the way to the Shreveport, Louisiana area, where it was found by Alvin Bamburg.

The man told “Good Morning America” that he found the balloon while hunting and read the list, which included candy, a Spiderman ball, a “Frozen” doll, a My Little Pony, and of course – a puppy.

Bamburg posted about his find on Facebook and through the power of social media, he was able to connect with the family.

To the girls’ delight, Bamburgh was able to ship almost every item on the list to the family, but one item had to be specially delivered. He and his wife drove to the family’s home and surprised the girls with a puppy named Max.

“It’s not about the amount or value of gifts that were sent to my girl’s that is the most important, it’s the love they were sent with that holds the value,” the girls’ mother told The E.W. Scripps Company.

Leticia says Bamburg’s act of kindness meant a lot to her family and reminded her that good people still exist.

“It meant the world to me to see those little happy faces on Luna and Gianella when they received gifts they asked Santa for,” she said. “One thing that comes out of it is that it gives us the lesson that marvelous and wonderful people still exist whom will give the best of them to strangers.”