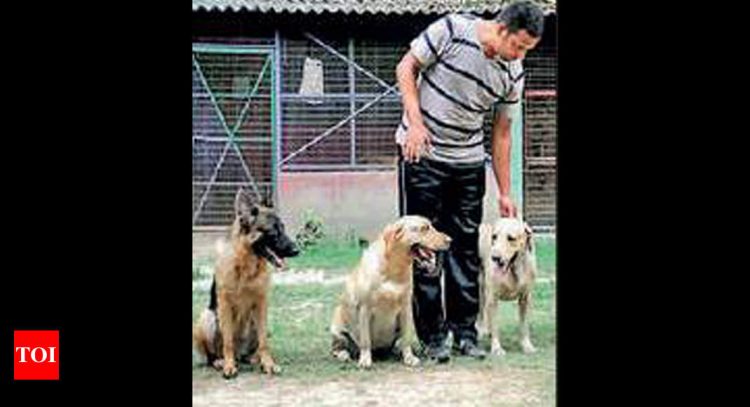 KOLKATA: With the second wave of Covid hitting the city and Kolkata Police losing five personnel in this period, even the dog squad has been forced to make changes to their daily routine. This is the squad’s golden jubilee year, but Kolkata Police has suspended outdoor training for the 40-odd police sniffer dogs fearing that the limited number of handlers can get infected with Covid if they come in contact with too many citizens.
“The dogs need to be taken out and trained across the city to make them aware of actual working conditions. They also need training on roads to strengthen their feet. Those in the explosives and drugs detection units need to get ground training under actual conditions. Usually, a part of this training is done at the Maidan and Rabindra Sarobar. But, as of now, we have stopped this activity. The training is taking place within the confines of the Police Training School. The dogs are going through their usual duties, though. We are carrying special ice packs for the dogs on outdoor assignments,” said a police source.
A senior officer overseeing the training said the aim was also to use the swimming pool. “We are looking at multi-purpose exercises since we cannot take them out of PTS. Not only will swimming be relaxing, it will also fight high humidity and will be good exercise. Some of the dogs, like Labradors, love to swim and hence enjoy the new drill,” he said.
The Covid situation has also meant that their trainers have to be vigilant about themselves not contracting the disease. “We had initially planned more adjustments when wide-scale Covid cases were reported last year from PTS. But now that the situation is under control, we have to bring in some measures so that we can keep the squad fit,” said an officer at Lalbazar.
The city police’s dog squad, which is attached to the detective department, has different breeds, including Labrador, Dobermann, German Shepherd and Golden Retriever and each dog specializes in one of five policing categories — narcotics tracking, explosives tracking, crime tracking, search and rescue, and guard and assault.

Protect Your Pets Health with Some Simple Reminders