Labrodoodle is heading to Pontypool for guide dog training 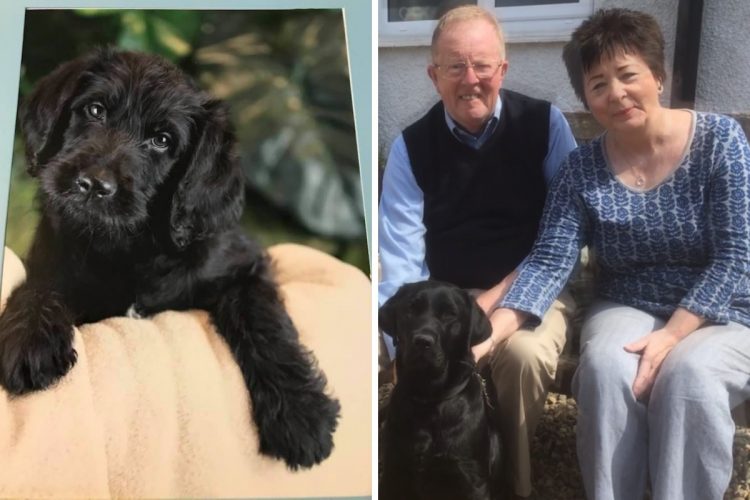 LABRODOODLE puppy, Davey, has arrived in Gwent to prepare for life as a guide dog.

Davey – named in memory of Dave Rees, a supporter of Guide Dogs Cymru – will spend his first year with a puppy raiser in Pontypool, learning many of the skills he will need for the working life ahead.

Mr Rees’ widow, Linda, raised £5,000 to name the labradoodle as a tribute to her late husband, who spent ten years as a volunteer puppy raiser for Guide Dogs Cymru.

A retired ambulance officer, he helped to turn a series of lively puppies into calm, confident dogs, taking them on public transport and teaching them how to behave in shops and cafes.

He also took the pups into schools, helping pupils to understand how guide dogs help people with sight loss.

Mrs Rees said: “We raised six guide dog pups, and they were all beautiful dogs. Dave loved them all, and it was hard giving them up after a year, but he enjoyed giving talks for the charity and meeting people, and it was nice when the guide dog owners kept in touch.

“Dave always wanted to raise a labradoodle pup as a guide dog, and he would have been so proud of this one.

“He was diabetic and, due to the effect on his health, always feared he would lose his sight, so training these puppies held extra significance for him.

“His death on Christmas Day 2019 was a big shock and I miss him dreadfully, but I was determined to do something positive for him.

“I had lots of fundraising events planned, including a sponsored dog walk, but lockdown due to Covid meant that everything stopped.”

Despite this, Mrs Rees announced that she had reached her £5,000 target on August 16 last year, which would have been her husband’s 67th birthday.

“I had so many donations from family, friends and neighbours,” she said.

“There was £600 from his funeral alone, and the undertakers could not believe the cheques coming in after the service.

“There were donations from the staff in Burns and Plastics Outpatients at Morriston Hospital, where I work, and our pharmacy staff raised £264 with a cake sale.

“It was humbling and inspiring how much Dave meant to everyone. My friend’s sister, a nurse in Bristol, was going to run the Bath Half Marathon to raise funds, but due to lockdown she did this virtually.”

Mrs Rees will be offered the chance to meet Davey and watch him in training.

“Although this will be an emotional day, it is a very poignant tribute to a very special man I am proud to call my husband,” she said.

Lost Dog Ends Up 300 Miles Away From Home | The Dodo – MDJOnline.com