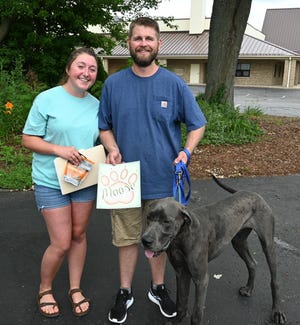 Friday was parole day for 13 four-legged inmates and one three-legged dog from Lakeland Corrections in Coldwater.

The program was developed over a decade ago between the prison and Refurbished Pets of Southwest Michigan. Even with a year of COVID-19 infections, especially severe in the prison,  precautions were taken and the training program continued with few issues.

After 10 weeks of training, the dogs were ready to meet their forever families in Coldwater after having been screened for the benefit of both families and dogs.

In the parking lot near the RPSM warehouse, everyone turned to see “Moose,” a great dane, get out of the SUV to meet his new parents Thomas and Kenzie Wooden.

“I am ready to be a Great Dane mom,” Kenzie said.

The 102-pound puppy easily bonded with the couple. Treats helped as he showed off his simple commands of sit, down and wait.

Her husband’s family has large dogs, including great danes and mastiffs.

RPSM President Michele Frederick said Moose was “a wild man when RPSM got him at five months old” from a shelter. He went to a foster home for five weeks to begin his socialization before entering the Lakeland training program. His feet are larger than fit his body which means he will grow into them.

The Woodens found Moose on the Pet-Finder website looking for a great dane.

“The adoption route is the route we wanted to go,” Kenzie said. “We learned about the RPSM program, what a great fit for us. Lucky we were the ones that ended up with him.”

Moose was so popular in Lakeland and loved by his handlers,  they paid to have a name sign made for his bed. They sent it along with Moose for the Woodens.

Another dog, Driefuss,  from this class, was a mixed breed found in the middle of nowhere and taken to the Elkhart Human Society shelter in Indiana.

“He was terrified of the world with a broken leg, so we decided to try and help him,” Frederick said. “The leg had to be amputated. He was sent to Lakeland to learn to deal with people and other dogs.”

Shy but lovable, he found a home with a single older man as his perfect fit. At his release, Driefuss had little trouble with people and other dogs.  His only problem came when he tried to raise his good back leg to go to the bathroom.

Each dog is microchipped so it can be returned if it does get lost. There is an adoption fee. There are regular vet bills, along with discounted costs for the special care that can run into the hundreds  for the rescued dogs.

RPSM relies on donations to pay for the vet care, food, and other items for the dogs. Gift bags go with the dog, which includes its towel or “place”.  It marks the safe spot where it slept each night. This so each dog will have a familiar smell and items for its new home.