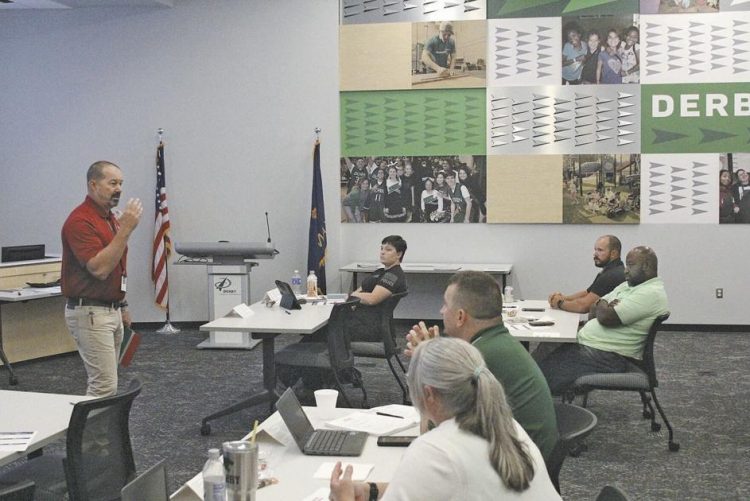 As part of the National Association of School Resource Officers, USD 260 Safety Security Officer Matt Liston has led a number of trainings across the country and even internationally (in Canada and the island of Saipan).

This summer alone, Liston has spent time in Pennsylvania, Alabama, Indiana, Florida and Kansas teaching a variety of courses offered by the NASRO. Recently, though, Liston got back to basics at home in Derby – leading a basic SRO training course from Aug. 2-6 at the USD 260 Administrative Center.

Liston more typically leads the other courses offered by NASRO (with basic training left up to new instructors), but knowing the value of it he was happy to take charge of the training offered in Derby.

Basic SRO courses typically touch on school safety, school law, special education and a variety of other topics, according to Liston. While they are intended to help law enforcement transitioning to the SRO role, he noted some of the information – like recognizing signs of sex trafficking – can be equally beneficially to other personnel.

“My idea, being an instructor, was getting security staff some training in some of this stuff, too,” Liston said. “Even though they’re not law enforcement, there’s a lot of stuff that relates to what they do on a daily basis.”

While there were no new SROs in the district taking the training, three Derby High School security personnel attended along with other staff from schools across the state.

Being an instructor with NASRO for 20-plus years, Liston has trained many of the SROs employed by Derby Public Schools – and around Kansas – after serving as the district’s first school resource officer starting in 1996. He also helped manage the district’s SRO program for a majority of his nearly 30 years with the Derby Police Department (retiring in 2019).

Serving in his new role as safety security officer, Liston said he has the freedom to do more trainings during the school year, but he noted the summer is often the busiest time for him – with SROs having more free time to seek out the NASRO programs and get updated ahead of the new school year.

“It’s one of those things with any law enforcement profession or job you have, even being a canine handler. You can’t just take your dog to training once and then expect the dog to be able to perform. You’ve gotta continue to get him trained,” Liston said. “Homicide detectives, whatever it might be, this is no different.”

A majority of Liston’s trainings now occur at state and national conferences, where the takeaways will always be different depending on the school district. Some may be strong in emergency planning and weak in mental health.

Collaboration between the schools and law enforcement officers, getting them on the same page, remains one of the key focuses of each training – something Liston is appreciative to still have the opportunity to do while serving USD 260.

“If I’m helping an officer or school administrator somewhere else keep kids safe because of what they learned from me then it’s worth it and I’ll continue to travel and continue to do it,” Liston said. “One of the things that we say a lot for this particular position, school resource officer, is you have to be properly selected and you have to be properly trained. NASRO is the gold standard as far as it goes with SRO training.”