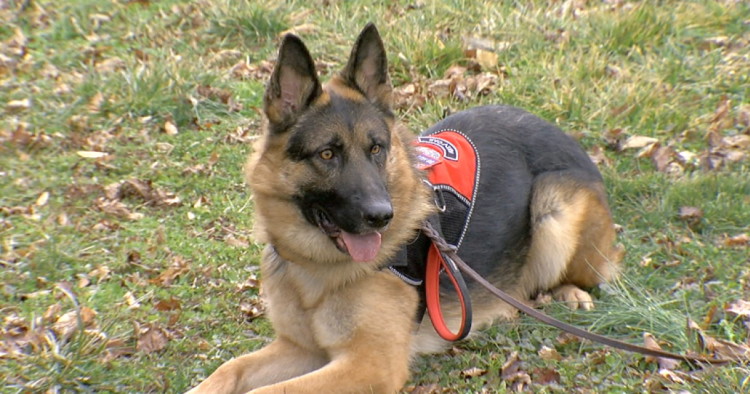 HEBRON, Ky. — A 2-year-old German shepherd in Northern Kentucky has a new mission, and a long car ride, in his future.

Zeus was given up by his family and sent to White Line K9 Training in Hebron, Ky., originally meant as a pet. But trainer Kari Dickerson said she saw something in him.

“[We] started working with him, started training with him and realized he’s going to make a great service dog,” Dickerson said. “He’s extremely personable and he learns very quickly.”

Then she got a call that would change Zeus’s plan, and will change a police department nearly 750 miles away.

“A buddy of mine said, ‘Hey I work with this officer,’ and I said, ‘OK,'” Dickerson said. “We started talking and I started interacting with Officer Zark and it was sort of a match made in heaven.”

Her mutual friend introduced her to Tulsa police officer Aurash Zarkeshan, who had returned to Oklahoma after four months in rehabilitation.

Zarkeshan was solo on the job for just six weeks on the morning of June 29, 2020. Then, Zarkeshan and Sgt. Craig Johnson were shot during a minutes-long traffic stop while negotiating with the driver to step out of the car. Johnson used a stun gun and pepper spray to no avail.

Police say the driver grabbed the handgun as the officers got him from the car. Johnson later died from his injuries.

Zarkeshan spent four months at a rehabilitation center in Colorado and returned home on Oct. 15. Sister station KJRH reported he earned the nickname “Tulsa’s Hope” for his heroic fight to live and return.

Now, he remains on light duty with the department.

“We really, really wanted to make sure he could get a dog that would be perfect for him,” Dickerson said.

Zarkeshan has another German shepherd in his family already, so Dickerson saw Zeus as the perfect match. And, on a fundamental level, this was personal for Dickerson.

“As a medic, we always help cops,” she said. “Cops are always on our side, we help the cops. It was a cute little way of going, ‘We’re going to be your backup again.'”

Dickerson has been in EMS for 20 years, a paramedic for 10 of them. It’s reflected in the name of her business, White Line K9 Training, and in its mission to make service dogs affordable.

“The idea is to transform rescue dogs to be service dogs,” she said. “I don’t have $20,000 in the bank, I don’t know many people that do, especially if you’re dealing with a child with severe medical issues or you personally have medical issues.”

She’s helped train therapy dogs for hospitals and courtrooms, along with service dogs for families and first responders.

Zeus’ training has focused on being present in public, not getting excited about new people or other dogs.

“He needs to be as proper as possible [when at work],” Dickerson said. “So at restaurants, there’s no begging at the table. He needs to be underneath.”

She called that “tucking,” getting under a table so restaurant workers and guests – or officemates – don’t know Zeus is there.

Zeus has had to get used to wearing different harnesses too, depending on what Zarkeshan may need from him. These final weeks, though, are for touching up his training

“Handing over the leash is going to be a sad moment,” Dickerson said. “But it will be OK.”

Zeus and Dickerson expect to make the drive to Tulsa next week.