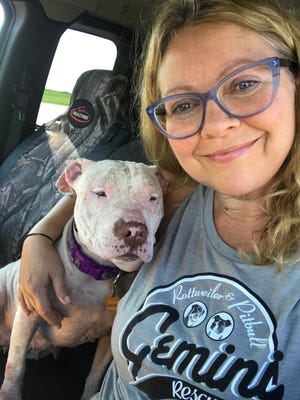 Recently, Talking Waters Brewing Company held a fundraising event through their Community Pint Night to raise funds for Gemini Rottweiler and Pitbull Rescue. The rescue resides between Montevideo and Madison and has been in business for twenty-one years.

Gemini Rottweiler and Pitbull Rescue Founder/Director, and Montevideo native, Jen Wøld says she has always had a love for animals, but never dreamed she would one day run an animal rescue. “I didn’t even really know a lot about what rescue was about, and what rescue groups did,” says Wøld. When her beloved Rottweiler passed away in 1998, Wøld and her husband began the process of looking for another dog and discovered rescue groups. “I knew there were animal shelters out there, but rescue groups were kind of an unknown thing back then. I thought – there are so many dogs in need. This is what I want to do,” she says. Wøld made the decision to explore the idea of starting an animal rescue, reaching out to existing organizations for mentorship. “I didn’t want to jump into it because I wanted to know the ins and outs of what rescue entailed. I wanted to learn what works and what doesn’t,” she says. “The rescue groups were really good about mentoring me and helping me get a good base of knowledge to get started.”

Wøld would soon realize that there was a real need for animal rescue in the local area. “It just snowballed and I was a little unprepared for how fast it took off,” she said. “At that time I worked with pretty much one breed, which was Rottweilers. In 2001, I adopted my first Pitbull into my own family, and she was amazing. Petey came from a rescue in Maryland. It was then that I saw the vast need for Pitbull and bully breed rescue. I saw how mistreated they were and how misunderstood they were.” Pitbulls have become the primary breed the rescue works with. “I think people tend to see what the media portrays them as, and that’s really the farthest from the truth,” Wøld says. “This breed is really people-oriented, silly, and loving. The majority of dogs that we’ve placed, we’ve placed with families with kids and other pets. There are exceptions where dogs just want to be single dogs and aren’t great with other animals, but they have individual personalities just like people, so we really try to make that match between a family and a pet. We have a very good success rate with very few dogs ever coming back for any reason.”

Running a rescue, Wøld has seen many dogs come into her organization from bad situations. “This breed is the most abused, but yet the most adaptable and forgiving dog. I’ve had a lot of different breeds come in. We’ve had labs and small dogs come from terrible situations, and I’ve found that bully breeds are the most forgiving,” she says. “They can be so mistreated and yet so resilient. As far as being a very personable, family dog, it’s funny because my husband always mentions when we get a new dog that comes from a bad situation, it’s immediately friendly and wagging its tail. That’s what I see from most Pitbulls and that is just what’s endearing to me about that breed. Over the years, we have had around 14 adopted dogs go on to become certified therapy dogs. I think that is a wonderful testament to their personalities.”

In 2007, Gemini Rottweiler and Pitbull rescue obtained their 501c3 non-profit status. Prior to that, Wøld worked the rescue almost entirely out of pocket. “Rescue is quite expensive. You have that food cost, vet cost, and the transportation for care. Even just gas driving back and forth transporting the dogs. I put on thousands of miles each year. We supported ourselves and eventually when we got our non-profit status it helped because we could solicit for donations and have those be tax-deductible for donors,” she said.

Gemini Rottweiler and Pitbull Rescue is a foster-based rescue and works with a handful of people, mostly in the metropolitan area, to secure foster homes for their rescues while they are waiting to be adopted. “If we could open the flood gates, it would just be never-ending because there are so many dogs in need, but we have a limit to what we can take in,” says Wøld.  Dogs that have more of a medical need stay on Wøld’s hobby farm so that she can transport them for veterinary care easily. The program takes care of anywhere from twenty to thirty-five dogs at a time. “A lot of dogs we take in are seniors and some end up just living out their lives at my home, knowing love in their golden years,” says Wøld. Over the 21 years, the rescue has placed almost 3,000 dogs. “For a small rescue, we’re kind of proud of what we’ve done and how we can help people in the community and rescue dogs.”

The most challenging part of running the rescue over the years has been having a continuous and steady stream of donations to support the dogs. “I’ve had my days when I just have to break down and cry because it’s very emotionally draining, it’s financially draining. The hardest thing for me is to ask people for money, but when you run a non-profit you have to have the mindset that people have to donate and that’s how we stay afloat,” Wøld says. “We have all volunteers and everybody’s time is donated, so every dime and every dollar goes to the dogs.” As a non-profit, Gemini Rottweiler and Pitbull Rescue works with several platforms for fundraising including Give MN with their biggest online fundraiser happening each November. The rescue also has a donate now button on their website.

Besides the stress of the financial costs of running a rescue, Wøld says dealing with some of the situations the dogs come into the rescue from is also at times heartbreaking. “The hardest thing emotionally is seeing what these animals come from and then making them a promise that they’re going to have a better future,” she says. The most rewarding thing is the lifetime relationships she’s built through the rescue. “I get Christmas cards and updates. We have a private Facebook group for our adoptive families and fosters, so they have a support network. I call them my extended family because I have all of these families I keep in touch with, even after all of these years,” she says.

Wøld works with each family or person interested in adopting to match the right dog to the right family situation. The dogs are adopted through the rescue’s website with an application process that includes references and home visits. As rescue groups tend to be well networked, Wøld works with a network of transporters including a friend who is a pilot to help with transportation of the dogs. “We have placed dogs all over Minnesota, South Dakota, Wisconsin, Iowa. We have placed dogs in Colorado and in Canada, and we even placed a dog in Germany several years ago,” she says. The rescue is also always looking for more volunteers that can help with transportation and fostering rescues. “Especially around here I feel like I’m lacking foster support,” Wøld says. “We do have fosters in the metro and northern Minnesota, but that also makes it a little bit difficult because I am so hands-on with all of the adoptions. The biggest thing I wish for is that I had more fosters locally. When people foster for us, we provide everything. We provide the food, the vet care, so basically, all you provide is the love, the structure, and training until the dog is adopted.”

Wøld also provides rescue for horses and other animals. “Our farm is set up as kind of an animal sanctuary, so while we work mainly with dogs, we have rescued horses since 2010. We’ve taken in a number of horses that have just kind of found their retirement at the farm. Our rescue supports nine horses right now. We’ve had a couple of potbelly pigs, some goats. We are a little hobby farm and we can accommodate a few of those, but we turn a lot of animals away, which I hate doing but we have to have a limit,” she says. Keeping the animals limited helps Wøld to stay as hands-on as possible with the adoptions, which she feels is the most important part of ensuring a rescue is placed with a new family permanently. “There’s a lot of big rescues out there with hundreds of volunteers and we’re really small but mighty. I think we’ve done a lot of good things, and I love what I do. It’s very fulfilling,” she says.

More information about Gemini Rottweiler and Pitbull rescue can be found on their Facebook page, or their website: http://www.gemini.petfinder.com/.