Maharashtra: Revamp of training, services of state police dogs on the cards 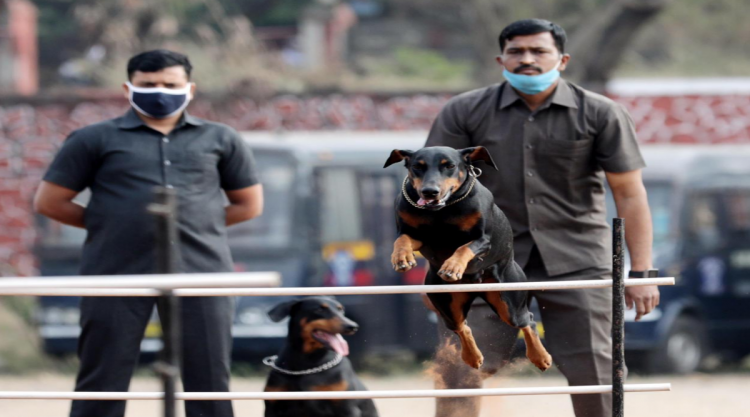 THE TRAINING and service norms of police dogs in Maharashtra are set to undergo a much-awaited revamp with a new service manual for the canine squad ready for adoption and a proposal of a new dog training school in Pune, comprising a dog hospital, under consideration.

The training of police dogs in Maharashtra falls under the purview of the Pune-headquartered Criminal Investigation Department (CID) of the state police. All the dogs, which are in the service of the state police, undergo specialised training modules and three refresher courses yearly at the Dog Training School of Maharashtra Police, located on the premises of Shivajinagar police headquarters.

Established in 1962, the school currently trains canines for four tasks. First is to track for crime detection under which dogs are trained in detection, recognising and tracking specific scents. Others are narcotics detection, patrolling-guarding duties and for explosives and bomb detection for the Bomb Detection and Disposal Squad (BDDS) operations.

Currently, Maharashtra has 352 police dogs in its service which include 228 for tracking, narcotics, guarding-patrolling and 124 for BDDS.

At present, various aspects of recruitment, training, health and the service are undertaken as per the Maharashtra State Police Dog Squad Manual. Prepared in 1967, the manual has undergone only a few small upgrades over the years.

Sambhaji Kadam, Superintendent of Police (Technical Services) for the CID, said, “We have prepared an upgraded manual for the police dog squad that lays down norms right from the recruitment of the dogs to their retirement. The manual has been recently sent for a final approval of the Director General of Police of Maharashtra. A proposed dog training school is also in the pipeline and a five-acre land has been allocated in Vadachi Wadi area on the premises of SRPF Group.”

Speaking about the process of preparing the new manual, Deputy Superintendent of Police Nitin Landge of the Dog Training School said, “We have tried to incorporate all the best practices from various police security forces in India and also from the state police. The new manual lays down norms for selection of dogs as well as its two handlers, their healthcare and medical issues, including vaccination, etc, training for various fields, refreshers courses, performance examination of dogs, their living conditions, preparation for various national competitions etc.”

In addition to various latest training facilities, the proposed training school at Vadachi Wadi is also going to have a dog breeding centre and a specialised police dog hospital.

While the current premises of training school at Shivajinagar police headquarters is falling short of space, it also does not also have proper living arrangements for the dog handlers. There is no scope to increase the capacity from the current 20 dogs, officials said. The proposed school, they added, will have a capacity to accommodate around 50 dogs and include accommodation facilities for their handlers.

A new uniform for the dog handlers is also under consideration which will include a T-shirt instead of the current norm of handlers wearing either regular police uniform or a ‘safari suit’. Various components of the proposed uniform have been designed to be suited for long-hour duties of dog handlers.

Like most of the security forces in India, the state police recruit dog breeds like Doberman, German Shepherd, and Labrador Retrievers. Since the last three years, they have also started inducting Belgian Malinois. A proposal to induct Mudhol Hounds has also been under consideration.

Puppies are selected for service at the age of 45 to 60 days. Till the age of six months, these dogs remain stationed at their respective service unit getting to know the two handlers and undergoing basic obedience training.

At the age of six months, they come to the Dog Training School where they undergo training modules of six months or nine months, depending on the category of duty. While the dogs retire from the age of 10 years, they have to undergo one month of refresher course every three years, for which they again come to the police training school. A procedure has also been laid down for the post-retirement care of the dogs with a large number of cases of handlers ending up adopting the dogs.

During the lockdown period, when the Dog Training School remained largely closed for new admissions, the training of new recruits and refresher course trainees was conducted online. During the lockdown period, a total of 50 new recruit dogs and 43 dogs due for refresher course were trained via online classes, where the officers from the training school sent daily tasks and instruction videos, while the handlers sent the training videos on daily basis for continuous evaluation.

A common challenge faced by several dog handlers, whom The Indian Express spoke to, was unavailability of air-conditioned vehicles for taking dogs to the places of duty from the district dog unit. In rural jurisdictions, where the dogs have to be transported long distances, non-air-conditioned vehicles, they said, expose the animals to extreme heat.

Some units in the state have also been facing problems of upkeep of the kennels and the living facilities for the handlers.

A senior veterinarian, who has also worked with the police forces, said, “While the visual of a police dog doing a salute and detecting cases sounds interesting, the jobs these animals perform are very tiring and stressful. Many of dogs develop lung ailments due to continuous exposure to narcotics and explosives or just continuous duties. Maharashtra Police do have norms to have multiple dogs at one single unit to share the workload.”

The sanctioned strength of police dogs for the state is 450 as against current strength of 352. Continuous addition of new puppies is underway at individual police unit level to bridge the gap. Officials believe that at full strength, it could be ensured that there is proper division of workload among the in-service dogs.

Maharashtra police currently has 352 dogs — 228 for tracking, narcotics, guarding-patrolling and 124 for BDDS

Each dog has two handlers, who serve with the dog throughout their 10-year-long service

Over last four years, Maharashtra has seen increasing number of cases in which dogs have a played a crucial role in detection of the crime. The number of cases which could not have been solved without the contribution of the dogs in 2017 are 30, followed by 46 in 2018, 56 in 2019 and 62 in 2020

Love is in the Air! Against the Grain Pet Food Helps Pet-Parents Give the Gift of Better Nutrition this Valentine’s Day