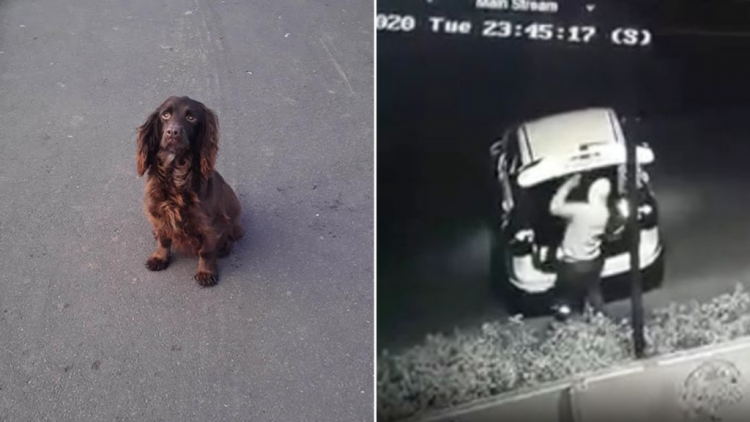 A man is appealing to the public for help after his dog was stolen seven months ago, with local police reaching a dead end in investigations.

Thomas Calvert from North Yorkshire, in England, has issued a fresh appeal for help finding his chocolate cocker spaniel Lassie, who was taken on July 28 last year.

His plea for help came after CCTV footage was released of the robbers escaping with Lassie at 9.45pm.

In the footage above, two male robbers can be seen carrying Lassie by her legs and throwing her into the boot of their car, before driving away.

“Lassie has been missing for 7 month(s) and in that 7 months its (sic) been full of heartbreak especially seeing her on CCTV getting carried by her back legs and bundled in to a waiting car,” worried owner Calvert posted on Facebook.

Calvert hoped to “make his post viral” so that news of Lassie could reach people far and wide – and hopefully spark a memory.

“We need to find my best friend,” he added.

“Has anyone rehomed one just like her or anyone know anyone who has?

“Please message me if you see her.”

“I won’t stop till she is back were she belongs with me,” he continued.

Calvert added that he could hear his dog yelping in pain as she was unceremoniously thrown into the car.

Calvert described his beloved dog as chocolate brown, with a patch of white and roan (a mix of white and coloured hairs) on her chest.

He has been looking after Lassie since she was eight weeks’ old – she was six when the two men kidnapped her.

“Being the victim of any theft is distressing, but when it’s a pet it is especially upsetting,” a North Yorkshire Police spokesman told The Hambleton Today.

“Officers have conducted an investigation into this incident, which has included extensive enquiries and reviewing CCTV from multiple sources.

“If anyone has information which they haven’t already shared with the police, please contact us on 101 and select option 1, quoting reference NYP29092020-0112.”