How Many Hours A Day Do Dogs Sleep & How Much Do They Need? 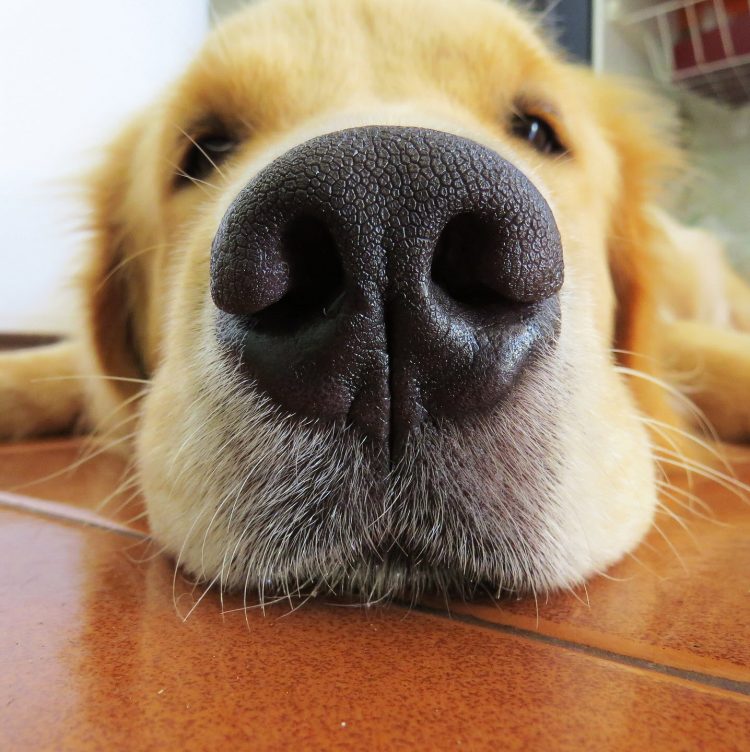 This is a question that many pet guardians grapple with, especially when they notice irregular sleeping patterns in their pet friends. On average adult dogs sleep for 12–14 hours a day, although the duration can vary depending on other factors such as breed and age. If your furry friend sleeps more or less than this average, it shouldn’t worry you as every pet is different. 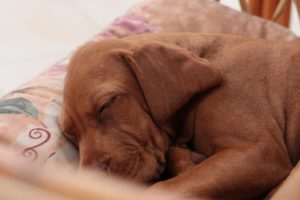 Working dogs, for example, may stay awake longer due to the physical and mental demands they face on a daily basis, while dogs that lead more sedentary lifestyles will spend most of the day playing and sleeping. It’s not abnormal for a dog to spend as much as 50 percent of the day asleep, 20 percent engaging in activities, and the remaining 30 percent awake but relaxing without really doing anything.

When it comes to age, older dogs require more sleep simply because they tend to tire out more quickly and therefore need more rest in order to function properly. Puppies, on the other hand, use up a lot of time and energy playing with new toys and exploring their new surroundings and consequently end up needing as much as 18-to-20 hours of sleep to recover!

But unlike people, who usually spend all day awake and sleep at night, dogs don’t have a regular sleep schedule. Instead, they tend to have several short napping sessions during the day.

2. What Happens During A Dog’s Sleep?

Dogs’ sleeping patterns are remarkably similar to those of humans and comprise three-stages. At first, they go through a slow wave of sleep, during which there is a drop in breathing rate, blood pressure, and heart rate – this is known as the slow wave sleep (SWS) phase. This is the “dozing off” period whereby mental functions are slowed down although the body is still engaged.

Around 10 minutes later, they enter the rapid eye movement (REM) stage of sleep; this is when their eyes roll 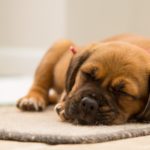 under closed lids, and their bodies make movements in response to their dreams. And herein lies the difference between our sleep and that of dogs arises. Humans, who usually stay awake for the whole day and spend most of the night asleep, use up to twenty-five percent of their sleeping time in REM. Dogs, on the other hand, spend only about ten percent of their sleep time in REM because their sleep schedules are less consistent. Since dogs tend to drift in and out of sleep in sessions – dozing off and waking immediately when they’re alerted by a stimulus, they wind up requiring more sleep in total to compensate for lost REM during their sleep cycles.

3. Why Do Dogs Twitch While Sleeping?

If you have ever taken time to watch your dog sleeping you may have noticed how he starts to twitch or quiver while in his sleep. He may also yip, snore and growl, and even move his feet as if he’s running. These noises and motions happen during REM stage of sleep are one of the clearest signs that dogs, like humans, also have dreams. A dog’s body movements are simply his way of “acting out” the dream and studies do suggest they are acting out doggy dreams, for example, Dobermans may chase away burglars in their dreams while Pointers will point at dream birds. However, if your dog curls up when he sleeps, you may not notice these movements.

If you notice your dog twitching in his sleep you’re better off leaving him to dream in peace; you should only take action if he seems distressed. Usually, the best way to do this is to wake him up gently by calling his name softly. In case he seems to be having a nightmare (dogs do have nightmares), talk to him soothingly to help him calm down. Do not use your hand to stir your dog from sleep as he may be touchy while sleeping which can lead to you getting bitten.

It’s also advisable to look out for dips in temperature which can cause your dog to twitch while sleeping – it’s his body’s way of trying to stay warm. In such situations, you should turn up the heat or cover him with a blanket.

For reasons that don’t seem to have a scientific explanation, young puppies and older dogs tend to dream and move more in their sleep than adult dogs. If you happen to be sleeping close to them, they may inadvertently wake you up with their jerking body movements.

4. The Difference Between Sleep Twitching & Seizures

Pet owners also need to differentiate between twitching while dreaming and a seizure. When your dog is experiencing sleep twitching, he may make a few jerky movements then fall back to a quiet sleep. In such a case he will wake up if you call his name. However, during a seizure, a dog’s body becomes stiff, undergoes severe trembling and may lock up. He can become unconscious, pant excessively and will not react to his name being called.

Apart from seizures, sudden changes in your dog’s sleeping habits can also be a cause for concern. Such changes may be brought about by:

5. How Much Should Senior Dogs Sleep? 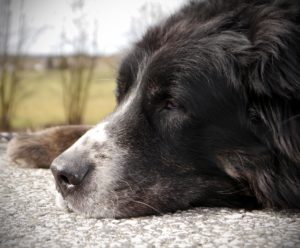 It is quite normal for an older dog to spend more of the day sleeping — up to 16 or 18 hours – even though some of these hours will be spent resting quietly and not necessarily in real sleep. Senior dogs can also oversleep due to pre-existing medical conditions such as osteoarthritis and hypothyroidism.

Canine cognitive dysfunction is another disease which affects the way a dog sleeps. Similar to dementia in people, it often results in a flip-flopped day/night sleep schedule which can mess up a dog’s sleeping cycle. Luckily there are different therapies available to help alleviate this condition and slow down the effects of the progressive cognitive disorder.

6. How to Improve Your Dog’s Sleep Habits

If your geriatric dog has a hard time sleeping, you can try doing the following things help him (and yourself) get a good night’s rest.

7. Why Exercise is Important for Managing Sleep 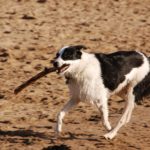 longer than their more active counterparts. Inactive dogs are also more likely to suffer from insomnia. It’s therefore important to ensure your dog has a well-balanced activity schedule that incorporates mental and physical stimulation to prevent problems with his sleep patterns.

Footnote: Sleep Is Important For Training

On a different note, research has shown that when you allow your dog to get some sleep after training can greatly improve consolidation of the lessons learned. This can be explained by the fact that while your dog is asleep memories are sorted through during the REM stage and are finally stored in his long-term or permanent memory.” How To Evaluate Your Dog’s Health

How Long Are Dogs Pregnant For & How Do You Tell If They’re Expecting?

How Long Are Dogs Pregnant For & How Do You Tell If They’re Expecting?