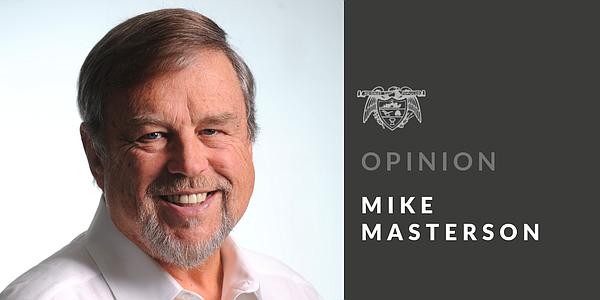 When last we left discussions of our 12-pound rescue, Benji was in the process of methodically claiming every room of our house as his own. After 15 months together, he’s also incorporated our daily routines into his preferred schedule and lifestyle.

And I gotta say, based on observations of the many dogs Jeanetta and I have enjoyed across our lifetimes, this little 6-year-old blend of Chihuahua and fox terrier is the closest in every way possible to a reincarnated human. There are days when we look at each other and shake our heads in disbelief at his home sapien-like behavior.

He often spends half the night on her side of the bed and the other on mine, arising occasionally during the night to awaken us from dead slumber with kisses on our noses, wildly shaking his golden coat. Jeanetta awakens most mornings with his head nestled between her neck and shoulder, much like a human infant.

I’ll digress to say animal guru and friend Frankie McCroskey once explained that if extraterrestrials were pondering who ruled this planet, their discussion likely would go like this:

First alien: “Those four-legged furry creatures with wet noses and tails clearly are in control.”

Second alien: “Why would you say that, Kritzak?”

Lots of truth in that.

Benji also has particular tastes, unlike most canines. While most dogs can’t wait to dive eagerly into their daily meal, he routinely sniffs, examines, then may–or may not–dig in, depending on his mood and preferences. Last week, he turned down a McDonald’s hamburger patty. Unimaginable.

And when he does begin to eat, it’s either one bite at a time that he carefully picks from the bowl and carries to his nearby bed, or insisting on being hand-fed by Jeanetta, who has established her proven method for spoiling him rotten.

We understand this is our doing as the humans who’ve set his expectations. But at our age, we don’t give a soggy kibble as long as he’s providing companionship, boundless affection and endless laughs.

When Benji’s stomach is rumbly and obviously upset, he’s learned to climb up in Jeanetta’s lap in bed and crawl to within a half-inch of their noses touching to let her know he needs Pepto Bismol, which she provides. I assure you it’s true. The boy also eats sauerkraut, blue cheese and horseradish.

Then he usually returns to the foot of the bed to spend minutes pawing, flopping, twisting and even using his teeth to pull and shape the covers just right before plopping down with a sigh of achievement. It always looks the same to us as when he began his self-appointed reconstruction projects.

On cooler nights, he crawls to our shoulders in bed and makes it clear he’d like to slip beneath the covers, which, of course, we oblige.

Spotting his mood of the moment is simple. Multiple tail wags means joy. Medium wags means he likes it. A twitchy half-wag denotes general approval. Dead still reveals that he’s less-than-enthused. He also expresses his approval through his tongue. Lots of licks to his upper lip means all is good.

Although Benji loves virtually every human he meets, even hopping into their laps to give each visitor a kiss on the nose, his favorites clearly are other dogs, big and small. I’ve never seen a dog so eager to drop to his front legs with rear hoisted in the air and emit a friendly “ruff” as an playful enticement to other canines to give chase.

Sometimes they oblige. When they don’t, he keeps after them with soft throaty growls that unmistakably say, “Come catch me if you’re dog enough.” That’s often just before he spins around to bump his backside against them in playful fun.

As with most who have pets, this independent little man has captured our spirits and taken up residence in our hearts.

Lately, some friends have brought their dogs over for playdates. He has a girlfriend his same size named Lulu who lives with her owner, Barbara Bell, less than a mile away. When they get together, sparks fly as they sprint from one end of the yard to the other, playfully grabbing and licking each other as they romp.

During one excited moment, Benji grabbed Lulu by the scruff of her neck and began pulling her like a furry little caveman across the floor. Barbara smiled and said: “You know, I think she likes that.”

Mind you, the boy is fixed, as in surgically. But that doesn’t deter him in the least from naturally desiring to be frisky (if you get my drift).

During evenings, he spends an hour or so in my recliner before hopping down then back up into Jeanetta’s. He’s an equal opportunity pooch in that way. This routine continues until just before 7 each evening when he arises and begins staring impatiently back and forth at us.

In his desire to follow a schedule, he knows the time we usually head for the bedroom to finish the evening. Otherwise known as “go back” time.

Sometimes, when we fail to follow that expectation, he stands impatiently on the edge of Jeanetta’s recliner and hops up and down on his spindly front legs as if this will hurry us toward the bedroom.

Finally we ask, “Do you want to go back?” That always prompts a tail-wagging explosion of sheer joy with floppy ears perked and an unmistakable expression that might as well be asking, “What’s been the holdup?”

The other night we went until 8:15 before asking if he was ready to go back. He laid in Jeanetta’s chair and turned his head away from each of us in an obvious pout that left us belly laughing. We imagined his thoughts: “So now you want to go back, eh? After all the dancing I’ve been doing for an hour to get you there?”

This predictable routine reassures us even further that he indeed was human, perhaps even a tad obsessive-compulsive in a previous life.

And while he feels affection for everyone he meets and never barks at people, should a 120-pound Great Pyrenees get too close to Jeanetta while she’s holding him (as happened the other day), it’s Katie-bar-the-door. Benji uncharacteristically snarled, bared his teeth and lunged toward the canine 10 times his size as if such carrying-on would intimidate the massive interloper. It didn’t.

Lo and behold, these infrequent snits of jealous protectivity seems to work, since far larger dogs invariably shy away from his warnings. Ralph Guynn from Harrison correctly observed that it’s obvious little Benji has never looked in the mirror.

I’ve come to believe the dogs who become members of our individual families (packs) also develop a connection of consciousness with us. Skeptics can believe as they will about such a psychic connection between dogs and their masters. Yet one only need read parapsychology researcher Rupert Sheldrake’s fascinating book “Dogs That Know When Their Masters Are Coming Home” to become a believer.

When Jeanetta is away for a while, he lies on the fluffy back of our sofa, looking out the front window at the driveway and street. I call it doggie TV. He can fall sound asleep before suddenly opening his eyes and sitting up to watch the window minutes before she pulls in.

Since he has no cell phone (yet, anyway), I wonder how he (and not I) intuitively knows when she’s on her way home. The only answer I can imagine is (like Sheldrake’s research revealed) his consciousness is somehow connected with hers as a member of our pack.

OK, valued readers, I believe I’m fairly well caught up on relating the saga of life with Benji. Rest assured I’ll continue to keep notes in my attempt to prove the furry little man once was a human before evolving to higher levels of unconditional love and advanced consciousness.

Sometimes GodNods can appear in the smallest of places and unlikeliest of circumstances, as evidenced by a neighbor who recently told me about hers.

“I often talk to my plants while working in my flower gardens, and also find it a good time to have a conversation with Jesus now and then,” she said.

“I had a barren little spot in the garden where I could get nothing to grow. So in my mind, I asked Jesus to please help me make something pretty grow there.

“A few days later, I noticed many tiny seedlings popping up and later learned they were called ‘Lamb’s Ears.'”

Mike Masterson is a longtime Arkansas journalist, was editor of three Arkansas dailies and headed the master’s journalism program at Ohio State University. Email him at [email protected]