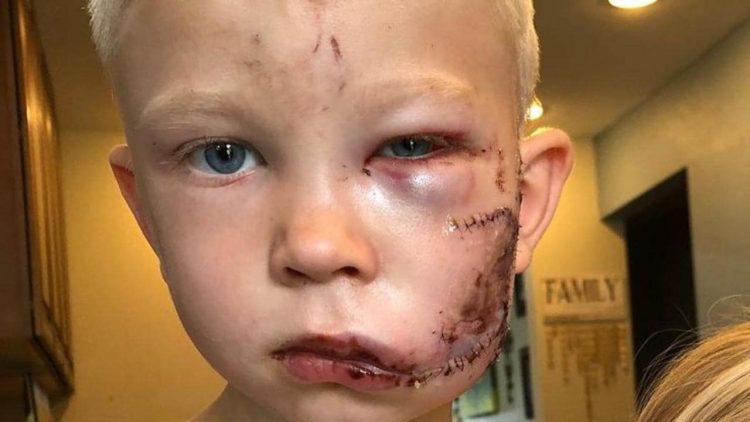 The parents of Bridger Walker, whose face was horrifically injured when he bravely saved his sister from being mauled by a dog, have unveiled his incredible transformation.

Bridger, 6, from Wyoming in the US, was left with 90 stitches during the July 9 attack last year, and a huge scar snaking down the right side of his face.

Now more than five months after the awful attack, his dad Robert Walker has shared photos of the boy’s face, describing his progress as “nothing short of miraculous”.

“Bridger has now had three laser treatments, and at his last treatment he also had a steroid injection to help with some of the tightness,” he wrote alongside three dramatic before and after photos.

“Bridger has full sensation, does not have any drooping, and has not lost any muscle control,” he continued.

“We have gone from genuinely wondering whether he would ever smile again to hardly noticing his scars.”

His scars are fading thanks to the help of some top skin experts, Dr Dhaval Bhanusali, Dr Cory B. Maughan, and Dr Sandra Lee (aka Dr Pimple Popper).

The dermatologists are treating Bridger pro bono after his story hit headlines and touched hearts around the world.

“We are so very grateful for what @drbhanusali and @corymaughan have been able to accomplish in such a short amount of time,” Robert added, explaining Bridger still is “shy” around dogs but is “slowly getting over his fears”.

In the new photos, Bridger can be seen smiling, even posing with the family’s new puppy, Loki.

Bridger, who stood in front of the dog that attacked him when it came running towards his four-year-old sister, was widely praised his selflessness after his aunt paid tribute to the boy on social media.

A slew of Hollywood actors, including The Avengers stars Chris Hemsworth and Mark Ruffalo, also praised the little boy’s actions.