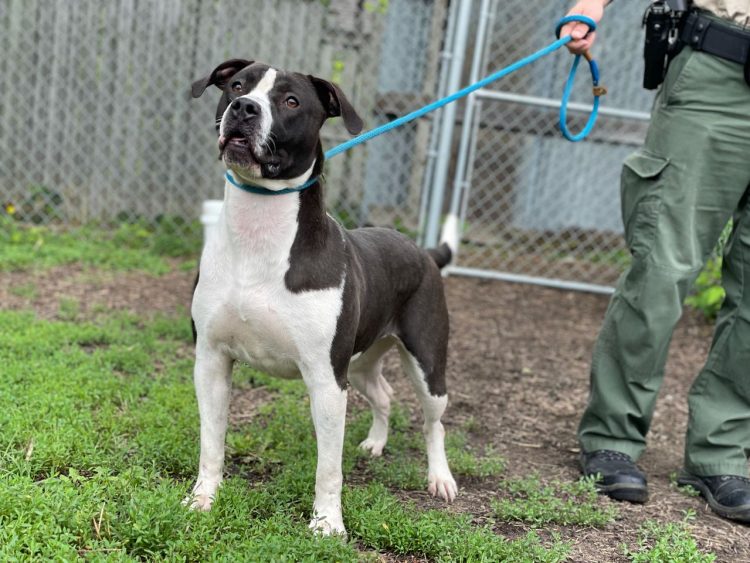 SAGINAW, MI — In a black-and-white blur, River the dog lunges for her pink dragon.

The toy squeaks as River pivots and plays with doggish delight. She’s a bundle of energy and seems ready for the day, starting here in one of the enclosed yards at the Saginaw County Animal Care and Control Center.

Where River lands next is anyone’s guess, but the officials and volunteers at the shelter hope it’s a happy home, full of a lot more love than the place they found her.

Almost three months after the 2-year-old black-and-white pit bull mix made headlines following her rescue from an uninhabited island, River remains ready for adoption. Officials here are searching for the right fit.

When she arrived there in April, River weighed 51 lbs., an emaciated state for a dog her frame. In the weeks since — thanks to some love and more than a few Starbucks Puppuccinos — she’s added 12 lbs.

“She’s a healthy weight now,” says Logan Smith, the shelter’s kennel manager and deliverer of those Puppuccinos so popular with her. “She’s very, very friendly.”

And a bit of a social media star. An image of River holding a tennis ball in her mouth while happily rolling on grass has served as the animal shelter’s Facebook profile photo since June, earning more than 100 “Likes.” Other posts featuring River receive much engagement from Facebook users.

Residents have sought River for adoption since she made the news, but officials at Saginaw County Animal Care and Control Center say she possesses characteristics that limit her potential matches. So, she remains unadopted. For now.

“She is very dog-selective, so we don’t want to match her with a family with another dog,” Kanicki says. “She wants her own person; not to share.”

And because of her size, River would not be a good fit living with children 12 or younger, Kanicki says.

One prospective match fell apart recently because of both limiting factors.

“She belongs with someone with an active lifestyle,” the shelter director says. “Our girl deserves a nice home. She’s been through a lot.”

Saginaw County Sheriff’s deputies and Saginaw County Animal Care & Control Center officers rescued their girl in April. She was discovered pacing Green Point Island, an uninhabited chunk of land at the junction of four waterways — the Cass, Saginaw, Shiawassee and Tittabawassee rivers — near the coast of James Township. Authorities suspect River was deliberately abandoned on the island. Wounds on her body suggest she was burned, perhaps intentionally, Kanicki said.

A lot has changed since then. Along with the added weight, River’s wounds have healed. And she’s not nearly as shy as the dog that once evaded island rescuers for more than a day.

When Smith brings her into one of the shelter’s enclosed yard, volunteers cheer River’s arrival. Once the leash comes off and the pink dragon is tossed, River runs and hops at the toy, interacting seemingly with joy with any nearby humans.

Strangers seem to be trusted quickly after only a few sniffs.

“Look at how beautiful she is,” says Lori A. Brown, one of those shelter volunteers who plays with River regularly. “She needs a family that will go on adventures with her. She’s ready for an active lifestyle.”

As if understanding Brown, River nudges her body against the woman’s legs — dog-tongue hanging — and looks up with her big brown eyes at the volunteer.

The adoption fee is $125. River has been spayed and neutered, and is up to date on vaccination and rabies shots, and tested negative for heart worms.