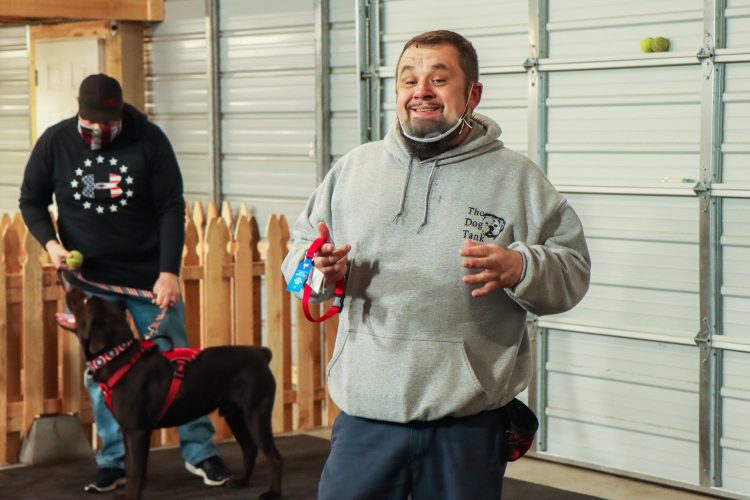 Editor’s Note:The Chronicle is working to assist local businesses suffering from the effects of the COVID-19 virus spread and associated government orders to close or limit commerce. There will be a feature on a local business in each edition of The Chronicle and at chronline.com moving forward. To be considered, email reporter Eric Trent at [email protected] Additionally, The Chronicle will continue to offer its coverage of the coronavirus and its effects across the community, state and nation free outside of our paywall at chronline.com.

NAPAVINE — Shane Goin started Dog Training by Shane two years ago offering private lessons, boarding and training. Based out of his home, he was forced to rent space in order to operate his classes. Two months ago, Goin created The Dog Tank, an expansion and merger of his dog training business that’s a one-stop shop for all canine behavioral and social needs.

Goin was raised with German shepherds and always had a love for animals. It wasn’t until after he broke his leg while working as a union carpenter that his doctor suggested he find a different line of work.

He began researching careers while bed-ridden and recovering from the injury. Dog training was the one that jumped out to him. He graduated from his first apprenticeship program at the Academy of Canine Behavior in 2003 and has been in and out of training since then.

He started his personal business, Dog Training by Shane, two years ago after seeing a real need out in South Lewis County for dogs that are unable to go to standard doggy daycares, those that are high-energy, tight knit or maybe a little aggressive. There are a lot of older couples who don’t have the means to exercise a high-energy dog, he said. That’s where The Dog Tank steps in.

“Whatever the case, dogs that need a little bit more exercise and attention, that’s kind of the whole goal; to provide that through The Dog Tank,” Goin said.

The Dog Tank has its own facility, where Goin runs group classes, including puppy and general-age obedience, private lessons and specialty training. Goin is hoping to expand to a daytime exercise and board-and-train facility as well. That would include programs throughout the day where dogs could come and get the exercise they need that wouldn’t be allowed through normal doggy daycare programs.

Getting proper amounts of exercise for dogs is oftentimes one of the biggest issues he sees with dog behavior.

“Not being able to do something as simple as getting the dog out and walking them on a regular basis or play ball with them,” Goin said.

The obedience and behavior aspect is also equal parts dog and owner, he said. Training comes down to leadership, consistency, and repetition. The whole goal of training is to improve the means of communication between pets and their owners.

The bulk of Goin’s work involves leash training; teaching dogs how to walk on a leash and leash manners, such as heeling. He also does a lot of impulse control and verbal commands, which teaches a dog to settle down. Mental stimulation is just as important as physical stimulation, he said. He often sees dogs that spin circles and pace around the house all day. So he teaches them a go-to-your-bed command to relax and calm their state of mind.

“Those are two of the biggest things I see,” Goin said. “And just a general lack of exercise; especially this time of year with the rain and everything, not being able to get out and being cooped up.”

With the pandemic, group classes are limited to five, smaller than what they will be after COVID-19 has subsided. Fortunately, Goin’s business hasn’t been impacted to the degree other businesses in the area have been. Most of the training is just Goin working with the dog, so the owner can easily social distance 6 feet away.

Goin said the reward and satisfaction of a dog going home and having a successful transition is what keeps him going after 17 years of training. He often works with the kids in a household who also want to learn how to train their pup.

“I just love seeing the happiness and smiles on peoples’ faces after they’ve worked on some things, established a real good bond and line of communication with their dog,” Goin said. “I like getting the whole family involved and seeing the kids out there. Just building relationships that are lifelong is pretty rewarding.”

More Information on The Dog Tank