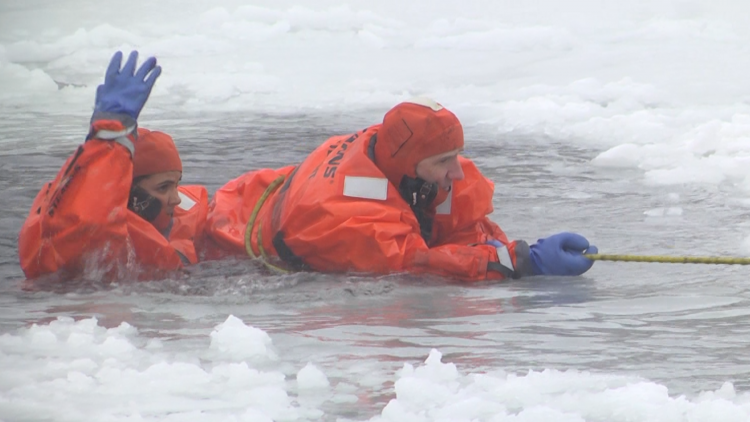 
Centennial Beach is closed to the public during the winter, but open to the Naperville Fire Department conducting life-saving training exercises for performing a water rescue in ice-cold temperatures.

The training dealt with the hypothetical situation of multiple people and a dog having fallen through the ice.

“As you can see behind me we have setup a scenario where the firefighters will have to determine how many people are out there and how quickly they have to get these people off the ice. They’re going to evaluate one talking person and then they see one unconscious child. So in this situation they will go for the unconscious child first to remove him because he’s in the immediate danger being unconscious being exposed to the weather, move him to ambulance and then they will perform rescue of the conscious person,” said Chuck Gros, Water Team Coordinator with the Naperville Fire Department.

Specialized equipment like a subsurface suit helps keep rescuers warm and dry for several minutes, which is essential not only for rescuing people they can see but checking under the ice sheet for anyone who might be trapped.

In Midwest towns such as Naperville, fluctuating temperatures between cold and warm can make the strength of the ice unpredictable. The best advice to avoid a rescue is to stay off the ice.

But if you do fall through…

“Don’t panic. You have time to start climbing out. As soon you break through, immediately try to turn around and follow the same footsteps because the footsteps are actually solid areas. That was ice strong enough that holds your weight. If you go back in that direction, that is actually the safest direction for you to go in to get out of that situation.” said Chuck Gros, Water Team Coordinator with the Naperville Fire Department.

If you see someone else or even an animal fall through the ice, call 911 immediately. While you wait, if it’s possible to talk to the victim and get information from them share that information with the rescue team upon their arrival. Throw a stick or other flotation device out to the victim to help them stay above water but do not walk out onto the ice yourself.

If you have a story idea or news tip you want to share, we want to hear from you!

Get daily hometown news and sports delivered to your inbox!