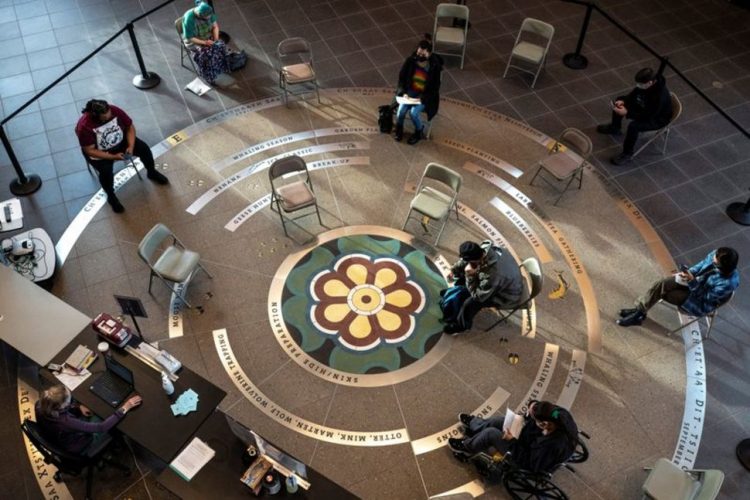 ANCHORAGE, Alaska (Reuters)Despite its sprawling geography and often-inhospitable climate, Alaska ranks among the top U.S. states for getting COVID-19 vaccine into the arms of its residents, and its indigenous population has played a major role in that achievement.

With a history and culture deeply shaped by deadly outbreaks of disease that have periodically ravaged remote corners of their subarctic homeland, Alaska Natives have aggressively led the way on inoculations against COVID-19 for the state as a whole.

Through their federally recognized sovereign powers, Alaska Native tribes has secured larger vaccine supplies from the U.S. Indian Health Service (IHS) than the state government has obtained for itself, said Tiffany Zulkosky, a Yup’ik and state legislator from the southwestern Alaska community of Bethel.

Acting Anchorage Mayor Austin Quinn-Davidson, who is white, tweeted a photo of herself getting a shot courtesy of a Native organization in early March.

“Alaska is leading the country in vaccinations because of the incredible work and generosity of our Tribal partners,” she wrote.

By early April, more than 42% of all Alaska residents aged 16 and older had received at least a first dose of a COVID-19 vaccine, ranking near the top among states with the highest rates of inoculation per capita and by percentage of population.

The percentages run higher in regions dominated by Native populations, which have been particularly hard hit by the pandemic.

Although precise figures are hard to come by, a significant number of shots received by the general public come from the IHS supply or are being administered by tribal networks, said Zulkosky, a vice president of the Yukon-Kuskokwim Health Corp, which serves a region the size of Oregon.

Besides the impetus of achieving herd immunity, “there is that cultural value of sharing and taking care of one another,” she said.

In some extremely remote Native villages vaccination rates are now approaching 90 percent, according to state data. Tribal providers prioritized those villages for early vaccine delivery because they tend to have limited medical services and often lack modern plumbing and sewage systems.

Karma Ulvi, tribal leader in the onetime gold rush outpost of Eagle, home to about 120 people – half of them Alaska Natives – on the Yukon River near the Canadian border, said the arrival of vaccines there came as a great relief.

By early April, nearly the entire community was vaccinated, Ulvi told Reuters, stressing the importance of immunization in a place where only about three in every 20 households have running water, making good hand hygiene difficult.

“There was just an overwhelming happiness among people here that received it,” she said of the vaccines.

With limited phone and internet service and no wintertime road access, the nearest hospital is at least three hours away by aircraft. Even then “it’s very hard to be in touch with the plane if there’s an accident or if someone is sick,” Ulvi said.

The campaign hearkened back to the famous 1925 Serum Run, when a dog-sled relay delivered life-saving diphtheria medicine to Nome. The Yukon-Kuskokwim Health Corp dubbed its COVID-19 vaccine-delivery system Project Togo, after a celebrated lead dog in the storied serum run.

Alaska Natives imposed some of the nation’s earliest and most robust lockdowns, mask mandates and other rules to curb the pandemic. The virus reached rural sites nonetheless, with some devastating results. Indigenous people accounted for 37 percent of COVID-19 deaths in the state last year, more than twice their proportion of the population, according to the state epidemiology office.

The Native COVID-19 death rate was nearly four times that for white Alaskans, according to state data.

The present-day tribal response is also colored by memories of past trauma, including the 1918 influenza pandemic that shattered Native communities, virtually wiping out entire villages.

The “Great Flu” is a particularly vivid cultural loss, said PJ Simon, chairman of the Tanana Chiefs Conference, a consortium of Athabascan tribes in interior Alaska.

“Some families will never know their last name because they all died,” he told Reuters. “People were reeling. Sometimes just a kid or a boy or girl survived and the rest of the family died and everyone else was trying to get back to normal, much like we are trying to do right now.”