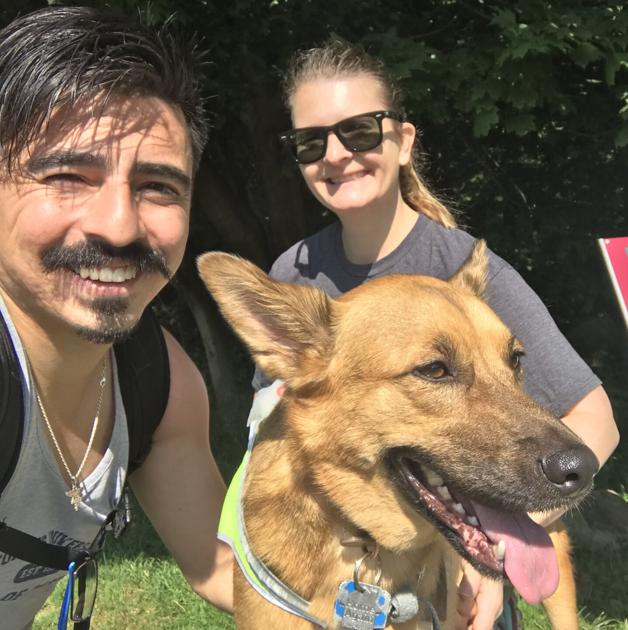 Medical training came in handy for Sergio and native Walla Wallan Erica Jacobson Camba, who nursed back to health their duplex neighbor’s maltreated dog in Grenada after Sophie was savagely wounded by a machete.

Since the couple’s loving intervention, Sophie has lived a charmed, well-traveled life, but not without bumps en route.

From 2017-2019, Sergio studied at the New York-based St. Georges University campus on the tiny Caribbean island, and Erica worked there. He graduated from medical school in March 2021 in Brooklyn, New York, specializing in emergency medicine.

Erica received her advanced training while he was in school and is a nurse practitioner specializing in family practice. She lived for a year in 2019 in College Place with parents Neil and Sherilyn Jacobson while doing clinical rotations, including pediatrics at Walla Walla Clinic.

The couple met when she was a registered nurse in emergency triage at Harborview Medical Center in Seattle, and he was an emergency medical technician with the American Medical Response ambulance company there.

Erica said their neighbor in Grenada, a vet student, was overwhelmed by his studies and other issues and sorely neglected Sophie, then about 1 year old. He kept the underfed German shepherd mongrel mix tied up in the yard, unprotected from the hot sun and lacking water and shelter despite the rain and thunderstorms that often swept through, Erica said.

The Cambas closely watched Sophie, supplementing her food and water, bringing her indoors more and more and playing with her, augmenting her life in positive ways, Erica said. For some time, their neighbor resisted their gentle attempts to let them take Sophie.

“The key event was during an aggressive thunderstorm. Sophie chewed through her cable, she was so frightened. He had her tied to a metal pole in the yard. She ran away and was gone a couple of days,” Erica said.

They found her reduced to skin and bones — more so than before — and with a dead-tissue wound on her front shoulder, ear, neck and leg. “You could smell the rotting flesh. We thought she’d been hit by a car. Her skin was hanging,” Erica said.

Erica said with its proximity to the equator, most of Grenada is fast-growing jungle vegetation, and its landscaping is in constant need of being cut back. People there walk around doing yard care with machetes and weed whackers. And Grenadians are generally fearful of dogs or find them to be pests like raccoons.

“Most of the dogs are abandoned, treated with no love. They’d rather see them dead,” she said. It appeared someone had possibly tried to kill Sophie in this fashion.

A veterinarian said Sophie sustained a cutlass wound, a common injury for dogs there.

“She was in absolutely horrible condition. We told the owner, and despite that, he was just going to tie her up outside. I said to him, ‘Absolutely not, this is not OK. I am going to clean her up, get her weight back on. Come back in a week.’ We gave her nursing care, and he was fine with it, said ‘Thanks for doing that.'”

She said medical supplies were hard to find in Granada, so she and Sergio used items around their little house by the water: a garden hose  to clean out the wound, Q-tip cotton swabs and small packs of Neosporin.

“But the wound was so big, tape wouldn’t hold it because of her fur. So we cut up a T-shirt for her to wear as a vest to prevent licking off the medicine.”

Throughout this ordeal, the owner showed zero interest, Erica said. The Cambas offered to teach him how to care for Sophie, but he preferred she stay with them. After a month or two, they expressed the desire to adopt her, stressed her medical needs, took her in for shots and immunizations.

The Grenada Society for the Prevention of Cruelty to Animals is run by veterinary students from the university.

“They knew the dog, confirmed the owner, and had been trying to remove her because of neglect, had reported it, but no one would step up and tell him,” Erica said. “And then here we are.” They helped with updating her records, and the Cambas paid for all of it.

“Her wounds were healing. There was just this big soft scar,” she said. Over dinner they discussed adopting Sophie with  their neighbor.  “We tried not to make him feel forced. It seemed like he didn’t want her. He was struggling with school and substance abuse, and we suggested counseling, which he sought.”

He told Erica, “I know the right thing is for you to take her, you have the time to care for and play with her.” When he dropped by the Cambas for an occasional dinner, Sophie would run and hide.

They got Sophie off the fire but not out of the frying pan. When they left Grenada, they faced an onslaught of red tape to take Sophie with them. The animal-cruelty prevention group helped with the medical exam, giving immunizations within a prescribed time frame, and chased documents down.

“The GSPCA was so happy we had her and were taking her to the U.S. They were crucial in expediting so we didn’t miss our flight and could take her.” They called in favors, made extra phone calls and emails to coordinate for the Cambas, who were flying in a couple of days and needed papers that were only a week old.

The stress and hassle continued. Erica impressed on the airline that Sophie was a live animal, but even in her pet carrier, the airline checked her in as luggage —  scanned her as a suitcase. Bad weather out of Miami delayed the flight, then it was rerouted. Erica was frantic as Sophie spent 14 hours in her crate, in the heat of summer, and needed water.

“It’s a live animal. Doesn’t anyone know this?” she said. “Did Sophie leave Grenada? Was she misdirected to Miami? I tried not to be rude, but the flights were a mess. Our dog is lost.”

A gate agent finally listened to her urgent pleas and discovered Sophie was “lost luggage.” They got word to luggage department personnel, who located the crate, gave Sophie water and checked that her destination tag showed Portland.

“I tried so hard to keep it together. It turned into a 2½-day trip for a six-hour fight. When she got to Portland, she was just beyond ecstatic at my sister (Robin Jacobson’s) house. It was madness, the journey,” Erica said.

In the Grenadian vernacular, the 45-pound, medium-sized Sophie is called a “pothound,” Erica said. “With her big chest, she looks bigger than she weighs. She’s estimated to be about 4½. She was a scavenger, eating what she could find, so could be older,” Erica said.

After Sergio graduated, they packed up their stuff and came cross country to encamp with her parents,  Neil and Sherilyn Jacobson of College Place. The Cambas are newlyweds, having married on May 2, 2021, at Skamania Lodge in the Columbia River Gorge.

For the last two months, they’ve been visiting family around the Northwest, half that time with the Jacobsons, planned their wedding, visited Robin Jacobson — checked in with everyone they hadn’t seen for a while.

“My parents accepted Sophie with loving arms, have loved having her here,” Erica said. Her father has limited mobility, and Sophie amended her fetch game so he can throw her the ball.

While Erica lived with her parents for the year of nurse practitioner training, Sherilyn enrolled her dog Buster and Sophie in a Halloween costume contest at Petco. “Mom made Sophie‘s costume, which was a leatherback sea turtle, since that’s very authentic to Grenada. Sophie won first place.”

They are headed this week to Tuxedo Park, New York, for Sergio’s three-year residency that starts in July at St. Joseph University Hospital. Then Erica will start looking for a job.

“We are loading all our stuff in U-Haul pods to be shipped today,” Erica said on Tuesday morning, May 18.

“We’re excited our new home has a big yard. The landlord is planning for a fence,” she said. “It’s one exit away from a state park we used to drive hours to get to when living in Brooklyn. Sophie does so good on car rides, she watches ‘car TV’ out the window on a platform we build for her.”