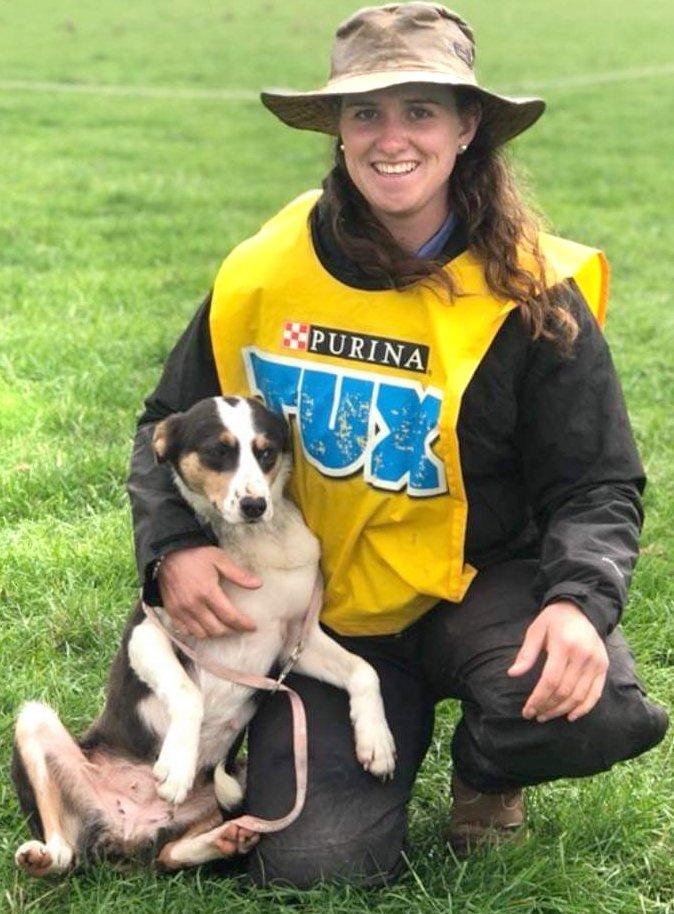 Erica Sharp has had a few pinch-me moments since taking up dog trialling last year.

They have included pulling on a Tux bib for the first time, and qualifying for next week’s South Island and New Zealand sheep dog trial championships at Greenvale, near Gore.

Miss Sharp (26), a stock manager at Glenaray Station, will be lining up with her maiden heading dog Lace, competing alongside legends in the sport.

The enormity of that was not lost on the young triallist, who was “gobsmacked” when she learnt she had qualified.

“It’s pretty hard to not get hooked when you have that happen,” she said.

Not from a farming background, Miss Sharp grew up at Kerikeri in Northland, where her parents had a lifestyle block.

As a school pupil, she did some relief milking at weekends and she decided she wanted to go dairy farming.

She came south to Telford to study and bought a heading pup in her first year, thinking she could still go dairy farming with a sheep dog.

But in her second year, she saw “the light” and decided to go shepherding. She initially worked as a junior shepherd at Nokomai Station, before spending a couple of years on a sheep conveyor and also tailing.

She loved tailing — “that’s my kind of work” as it was good fun and there was constant work for her dogs.

After some casual work, and a job on a farm near Pukerau, she started as a shepherd at Glenaray Station three and a-half years ago and had since “stepped up” on the expansive Northern Southland property.

She started dog trialling only last year and after she met successful Greenvale triallist Brian Dickison, he offered to help her train her dogs.

In January, she won the New Zealand maiden final in the Tux yarding event in Taupo with Grace.

“I think I caught the bug then, for sure,” she said.

Grace already had her sides and stop when Miss Sharp got her, although she had to do the dog trialling work with her.

She had bred Lace, who is Grace’s daughter, and so had trained her from scratch. It was nice to go out with her, knowing she had done it herself, she said.

The 5-year-old bitch was a slow starter and she has always been out on the farm with her mistress, who described her as “like a pet”.

“I’ve got a really incredible bond with her and her mother. They are soft-natured dogs,” she said.

Working at Glenaray was her dream job and it was also quite hectic at times, meaning she struggled to get enough time after work to do a lot of training.

Lately, she had been incorporating training with her day-to-day work, particularly as the days grew shorter.

She had 10 dogs, including her first two dogs, as she could not bear to part with them, and two pups from a litter Lace had last year.

Those pups were by Mr Dickison’s Cole, who was sixth in the long head at the recent North Island championships, and she was excited about their potential.

Miss Sharp took Lace to the North Island championships, where she said things went “not good” but she felt a little more confident about the Greenvale course, as she had been to a club trial there.

She found fellow triallists to be very supportive, and they welcomed and enjoyed seeing young people getting into the sport and also gave advice.

Admitting she got “disgustingly nervous” before a run, she also heeded a comment made by well-known triallist Murray Child, who said that showed it meant something, and it was good for competitors to be nervous.

Next week was going to be a busy one for Miss Sharp, whose cattle were starting on crop, but she would have time off on the days she was competing. Matt Clark, who also works at Glenaray, had three dogs qualified.

When it came to the future, she was hoping to get Grace qualified for open events for Tux yarding and while her goal was to get Lace in the run-off, that was probably a bit much to ask this year, so she wanted to have a really good season next year and try to break open.