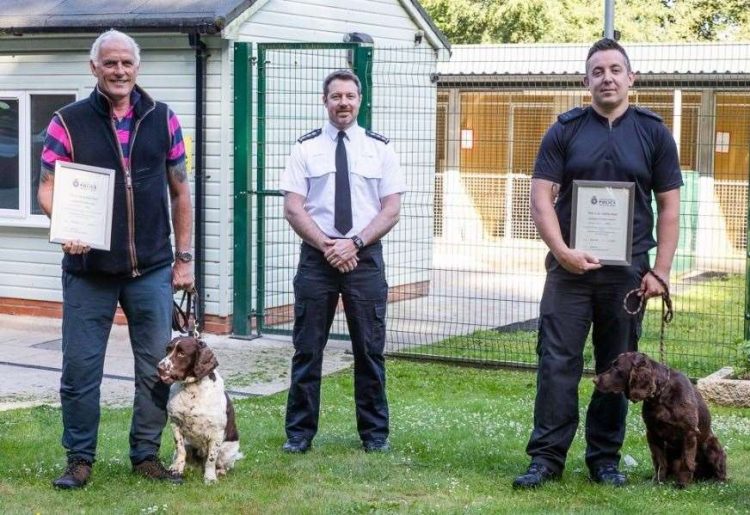 Gangsters, drug dealers and violent criminals have been put on notice after police welcomed two sniffer dogs to its team of canine crime-fighters.

Spaniels Coco and Sidney have just completed their training and are now fully qualified to sniff out drugs, cash, guns and ammunition on live police investigations.

Coco and Sidney, who were already partly trained by other forces, underwent a further three weeks of training before being assessed by an external force at an exercise in Newark — which saw the pair sniff out drugs hidden in cars.

The dogs, both two years old, were formally welcomed to the force at a ceremony at force headquarters last Friday morning and are now ready to take on live operations with their experienced handlers.

Nottinghamshire Police has a total of 20 dogs currently on its books — 13 general purpose breeds for tracking and chasing down suspects and seven specialist sniffer dogs.

Chief Inspector Simon Allardice said: “As you can imagine, criminals who have these things in their possession are usually very keen that nobody else should get their hands on them — especially not the police. As a result, they can be incredibly cunning in how they hide these materials in their homes, businesses or vehicles.

“A large human search team will often find those things in the end, but there really is no substitute for a dog’s amazing sense of smell. It really is incredibly difficult for criminals to hide things from a well-trained dog and I am really delighted that we are now adding the number of specialist sniffer dogs on the force.

“This gives us greater capacity to carry out proactive searches and will also allow us to carry out more passive drug detection operations in our town centres.”

The new recruits have also been joined by Buddy, a new Labrador puppy at the start of his training.

Police and Crime Commissioner Caroline Henry has recently granted additional funding to the force to allow it to expand its dog section.

All sniffer dogs have their skills re-examined every year to ensure the continued confidence of the courts.

Expert dog trainer Bob Newham, who works with police forces all over the country, has been leading the dogs’ training. He said: “Over the last three weeks we have been introducing them to all sorts of different environments that they will have to face going forward with their handlers.

“Part of the training we deliver uses a brick wall where we hide the various scents that the dogs are trained to detect. When they the demonstrate the correct behaviours we want they are rewarded.

“Coco and Sidney have both performed really well in their training and I am delighted that they have now met the required standard we expect of them. I am sure they will be a great resource for Nottinghamshire Police going forward.”

Nottinghamshire Police and Crime Commissioner Caroline Henry said: “I’m a great fan of Nottinghamshire’s canine crimefighters and the vital work they do to keep criminals off our streets.

“There is no limit to the expertise and skills of these dogs — you only have to look at the long list of arrests and drug and cash seizures to realise the huge value and support they bring to operational policing.

“I am delighted to have funded the expansion of the dogs’ team with the addition of PD Buddy a month ago. This is another important milestone for the unit and I’m sure Coco and Sidney will waste no time in repaying their trainers’ faith by keeping their noses firmly to the ground.”

Dogs to the rescue, as canine lifeguards save struggling swimmers on Italian beach

Dogs to the rescue, as canine lifeguards save struggling swimmers on Italian beach