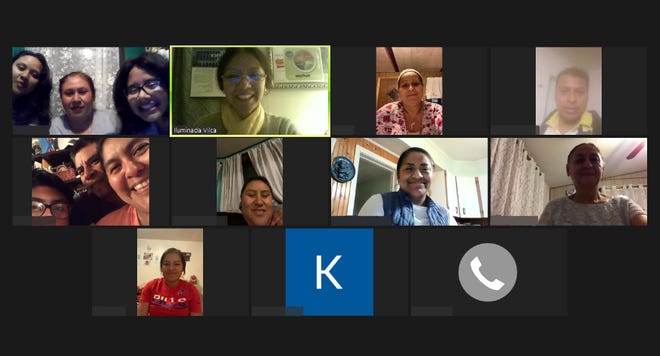 
Growing up, Leila Cassandra Bocanegra, 26, was used to eating the traditional Mexican food her parents, immigrants from Monterrey, would make. She acknowledges that some of the food, consisting of lots of tortillas and breads and meats, were heavy.

But with the Fruit and Vegetable Prescription Program (FVRx) run by Cornell University’s Cooperative Extension in Monroe County running several clinics in the Finger Lakes, Bocanegra and her family have learned that it’s possible to eat healthy while also eating foods with cultural significance.

“You can still have the food you love, but you need to read nutritional labels, and have balance,” said Bocanegra.

The Fruit and Vegetable Prescription Program is a federal initiative started in 2014 which looks to make fruit and vegetables accessible to underserved communities nationwide.

Iluminada Vilca, a nutrition educator at Cornell Cooperative Extension, has been working with the FVRx in Monroe County for four years, but she says the participation rate has gone up since the pandemic hit.

The way the program works is that doctors in participating clinics like the Finger Lakes Community Health and Wilson Health Center refer the patients, and the patients take classes with Vilca, where they learn about reading food labels, nutritional breakdown of foods, how to incorporate fruits and veggies into their diets, and how to exercise at home.

From June 2020-June 2021, the FVRx program in Monroe County needs to serve a maximum of 900 people, and so far they have served more than 500. The grant, which comes from New York State’s SNAP-ED, has been renewed until June 2022.

“When we used to do it with in person,we saw a need from Mexican farmers and migrant workers who would go to the clinic, and the doctors would tell them they need more nutritional education,” Vilca explained. “The doctors refer the patients, the patients come to the classes, and we give them $15 vouchers to trade at the Foodlink Trucks for fruits and vegetables.”

Rosa Jaramillo, who was referred to the program by her doctor for being overweight and struggling with diabetes, is thankful it exists because she was able to get physically healthier just by making better food choices.

“With the classes that I have taken I have learned how to eat healthy, how to buy things that are healthy for me, how to study the labels of everything I buy, and also to try new recipes to eat new foods and how to prepare,” said Jaramillo.

“We look forward to sitting in front of the computer and doing the exercises, and having them through Zoom is easier. I have classmates who take the class while making errands or walking their dogs,” Bocanegras said.

“When we have the classes, everything we give is what your body needs to make the immune system stronger,” said Vilca.

Vilca offers classes in both Spanish and English, and in order to get a referral, you have to be a patient of participating clinics — Finger Lakes Community Health and Wilson Health Center.

Natalia Rodríguez Medina is a bilingual reporter covering the Puerto Rican and Latino population for the Democrat and Chronicle in partnership with Report for America. Follow her on Twitter at @nataliarodmed or email her at nrodriguezmedina@gannett.com. You can support her work with a tax-deductible donation to Report for America.