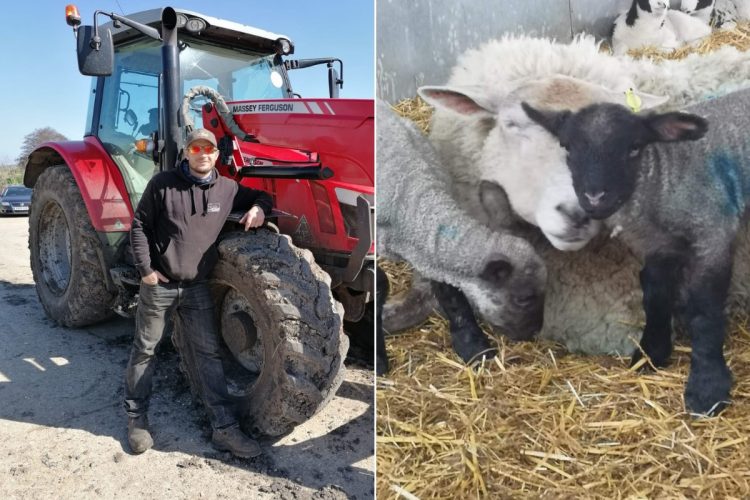 A FARMER is pleading with Basingstoke dog owners to keep their pets on a lead after his sheep were attacked.

Frustrated Ed Chapman, 31, of Blacklands Farm in Old Basing, said 100 of his sheep are currently pregnant and the stress of being chased or bitten by canines is having a disastrous impact and could lead to them having to have abortions.

“I have had enough. This morning we have had yet another dog attack,” he told The Gazette.

“My message to dog owners is please, please keep your pets on your lead. Sadly, farmers are legally allowed to use force and I can tell you now, if some farmers see dogs attacking their sheep they will shoot.”

Ed cited a recent horrifying case where a farmer in Chichester lost 116 sheep due to a dog attack – believed to be the largest tragedy of its kind.

Mr Chapman, of Blacklands Farm in Old Basing, said some dog owners aren’t honest when something goes wrong – and they will often walk away rather than alerting the farmer.

“Dogs should be on a lead if they are in a field with sheep. Even a tiny little poodle that looks like butter wouldn’t melt will still have canine instincts which are to hunt.

“It is hard to prove it because nine times out of ten, you will just turn up in the morning to find a dead sheep in the field. Or you might notice the sheep are panting, out of breath, because they’re distressed from being chased.

“Dog walkers will very rarely hold their hands up and admit what has happened. It’s almost like they are embarrassed but I think most farmers would be more accepting [if they let them know].”

He added that his advice to people if their animal has injured a sheep is to find out who the farmer is and get in touch.

Mr Chapman said it is a huge issue and spoke about how the stress and worry about the welfare of his sheep was causing anxiety.

He said: “Mentally, it leaves you feeling anxious every day not knowing whether you’re going to find a dead sheep or a gate opened or your crops trodden on.”

According to the Farm Safety Foundation, some 84 per cent of farmers under 40 believe mental health is the biggest danger facing the industry.

And unfortunately, this isn’t the only problem he has to contend with. Since the start of lockdown, Mr Chapman said the increase in people out enjoying the countryside has presented new problems.

From chucking signs in rivers to leaving a trail of rubbish, he has witnessed walkers treading all over his crops. Recently, he found a tent ditched by the side of the river with beer bottles which he had to clear up.

And there have been more serious incidents too.

“During the first lockdown, two men walked straight through a cropped field, causing damage to our crops. My brother asked them to use the footpath instead and they became really threatening.”

He said: “It may seem like nothing [walking through a field], but it can affect the crop and stop it from growing which costs farmers money. There isn’t a lot of money in farming as it is.”

Mr Chapman said farming was “in his blood” and he got involved in the profession a few years ago, after initially working as a tree surgeon.

“The biggest message is to please keep you dog on the lead and if you go through a gate, please shut it behind you. Please leave the countryside how you found it,” he added.

What is the law on dog attacks on sheep?

Dogs attacking sheep is a serious crime that can result in crime charges and insurance claims, if causes a loss for farmers.

The RSPCA states that dog owners should keep their animals leaded in fields with sheep and only let dogs off lead if confident there is no livestock nearby.

Luisa Dormer a former scientific information officer from the RSPCA farm animals department has sheep of her own, and has witnessed first hand the results of sheep worrying.

She said: “We’ve had two separate dog attacks since the beginning of the year which has resulted in the loss of unborn lambs and injuries to our sheep. During one of the attacks, half of our flock collapsed due to exhaustion.

“One of the most concerning things was the reaction of one of the dog owners following the attack, who commented that there was no damage done as there was no blood drawn. The reality is that the stress of being chased alone is enough to kill a sheep.

“Having sheep isn’t just a financial investment, but also a way of life and a passion. We care for each individual and work tirelessly to ensure that they’re happy and healthy; it’s so upsetting that all our hard work can be undone so easily by a single incident.”