One of the last cowboys of Dade City 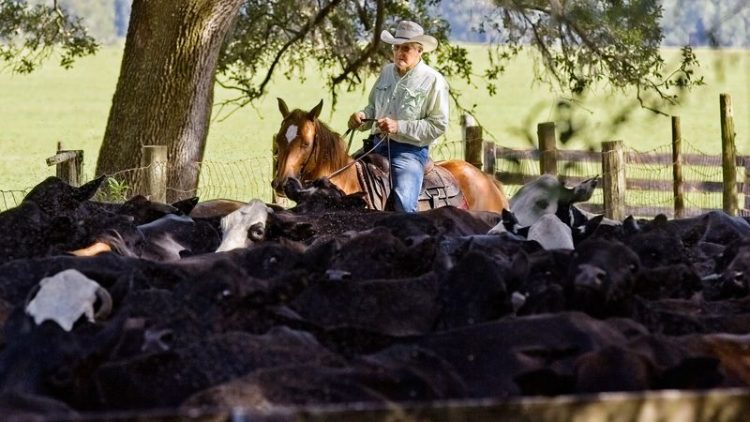 Randy and Mark Barthle of the Barthle Brothers Ranch have watched encroaching suburbia eat up ranch land in Pasco County over the years, but they’re still holding out.

At one time, their grandfather, Joseph Albert Barthle (pronounced Bartle), owned 20,000 acres. Now, the brothers and other relatives own about 8,000 acres.

Their grandfather bought the land at rock-bottom prices during the 1940s. Because of the housing boom, it’s now worth millions. Randy Barthle, 71, talked with the Tampa Bay Times about the lifestyle and the threat to it.

What do you think of the changes in Pasco over the last few decades?

There’s just so much development. I just try not to think about it too much because I know how people want to move here. People want to move to Florida and these developers certainly want to build them houses. But, you know, the biggest problem in my mind is the fact that the developers force the sale of property. There’s a lot of ranchers who would never sell out, except for two things. First off, the developers wanting land, and (that pushes) the prices and the value of the land so much higher. And then they get caught in an inheritance tax bind and they can’t possibly pay the taxes.

Have the taxes changed over the years?

The amount that you don’t have to pay taxes on has gone up over the years. … It was only like $165,000 when my grandfather died. He’d bought all this land for $2 to $3 an acre and he wasn’t all that concerned about inheritance taxes. …

They did finally change that $165,000. They raised it to somewhere like a million that you could pass without having to pay taxes, and then … that land just kept going higher and higher, and it was moved up to $10 million. … That’s the way it was when Obama was president. Now Biden wants to move it back to $3.5 million.

You told the Times in 2006 that you didn’t know if you could live with yourself if you sold the ranch. Do you still feel that way?

Well, I still do.

What is it about the lifestyle that you like?

What is there not to like? … You get to spend a lot of time outside. You’re in nature. And I always figure there’s not (a) much better day than when I can get on a horse and still work cattle. When you get them to the pens it gets to be a lot of hard work. That’s what we’ve been doing for the last three days, working cows in the pen, and getting caught in thunderstorms, working through the mud. … But still, you’re working with the cattle. There’s not anything that I really don’t like to do except maybe fixing fence. That gets to be kind of old. We’ve probably got 150 miles of fence. There’s always something wrong. Trees fall. Bulls get to fighting and one pushed the other through a fence. Lightning hits something.

Do thunderstorms spook the herd?

If you happen to be driving in the direction that the wind is blowing, you can keep right on traveling. But if you’re trying to drive them north and all of a sudden there’s a storm coming in from the north, if it’s really bad and the wind starts blowing, they don’t want to move. They want to turn their butts to the wind and stand there.

When you’re rounding up cattle, how many people does it take?

We can pen a couple of hundred head with only five people and a few good cow dogs.

In Florida, it’s a different kind of dog. It’s usually some kind of a cur or hound type. You don’t actually train them. The only thing you can teach those dogs is to come back when you want them to and to stay with you. They either want to go circle up and work cattle or they don’t. There’s no such thing as taking them out and training them other than sending them with some older dogs.

On the 4,600 acres you own, you have about 600 head of cattle, and sell the steers and most of the heifers for the beef market. Brahmans, because they easily adapt to the heat, is a popular breed to cross with another, is that correct?

But (Brahmans) cross really well both on Angus and Hereford. … All our crosses are F1 crossbreeds; that means they’re (from) the first cross.

What’s the best breed to cross for the beef market?

The (American) Angus Association has done a tremendous amount of work on marbling, on getting their cattle to grade choice. That’s the ultimate goal, is raise a steer that’s going to get to be 1,200 or 1,300 pounds and go to grade choice, because that’s what people like to eat.

Are you going to sell the ranch eventually?

No, I don’t think so. I’m not too worried about it because, personally, all three of my children are very successful without it. One veterinarian, one pharmacist and the other one is a commodities broker. … But they’re all interested in coming back when they can. My son and his two daughters and one grandson were here for the last three days because they were helping us work cows. They always like to come back when we’re working cattle.

Ranch work is good for bringing up kids, you say.

There is no better place, no better way in the world to raise kids. They grow up here and they know how to work. And whether they’re into ranching or not, which most of them are not, they go into other disciplines and they don’t have any trouble being just as good as anybody at it.

Actually, this is the fourth generation. … I think 13 of them have graduated with at least a bachelor’s degree, about five of them have advanced degrees. Pharmacist, commodities broker, a lawyer, a psychiatrist – they all grew up here. They knew how to work before they ever left here.

For more information, go to www.barthlebrothersranch.com.