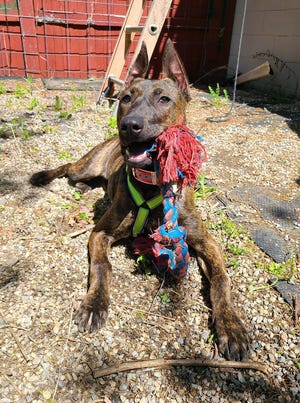 CLINTON – The COVID-19 pandemic was hard on many people, but also animals, many of which have been innocent victims.

“From rescues that depend on donations or zoos where the animals actually missed the people coming to see them,” said Paul Wood, animal control officer for the town of Clinton. “Even though the lock down inspired people to adopt many animals, many didn’t think far enough ahead to understand what that care would entail. Many animals are now being taken back to the shelters.”

In some cases, like Ziva, they are being abandoned, Wood said.

“Animal control as seen an uptick in dogs under 1 year being let loose to fend for themselves. Many ending in tragedy in fighting situations, starving, or under car wheels,” he said.

Ziva is a “pandemic pup” that was dumped in May. She was found running down Route 70 between Boylston and Clinton. Only about 5 months old, Ziva was scared, Wood said.

It is believed Ziva is Dutch Shepherd mix.

“Whoever her owners were cropped her ears and docked her tail, making her look more like a Doberman,” Wood said, adding, “She’s a beautiful brindle girl. Given her breed, she’s very strong, smart and very energetic. This is a breed that needs training, boundaries and socialization, which she was never given. When she grew from a cute little puppy into this strong, jumpy, mouthy dog, the owners couldn’t handle her. With the lack of training and socialization, she has become dog ‘aggressive.’ This prevents any shelters from taking her.”

Ziva remained in custody of Clinton Animal Control for 30 days with no help in sight.  Law states if she can’t be adopted or placed, stray animals are to be euthanized.

“We took her once to the vets to be euthanized, but couldn’t do it. With the help of Clinton Veterinarian Hospital, we brought her back home,” Wood said. He and his wife,  Linda, took the dog on personally.

“Over the last several months, she has been evaluated by several trainers and all feel she should be given a chance. I’ve been working with her and have found she is really a sweet girl with so much energy she doesn’t know what to do with it,” he said. “She can now walk on a leash without too much issue. Her whole butt wiggles when she’s happy.”

Wood said Big Hair Animal Rescue has agreed to take Ziva in if they can raise money for her training; $2,500 is needed.

The Woods have set up a Go Fund Me page to raise the money needed.

All funds, except for GoFundMe fees, is sent directly to BHAR through PayPal Giving Fund. The rescue can take Ziva after Labor Day.

Wood said, unfortunately, Ziva is not an isolated case. Two other dogs were possibly dumped over the weekend. But, for now, Wood is concentrating on Ziva.

“She is just a puppy and people failed her,” Wood said. “Please help save her from being euthanized. This is her last chance. I have no where else to take her.”