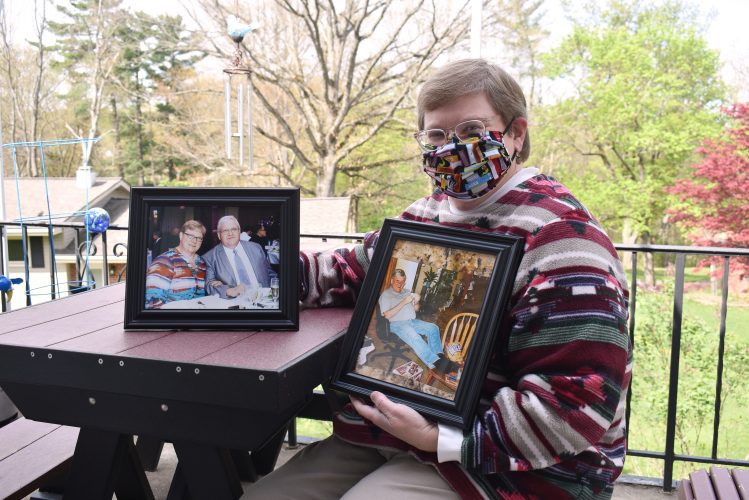 Carrie Wolfgang assumed the worst of the COVID-19 pandemic had passed.

The numbers, released daily by the Chautauqua County Department of Health and reported by the media, had long come down from the early months of the pandemic when dozens — if not hundreds — of new confirmed cases were recorded.

But that didn’t mean Wolfgang and her longtime partner, Brian Bernhardt, didn’t take the threat of COVID-19 and its impact seriously for more than a year. She previously had pneumonia and thus a weakened immune system while Bernhardt — who long preferred a quiet, personal lifestyle that often kept him indoors and away from people — had virtually no immune system at all.

“Brian, doing what he did, liked being alone, that was his routine,” Wolfgang said of her partner, who tragically died April 26 at UPMC Hamot in Erie, Pa., at the age of 58. “Whenever we would go out Christmas shopping, he would get sick that first night. He had absolutely no immunity. So when COVID struck in March 2020 … Brian went into shutdown mode as I did. He knew if he was exposed he would get it. We really avoided everything. We went nowhere and wore masks all the time.”

The two Jamestown residents were on alert, and each looked out for the other even as new cases of the coronavirus trickled to a crawl entering its second year in the United Stares.

Bolstering hopes of getting past the highly contagious virus was the fact that Bernhardt was scheduled to receive his first dose of the COVID-19 vaccine April 2. Once he was set, Wolfgang planned to schedule her own shots.

However, on April 1, a day before Bernhardt was to get his first dose, Wolfgang began to feel sick. At first she assumed the ill effects were the result of allergies or the beginning of a sinus infection. But after having a cup of coffee and getting sick, Wolfgang — a retired nurse and currently the owner of Novel Destination book store on Fluvanna Avenue — knew something was wrong.

“Even with the health department, they were never able to determine where we got it from, or what our connection was,” Wolfgang said. “On April 2, he was to have his injection. That was the irony of the whole thing. He was approved for a Moderna shot after waiting all this time.”

A LOVE OF DOGS, AND A SETUP

Naturally shy, Bernhardt preferred to live a quiet life “behind the scenes.” He graduated from Panama Central School in 1980 and landed a job in the summer of 1984 at Blackstone-Ney Ultrasonics in Jamestown. There he worked as an electrical engineer in charge of research and development.

Wolfgang said Bernhardt was always good with his hands. “He just wanted to do what he did best — take things apart and find a way to make them perform at their best,” she said. “He was a man of science and grace.”

Laurie Adatepe said her brother was the more inquisitive one of the two as kids, often seeing him emerge from his room with lights and alarms going off. “He was the inventor, I was the book person and could tell you how something worked. But he could go and actually build it,” she said.

Bernhardt was also known for his love of dogs. His obituary notes: “He never met a dog he didn’t like and his little princess dog, Mattie, survives him.”

Wolfgang and Bernhardt had met years before, but it wasn’t until her mom and his mom “conspired” to set the two single adults up in 1998. By that point in the late ’90s, Wolfgang was divorced and Bernhardt remained a bachelor.

“I don’t know how the two of them did it,” Wolfgang recalls of the setup. “His mom was concerned he would be alone forever, and I had been divorced for a number of years. But they conspired, oh my gosh, those two. They got his email, and this was before communicating like that was a big thing. And he was all about the electronics and gadgets. I was into none of those things. His mother told him that he would be getting an email soon and that he should respond to it.”

“I didn’t routinely send a bunch of emails, but that day I did.”

Just weeks after COVID-19 was declared a global pandemic, its impacts were felt close to home. Bernhardt’s niece and her husband, both school teachers in New York City, became seriously ill toward the end of March 2020.

“He saw what they went through and what he would go through potentially,” Adatepe said of her brother. “He took it seriously.”

Adatepe’s daughter and son-in-law remained sick for about three weeks. Because testing supplies were scarce in the early months of the pandemic, it wasn’t until the pair received antibody testing that they were confirmed to have had COVID.

“They went through a lot and it took a long time to recover,” Adatepe said.

After testing positive for COVID-19 in April of this year, Wolfgang became seriously ill herself. Having worked as a nurse in Warren County and with her doctors located in Pennsylvania, she was taken to Warren General Hospital and placed in their COVID care unit. While in the hospital, she worried about Bernhardt, who she said didn’t seem like himself and didn’t talk much when the two spoke by phone. “I told the doctors, ‘I need to go home’ and they told me, ‘But you’re still in a vulnerable position,’ “ she recalled. “I told them I was afraid I was going to go home and find him dead.”

Upon finally returning home, she found her partner with extremely low blood-oxygen levels. Wolfgang had to call Adatepe, who traveled from her home in Mercer, Pa., and finally convinced her brother to go to the hospital.

Bernhardt remained critically ill at UPMC Chautauqua, where he remained on high doses of oxygen. He was intubated April 17 and then moved by ambulance to the COVID Unit at UPMC Hamot in Erie, Pa. He was eventually placed into an induced coma.

Upon arriving at Hamot, Wolfgang recalls a specialist telling her, “Just so you know, they did all the right things there at UPMC Chautauqua. They gave him all the right medication and treatment that’s part of our protocols. There’s just not much more we can do right right now.”

Wolfgang recalled the last night she was with the love of her life. “His fingers seemed to squeeze mine,” she said. “I know it may have just been some sort of reflection. I choose to believe that it was him telling me it was OK.”

Wolfgang and Adatepe are encouraging those who have not yet received the vaccine to schedule an appointment. “It’s a terrible thing to fight,” said Wolfgang, who even now is still suffering the effects of COVID-19, which she describes as being like in a fog.

For Adatepe, hearing of conspiracy theories or misinformation regarding the virus or mask use is difficult to take in following her brother’s passing. She noted the benefits of being vaccinated far outweigh the rare side effects some have reported.

The pair hopes others continue to take the virus seriously, noting that even those who avoid crowds and wear masks can still come down with COVID.

“He went to work and went home, that was his day,” Adatepe said of her brother. “He wasn’t out traipsing around and playing tag. He had minimum exposure and still got it.”

Will My Sense Of Smell Come Back? What ‘Smell Training’ Can And Can’t Do : Shots

Will My Sense Of Smell Come Back? What 'Smell Training' Can And Can't Do : Shots