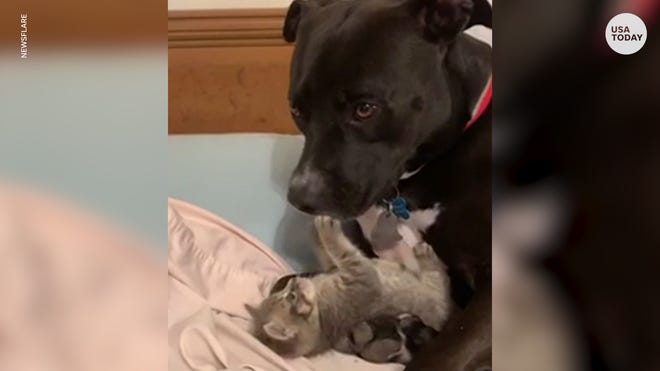 “We pull from kill shelters all over Missouri,” Stafford said.

In operation for 11 years, the dog rescue adopts out around 125 dogs a year, she said.

People Helping Paws is one of the charities that applied for donations through the A Community Thrives initiative, a crowdfunding program from Gannett, the Tribune’s parent company.

Last month, organizations applied to raise money for their projects, first raising money on their own through crowdfunding. Then, they will be eligible for one of 15 national grants of up to $100,000. Projects also are eligible for hundreds of community operating grants starting at $2,500, chosen by leaders from Gannett’s USA Today Network of more than 250 news sites.

More:Ragtag Film Society starts community conversations at the movies with the ‘Show Me Series’

There are no bad dogs, Stafford said.

“There are bad people out there who don’t do right by dogs,” she said.

Bully breeds are not naturally predisposed to aggression, rather, they are protective and high-energy, which can go south in the hands of the wrong owners.

The nature-centric television channel Animal Planet reported that “American Temperament Test Society, Inc. (ATTS), a professional organization that independently tests the temperaments of over 25,000 dogs across 200 breeds, concluded that bully breeds such as the American pit bull terrier, American Staffordshire terrier and Staffordshire bull terrier all rank in the mid-80th to low-90th percentile in terms of friendly disposition — on par with dogs such as the beagle and the Australian shepherd.”

People Helping Paws nurses dogs in its care back to health, Stafford said.

“We have trainers who work through our organization” to help eliminate bad behaviors or work through trauma, she said.

The rescue uses foster families or individuals to house the dogs until they can be adopted, she said.

It doesn’t have a physical location.

The rescue is the last and only chance for the dogs, she said.

A Community Thrives extends through Aug. 13. Learn more or give at acommunitythrives.mightycause.com.

One of the last cowboys of Dade City