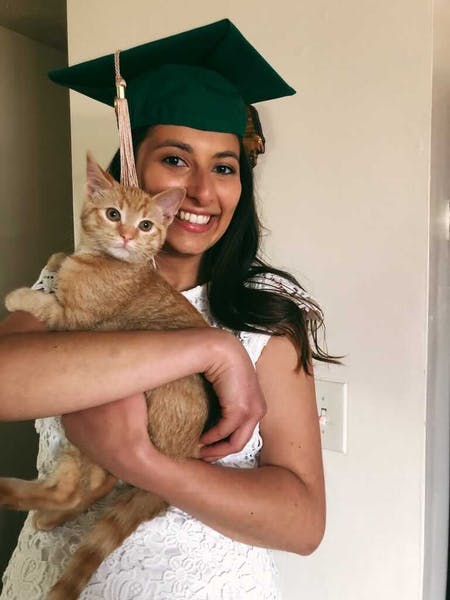 “I think during COVID especially that probably was the best decision I ever could have made was to adopt a kitten, or just an animal in general, because it honestly made me feel so much less lonely and anxious,” Kadar said.

Kadar was on campus until June with only her roommates and couldn’t visit family back home. Having two kittens in the house made the atmosphere much more positive.

She said that everyone needed them. Whether they were having a bad day or something was going on, there was always a furry friend to cuddle with.

Kadar also said that it’s good to have a pet for people who suffer from mental health issues as it’s good for them to have something else to focus on and care for.

“That’s why I’m a very big proponent of animals being especially in tune and attentive to humans and their emotions and will always be there for them,” she said.

Dooley says that the two kittens ended up becoming their best friends.

“It’s just really nice to have something to care for and have another living thing that has its own personality and shows its own affection in unique ways,” Dooley said. “ I think people that have pets really know the true value of them, especially cats. They’re such special animals.”

Dooley said that Wriggs has helped her through some tough times within the last year including the uncertainties of the COVID-19 pandemic. She had a lot of anxiety surrounding not really knowing what’s going to happen, with graduating at the beginning of the pandemic and not knowing where she was going to be.

“Handling all of that anxiety, having cats really helped that and even now that I’m in my full-time job and I work from home, it’s like any sort of anxiety that I feel whether it’s from work or about the pandemic, I can just go over there and give him a hug and it instantly just makes me feel better,” Dooley said.

Julia Willson, the president and CEO of CAHS Lansing, said that despite it being an overwhelming year, she’s proud of what the animal shelter has accomplished.

One of the challenges the shelter faced was being shut down March 24, 2020, through April 29, 2020. Staff weren’t able to come into the shelter, so animals were unable to stay there as well.

However, even this setback proved to have a positive outcome as people volunteered to take shelter animals into their homes. From that, Willson saw many people ended up adopting the pets they were fostering.

When the shelter opened back up, there was still a surge of adoptions which continued well after. Willson believes this increase in adoptions may come from the fact that people are working remotely so they had more time to be home for pets than before.

“I know that for a lot of people, their pets are their closest companions,” Willson said. “Maybe through the time of isolation with not being able to be with friends and family I think pets really came into the spotlight what a role pets play in our lives.”

She also said that if you are thinking about getting a pet but are not sure, consider fostering first. Fostering is where a person temporarily takes an animal  into their home to give them  a break from the shelter.

One should try rescuing an animal that’s had a tough time and really needs help.

“We love people that come to shelters, so that’s always our first recommendation,” Willson said. “Even though we had a great adoption year, there are still so many animals in our community that are going into shelters that need homes. So, we always suggest that people try your shelter first.”

Marie Hopfensperger, an assistant professor at the MSU College of Veterinary Medicine, said that having a pet comes with physical, social and emotional benefits, especially during a pandemic where a lot of people are feeling socially isolated.

Pets can help you foster connections with fellow pet owners and provide you with companionship, even if it’s as simple as waving to a neighbor while they’re out walking their dog, Hopfensperger said.

Pets not only bring mental health benefits but also physical benefits as well.

According to the Center for Disease Control and Prevention, studies have shown that “pets can increase fitness, lower stress, and bring happiness to their owners.” Health benefits also include a decrease in blood pressure, cholesterol levels, triglyceride levels and feelings of loneliness. Along with an increase in opportunities for exercise and outdoor activities and opportunities for socialization.

The Human Animal Bond Research Institute also conducted a study with Mars Petcare, which found that 85% of pet owners and non-pet owners agreed that interaction with pets can help reduce loneliness. Also, 76% agree human-pet interactions can help address social isolation, and 72% thought that human-animal interaction is good for their community.

“I certainly think that pet ownership can be incredibly fulfilling and beneficial for those of us who do enjoy the companionship of animals,” Hopfensperger said. “And I think they can be really beneficial for the pet as well as the person having those healthy human-animal bonds.”

Allie Klein, a political science senior, also ended up stuck in East Lansing during the pandemic. Some of her close friends were fostering a pit bull from CAHS Lansing who was the sweetest. On a whim, Klein decided that she and her boyfriend would apply as well.

They fostered a dog named Ozzie together who Klein’s boyfriend later ended up adopting. Klein said Ozzie was the best decision they’ve ever made.

Ozzie really helped during COVID with isolation and quarantining, Klein said. He made them feel less lonely.

“Ozzie the dog was really good for, he always kept my spirits up, he gave us a reason to get outside and to go for long walks everyday and to get out of bed because he needed us and he needed to be taken care of,” she said. “So, I think that was huge for our mental health, definitely.”

She also believes that CAHS Lansing does good work, and as someone who has a pet from them she believes they are angels over there.

“They appreciate you in a way that only a shelter dog could appreciate you because you’re kind of taking them from, a lot of the times, a really rough situation,” she said. “You know that what you’re doing is literally changing a life.”

This article is part of our Spring Housing Guide issue. Read the full issue here.