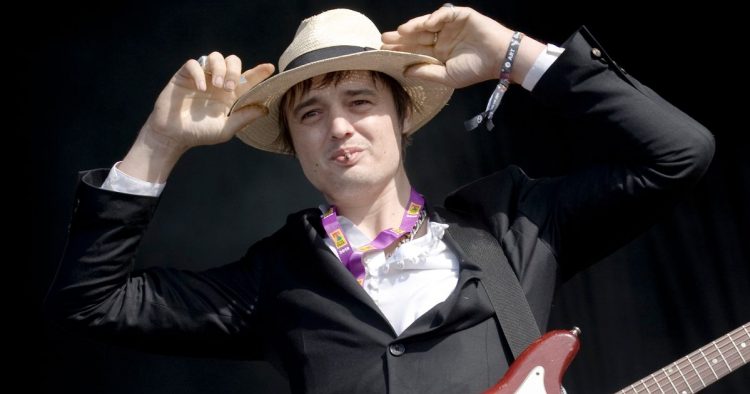 Pete Doherty looked totally different to his boyband heyday when he broke cover in France snacking on cheese.

His transformation includes a grey beard and moustache after he stunned fans with his new look in recent months.

Life for Pete has completely changed since his wild hey day and now he made the move to France to live with his girlfriend Katia De Vidas.

In The Mirror’s exclusive pictures, Pete was seen going about his day-to-day life in France.

Out and about, the Libertines and Babyshambles rocker munched on his favourite cheese while taking his husky for a walk in the area of Etretat, Normandy.

He was joined by Rafa, who plays with him in his latest band, Peter Doherty and the Puta Madres.

Also, the rock star had a newspaper to hand on his low-key dog walk last month.

His look was still trendy as Pete wore a flat cap and chino shorts for his outing with his pal.

It comes after Pete lifted the lid on his secret to his new look which everyone has been talking about.

The musician revealed cheese on toast is his new guilty pleasure.

Also, Pete said he was clean having stopped taking heroin and ketamine.

He told The Sun in March earlier this year: “I like Comté, Comté on toast. My guilty pleasure is sleeping.

“For years and years, I would stay up for five or six days and then I would sleep for 24 hours, so now I love sleep.

“At the moment I’m quite clean. I stopped taking heroin and ketamine.

“I like experimenting, making cocktails with champagne, a bit of rum, orange juice, I’m coming across like a bit of an alcoholic, but I’m not — I like a nice glass of water.”

In the 1990s, Pete was propelled into fame as the co-frontman of The Libertines.

His most high-profile relationship and turbulent love affair was with supermodel Kate Moss in the early 2000s.

Also, Pete had a close friendship with the late singer Amy Winehouse before she died.

Now the star has slowed down his once fast-paced celebrity lifestyle with his move to France.

Instead, in recent years, he has been living a much quieter lifestyle in the countryside with his girlfriend.

Many of his fans have complimented his new look on social media in the comments.

Among the sea of comments, one has said: “Peter looks so healthy! LOVE it!”

Others added: “Pete Looks Ace and sooo Alive, Glad seeing him like that [red heart emojis]”.

“Beard transforms you into a mature man”.