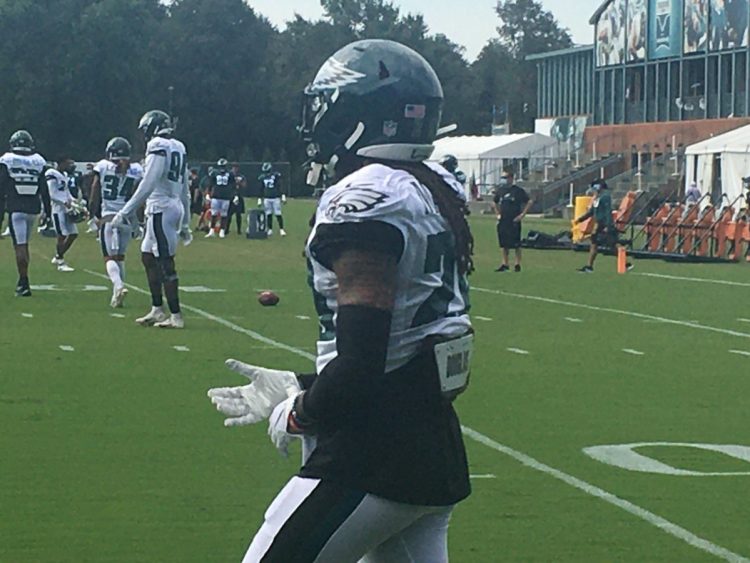 The most talked-about position of the offseason that doesn’t start with “quarter” and end with “back” is up next in our Eagles training camp position preview.

In case you’ve been out of the country, the position is cornerback.

It’s a position that has been talked about for years with the organization, which can’t seem to get it right no matter how hard it tries. In 2017, GM Howie Roseman took corners back-to-back, selecting Sidney Jones in the second round and Rasul Douglas in the third and, that summer, traded for Ronald Darby.

All three have since moved on to other teams.

In 2017, Roseman got it right in the draft, spending a seventh-round pick on  Jalen Mills.

Mostly, though, it’s been a collection of here-today-gone-tomorrow types, without much success rate.

Darius Slay is the top dog on the outside, but he is 30 and had to be imported from Detroit in a trade last year.

Who starts on the other side has been the question since last year’s 4-11-1 mercifully ended.

Maybe Michael Jacquet is developed into that kind of player.

Perhaps all the answers the Eagles need are right here right now.

Or perhaps there’ll be a backyard Big Foot sighting.

Chances are the Eagles are going to have to mix-and-match at the cornerback spot, unless Avonte Maddox takes to it in his second year on the outside.

It’s not just those two who have a shot at potentially shining.

There is no shortage of candidates, but how long-term worthy are they?

We are about to find out with training camp on the horizon.

Already, the defensive ends, tackles, and linebackers have been examined in this series.

Now, it’s time to look at the cornerbacks:

WHAT’S CHANGED: One of the anchors of the position is gone. That would be Mills and, while fans had a love-hate relationship with him, he played in 60 games after being a seventh-round draft pick in 2016, making 49 starts and intercepting five passes. His versatility, with the ability to play safety, will be challenging to replace this season.

Two other cornerbacks followed Mills out the door – Nickell Robey-Coleman and Cre’Von LeBlanc. Unlike Mills, however, who signed a four-year, $24 million deal on March 15 with the Patriots, NRC and LeBlanc are still free agents.

Dennard Wilson is also the Eagles’ DB coach and, of course, new defensive coordinator, Jonathan Gannon, has made his NFL bones by coaching the secondary, particularly cornerbacks.

HIGHLIGHT REEL: Slay gets the nod here by default. He had a better year in 2020 than some may want to give him credit for because all that is remembered are the big games that Seattle’s D.K. Metcalf and Arizona’s DeAndre Hopkins had against him, but Slay’s season was solid, and ESPN’s Jeremy Fowler ranked him as the league’s ninth-best cornerback.

It’s a giant puzzle for Wilson and Gannon with CB2 and the slot positions both up for grabs.

Maddox probably has the inside track on the outside, and maybe rightfully so. Growth from really his first year as a start on the outside to his second year could surprise. This is also his fourth year playing in an NFL secondary and the position typically takes some seasoning. Maybe Maddox has it now.

Maddox could be the slot CB and somebody like McPhearson or Jacquet step in on the outside. Or maybe McPhearson wins the slot job, or Scott or Taylor.

Veteran James cannot be overlooked, either, for a role at any of the spots, even though he is widely considered a special teams ace.

No doubt, there will be plenty of competition for playing time and it could be doled out to several players early in the season and perhaps even as the season goes along.

ROCKY (THE LONGSHOT): Nate Meadors. Is he a corner or a safety? What he is, and maybe this will help, is a product of the Minnesota Vikings system. He spent more than a year with Vikings, mostly on the practice squad though he was elevated for three games, so has some familiarity with head coach Mike Zimmer’s scheme, which in turn, gives him some familiarity perhaps with Gannon, who cut his defensive teeth with Zimmer.

Either way, Meadors will have to really open eyes early and often to find a home on the 53-man roster.

Ed Kracz is the publisher of SI.com’s Eagle Maven and co-host of the Eagles Unfiltered Podcast. Check out the latest Eagles news at www.SI.com/NFL/Eagles and please follow him on Twitter: @kracze.

Do I Need To Invest In A Dog Life Jacket?

Do I Need To Invest In A Dog Life Jacket?