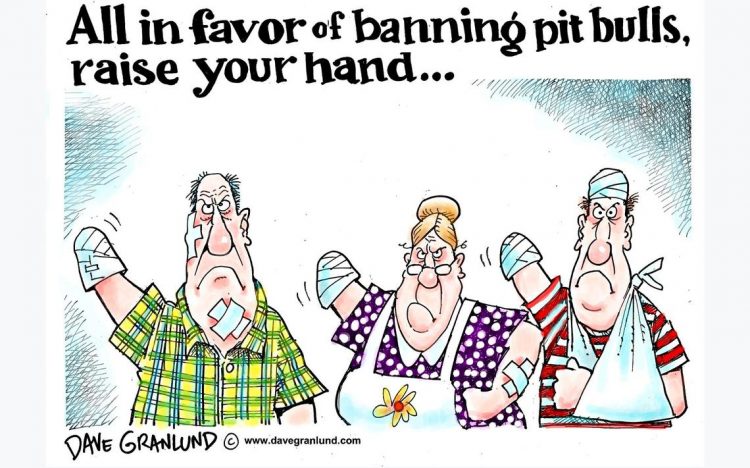 To address this problem, many lawmakers have turned to “breed-specific legislation,” a proposal or regulation that bans or places severe restrictions on owners of a particular breed of dog or dogs with certain physical characteristics.

Sadly, evidence shows time and again that breed-specific legislation is ineffective and even compounds the problem by glossing over issues associated with irresponsible ownership while creating a false sense of security for the community.

The reality is that any breed, put in a threatening situation, is capable of biting. By profiling dogs based only on breed or appearance, breed-specific legislation unfairly penalizes responsible dog owners of well-behaved dogs without holding owners of truly dangerous dogs accountable.

There are many inherent problems with breed-specific legislation. For one, it’s extremely difficult to enforce. Banning or restricting dogs based solely on appearance or breed punishes responsible dog owners, sometimes even including those who own well-trained service and working animals. It forces responsibly owned pets into local shelters from which they can’t be adopted and results in unnecessary euthanasia. Meanwhile, irresponsible dog owners are free to simply choose another dog and continue putting the community at risk.

In many cases, breed-specific legislation forces animal-control officers to become breed-identification experts to determine whether a specific dog is on the list of regulated breeds. Some communities have attempted to define a dangerous dog as any dog that has certain specific physical characteristics. Both approaches ultimately put the focus on appearance over behavior — and unsurprisingly, both commonly result in vague or inaccurate identification.

In November 2020, Denver residents voted to overturn their city’s 30-year-old breed ban. Prior to this, animal-control officers were estimated to conduct as many as six breed-identification evaluations a week — time that could have been spent focusing on real animal-control issues.

Breed-specific laws also lead to increased costs to the community if owners relinquish household pets at local shelters because they are no longer permitted to own them or able to comply with strict new regulations. In many cases, the owner is forced to choose between relocating to a different city or relinquishing a pet. As a result, many dogs end up at municipal shelters where they must be housed and/or euthanized at taxpayers’ expense rather than remaining in loving homes. Denver’s breed-specific laws cost the city $6 million per year to implement.

In Wyandotte County, Kansas, Kansas City’s Animal Services spent 25% of its $1 million annual budget enforcing a breed ban. In addition, the Humane Society of Greater Kansas City was forced to spend additional money on pit bulls in their shelter because they could only adopt those dogs to people not located in the county, causing these dogs to spend more time in the shelter than other dogs.

When Wyandotte County repealed its ban in 2019, the cost savings provided the county’s animal services with a windfall it used to upgrade animal housing, hire additional staff, and microchip every unchipped shelter animal before rehoming it.

The bottom line is that breed-specific legislation simply does not address the real issues of irresponsible dog ownership and community safety. The best approach remains the simplest: Consider the deed, not the breed.

All dog owners — regardless of their dog’s appearance — need to be held accountable for the behavior of their pets. Comprehensive, breed-neutral, dangerous-dog laws provide animal control and law enforcement with clear, measurable guidelines and appropriate penalties for any owner who is irresponsible or owns a dangerous animal.

Breed-specific laws may seem like an easy fix but actually cause further harm to the community. Comprehensive breed-neutral, dangerous-dog laws are more complex but pay off exponentially when it comes to protecting responsible dog owners and communities.