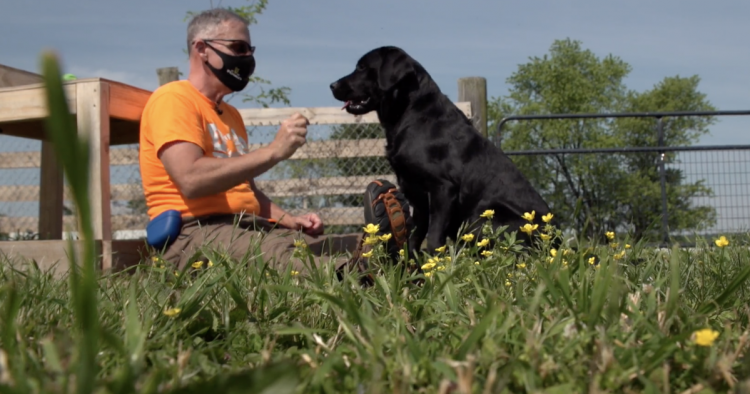 BOYDS, Md. — Dole is a rambunctious black Labrador and loves being outdoors. He’s a service dog-in-training and is still getting schooled.

“Well, he’s a little bit of a goof, which is probably why they matched him with me,” said retired U.S. Air Force Col. John Bryk.

Col. Bryk is Dole’s trainer, having worked with him for nearly a year.

“I started out launching nuclear missiles in North Dakota,” Col. Bryk said. “I ended up a few years later launching space shuttles in Cocoa Beach, [Florida], and then towards the end of my career, I became a diplomat.”

Upon his retirement, though, he sensed things weren’t quite right.

“It didn’t occur to me that I might be having issues with PTSD,” he said. “I got evaluated by the VA and they said, “Hey, you know, you might want to consider this.’”

They suggested he connect with the Warrior Canine Connection, a nonprofit training center for service dogs, nestled on 80 acres of a former dairy farm in Maryland.

The dogs in training will eventually be matched with a wounded veteran, and the trainers are veterans themselves.

“We engage wounded warriors, those struggling with psychological injuries, mostly in helping to train our dogs,” said founder Rick Yount.

A licensed social worker, Yount came up with the idea for the Warrior Canine Connection 15 years ago. Since then, they’ve helped 5,000 veterans.

“It’s impacted many, many people,” he said. “We call it Mission Based Trauma Recovery, and we’ve had hundreds of dogs involved as well.”

Some of the dogs in the program who don’t end up becoming service dogs, end up as breeder dogs. The resulting puppies will eventually be evaluated to see if they are fit to be service dogs.

An online puppy cam allows people from around the country to see what they’re up to at any time. When they get a bit older, their training will begin.

“These veterans give so much to their country and sacrifice so much,” said Sarah Delcore, who works with the veterans and dogs at the Warrior Canine Connection. “The least we can do is give them a tool to be successful moving on with their life.”

For Col. Bryk, his training time with Dole was nearing the end.

Then, he got a surprise.

“The whole time, I had in an application for a service dog of my own. I came back in for an interview about three weeks ago and the next day I got a call like, ‘Hey, we’ve got just one more question for you.’ I’m like, ‘Okay, what is it?’ And the question was, ‘Would you like to be matched with Dole?” he said with a laugh.

Later this month, the two of them will get the chance to finally go home together.

In addition to Maryland, Warrior Canine Connection has training facilities in California and North Carolina. Their service dogs are placed with veterans all over the country.

Your area’s most pampered dog breed has been revealed

Your area's most pampered dog breed has been revealed