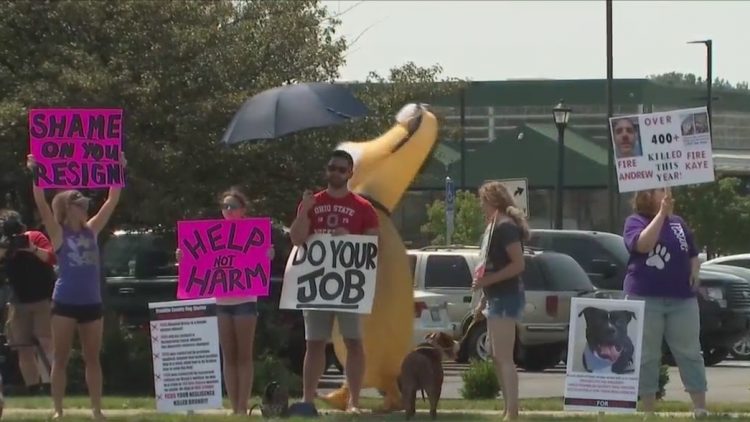 COLUMBUS (WCMH) – An animal cruelty investigation is underway after a dog named Bruno Marsten died about two months after being adopted from the Franklin County Dog Shelter.

A group protested outside the shelter Sunday on Bruno’s behalf.

Stacey Brown organized the protest, saying the shelter needs to do more thorough screenings before a dog gets adopted, and conduct follow-ups after the adoption.

Brown said someone contacted the shelter’s communications specialist with concerns about the man who adopted Bruno, but she said no one listened.

A Franklin County Dog and Adoption Center spokesperson said they were made aware of the concerns a day after Bruno was adopted.

“They say they do follow-up calls, but most people I’ve talked to never got a follow-up after adopting,” Brown said. “If so, they’ve done one maybe at three days. It puts a lot of dogs in danger. A lot of dogs end up getting returned because their owner wasn’t the right fit because they didn’t do the proper checks.”

“We don’t do any thorough screening, but we do ask questions about a person’s lifestyle and ask them if they have any needs,” said Dwayne Young, assistant director of operations for the shelter. “This is supported by a lot of national organizations and animal welfare. Just to name a couple, Humane Society of the United States. We encourage people to call, ask questions if they feel uncomfortable.”

The adoption center is waiting for the results of the investigation into Bruno’s death. At this point, no charges have been filed.